Translation: “June is Not a Time For Forgetting.” The End of Shanghai’s Non-lockdown

Journalist Lian Qingchuan’s reflection on Tuesday’s relaxation of COVID control restrictions in Shanghai was originally posted on WeChat, but deleted for “violating relevant laws and regulations.” Lian subsequently reposted it on Twitter with the comment, “Another 404. Of course, I knew that what I was saying was absolutely not what they wanted to hear.” The text is also archived at CDT Chinese.

Although the essay does not overtly mention Saturday’s anniversary of the 1989 June 4th crackdown, it alludes to it repeatedly: with its opening sentence, its reference to a 1989 Woody Allen film, and its talk of memorials and the dangers of forgetting the past. It also alludes to the recent death of Lian’s mother, to whom, as he described in another deleted WeChat post, he was unable to pay a final visit because of “this thing we can’t even call a lockdown.”

June is not a time for forgetting.

At one a.m., we scan the venue code, and step out of the residential compound.

Perhaps because we’re in the suburbs, there’s no air of jubilation, and pedestrians are sparse, but already a few diners are sitting outside a restaurant, eating.

The Henan braised noodle shop is the only place open. Everything else is in darkness. The barrier fencing opposite is unchanged, as much of an eyesore as before.

There’s no joy, no excitement, nor even the slightest stirring of the heart. 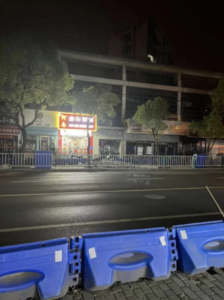 The end of the lockdown is as muted as the announcement itself: no fervid neighborhood committee announcement, no big show of celebration from the news media, no fanfare declaring victory.

No one even bothered to give us an explanation.

Who is it—whose great authority, whose will—that in this modern 21st-century world holds such power over an enormous city and all its people, the fearless power to give or take, to spare or kill?

As our WeChat Moments circulated, the term “end of lockdown” never arose—naturally, it was the same with “city lockdown.” So for these past two months and more, the whole of Shanghai was like a clump of roadside weeds, something to be expediently discarded,and now, when it suits, expediently picked up again.

Why should we be joyful? What do we have to celebrate? Right now, shouldn’t we really be crying our eyes out?

There’s already congestion on the Yan’an overpass, people on the Bund are starting to dance, and people in Beicai’s roadside stalls are cracking open drinks. Of course, I can’t blame them for their indifference. How could anyone with a heart blame those who were unfairly shackled for now wanting to enjoy the “life” they’d missed out on for so long?

Yes, this was none other than our former life, and on June 1, this holiday that used to belong to children, we set off fireworks, sang and danced our hearts out, and drove around like maniacs, celebrating a day that should never have needed celebrating in the first place.

We might be able to believe that the disaster is now past, and limp into the future with our newly restored spirits, but if we choose to forget, there will always be another disaster lying in wait for us.

Am I wrong? Haven’t we seen enough disaster already?

In his 1989 film “Crimes and Misdemeanors,” Woody Allen said that forgetting is a kind of healing mechanism that humans have come up with. When suffering becomes too great, people deliberately forget their pain in order to survive, to keep on living. 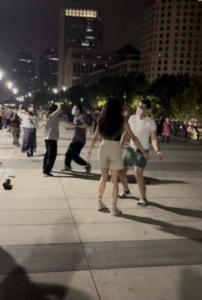 Shouldn’t June be a time for asking questions? If the city was never locked down, then what were these last two months? Who’s responsible for losing them? Who shut the hospitals, leaving innocent people to die in their doorways? Who sealed people into compounds and let them go hungry? Who threw away the food donations that the rest of the country sent to help us, and let them rot in the trash? Who took spoiled food and sold it to officials to use as government aid? Who closed the streets, cutting us off from our loved ones, some of whom we’d never see again? Who left people fleeing and stranded, trudging for miles, and sleeping in the open at train stations?

Such lawlessness, imbecility, corruption … we should just forget it?

Shouldn’t June be a time for healing? There were so many people who lost work in the lockdown, so many without access to food or clothing, so many businesses fallen into trouble, so many efforts gone to waste, so many things that had been advancing and growing, all crumbled to dust during this thing we can’t even call a lockdown.

And now we’re just supposed to forget it all?

Forgive me for not being able to put on a happy face right now. Perhaps my heaviness is untimely. After suffering, talk of happiness is laden with guilt. But if that suffering was itself manufactured, then forgetting is shameful.

Having the courage to question, the capacity to remember, and the tenacity to challenge—perhaps these are the mementos we should hold fast to in June. However, I am painfully aware of how very powerless these mementos are, and how very high the risk of them being censored is.

This April and this May will live forever in my memory. They serve as a memorial to my personal tragedy, as well as a reminder of the unresolvable traumas of this land.

It seems that our nation is extremely good at forgetting. After every calamity, we can always find a way to get back to survival, to life, even to happiness.

And so the cycle continues, as with the ancient capitals—Chang’an, Luoyang, Bianzhou, Hangzhou, and Jinling. Repeatedly, they rose from the ruins; repeatedly, warfare and iniquity drove them back into ruin, in accordance with destiny.

Heaven is silent, and people reap what they sow.

If we go back to discussing life so casually, if we so hastily choose to forget, we may find, in the not-so-distant future, that another unforeseen catastrophe awaits us. [Chinese]