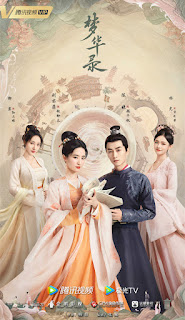 (China org) A historical romance series loosely adapted from a well-known drama of China’s Yuan Dynasty (1271-1368) on tea culture made its debut yesterday on Tencent Video.

“Meng Hua Lu,” also known as “A Dream of Splendor,” is directed by Yang Yang and written by Zhang Wei. The star-studded cast includes Liu Yifei, Liu Yan, Lin Yun, and Chen Xiao, who try their hands on the smaller screen this time. Tencent Penguin Pictures describes the 40-episode series as an inspirational romantic drama series for women.

The story is a loose adaptation of a Yuan drama by famous Chinese playwright Guan Hanqing, known as China’s Shakespeare. Yuan drama adaptations have been relatively rare in modern TV and online series.

Liu Yifei plays Zhao Pan’er, an owner of a tea shop in Hangzhou during the Song Dynasty (960-1279). Her co-star Chen Xiao plays Gu Qianfan, an imperial investigator. The two first met when hunting for a lost treasure painting and later developed a romantic relationship. Zhao had two close female friends, Sun Sanniang and Song Yinzhang, played by Liu Yan and Lin Yun. The gang of sisters worked together through difficulties and various tribulations to live independently and established a restaurant in Kaifeng, the then capital of Northern Song Dynasty (960-1127).

Although set in ancient China, scriptwriter Zhang Wei said the drama still very fits the modern spirit for women and female awareness. She also wanted to convey the concept of women’s friendship, support, and appreciation for one another during hardships and how they can work together for a common goal. “The power of such friendship is even more significant than romance,” she said.

“A Dream of Splendor” will also showcase Chinese tea culture through the character Zhao Pan’er. The director invited tea culture master Zhang Zhifeng to give the whole crew lessons. Zhang is a representative inheritor of the intangible cultural heritage of Chabaixi (literally, hundred tea show).

For this case, Tencent Video’s international version WeTV simultaneously broadcast “A Dream of Splendor” in various language subtitles for audiences of different countries and regions since June 2.