Portrayal of women in Tamil cinema should change: RJ Balaji on ‘Veetla Vishesham’

Actor-director RJ Balaji on the elements he added to the Bollywood hit ‘Badhaai Ho’, which he has re-written in Tamil as ‘Veetla Vishesham’

Actor-director RJ Balaji on the elements he added to the Bollywood hit ‘Badhaai Ho’, which he has re-written in Tamil as ‘Veetla Vishesham’

RJ Balaji has been frequenting Mumbai lately. Apart from his Tamil cricket commentary in the IPL, for which the RJ-turned-actor earned a legion of fans, Balaji has also been promoting his upcoming film,  Veetla Vishesham.

So, is the film a pan-India project, I ask in jest. “If this isn’t pan-India, what is? It is releasing in four screens in Mumbai and one screen in Noida,” laughs Balaji, as he settles down for a chat, at  The Hindu office premises in Chennai, to dicuss the Tamil remake of 2018 Hindi hit  Badhaai Ho. “When I think I have the maturity to do a big film, I will. It will eventually happen. For now, I have made a  pucca Tamil  padam.”

Excerpts from an interview:

What drew you to the  Baadhai Ho remake in Tamil?

When the film’s trailer released, I loved it, and called a producer, enquiring about its remake rights. He shot it down immediately, saying that it was too big a film for me. I was disappointed, and then I went on to do  LKG and then  Mookuthi Amman. After these two films, I wanted to make a film with something revolving around the family from  Mookuthi Amman. This idea appealed to me because it draws heavily from my own life — my mother was pregnant with my sister when I was in college. Around the same time, producer Boney Kapoor called to ask me if I am interested in the remake of  Baadhai Ho in Tamil, which surprised me greatly.

What elements did you add to ensure that it was rooted in Tamil cinema?

The Hindi original had relatively lesser-known cast, and so there was a freshness to it. We were clear that ours needed to be commercially viable and roped in actors like Urvashi and Sathyaraj. Though the original looks progressive from outside, there are some regressive thoughts in it. We felt that the lead character (played by Ayushmann Khurrana) was the weakest, and his profession had no link with the rest of the film. The character I play here is a biology teacher, and we want audiences to root for this boy. 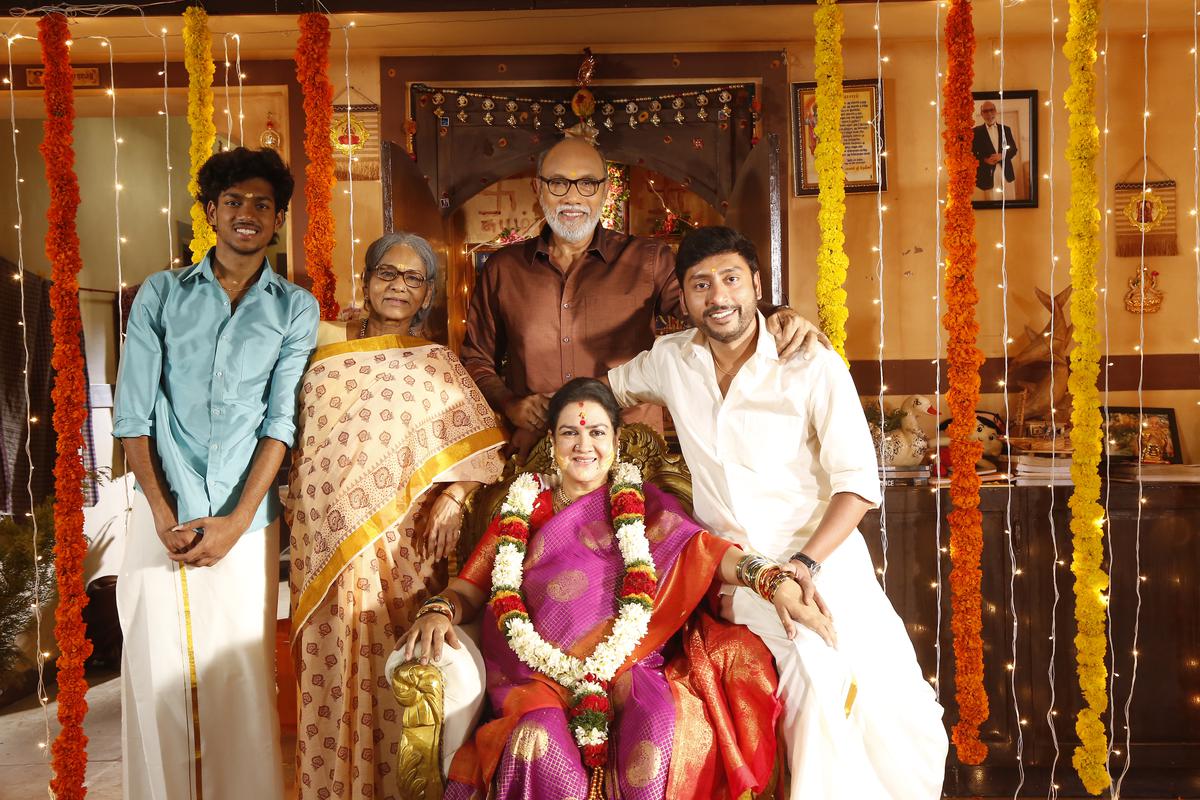 How was it working with the late Malayalam actor KPAC Lalitha?

It is a huge blessing to have had her in this film. Finding the right person for this particular character was difficult. We wanted a  paati who would be able to act, plus travel with us in the middle of the second COVID-19 wave. We initially met an actor from Kerala, who was physically unfit to play it. We travelled to Andhra to meet another actor, for whom travelling would have been a huge challenge. Finally, it dawned on us that we could consider KPAC Lalitha for this big role of the grandmother. On set, she often told us that this was her best performance. Looking at her scenes now, she comes across as a lioness and has put up an exemplary performance.

After being a successful RJ, you turned to acting in Tamil cinema, playing ‘the friend of the hero’ in several films, before you got your own projects. How do you look back at that phase?

It was forgettable. I was never happy or comfortable doing that. When I put on my earphones in the radio station, I felt like a king. When I compered in front of a packed audience, I felt a high. But, cinema, and those ‘friend of the hero’ roles, made me feel small. Also, the ‘sir’ culture in cinema put me off. I subsequently wrote a stand-up show that gave me confidence to write, and went I on to do three films.

So, are you saying you were under-utilised as an actor?

As an RJ, my voice was the biggest strength. So, filmmakers thought that the only way to utilise me was to make me say random things on screen. In fact, during my first day as an actor, I told director Sundar C, ‘All this is too different for me. I don’t think I can act. Shall I leave the sets?’, to which he said, ‘Nobody wants RJ Balaji to act. They want him to speak.’

How have you improved since then?

I have always felt that I was a loud actor till now. In  Veetla Vishesham, I had to play it subtle as a school teacher. Thanks to the star cast, I got the space to be true to my character.

You are busy with films, cricket commentary and podcasts. How do you multi-task?

That’s because I follow a certain discipline. Al the things that I take up are what I really enjoy. What are some of the things you wish to see change in Tamil cinema?

Portrayal of women and how love is showcased. During a flight from Japan to Chennai, I was watching a random Telugu film, in which the hero was chasing a girl. The airhostess, who was passing by, asked me about it and said, ‘No, this is not right.’ I was shocked because she has never witnessed something like this, but we audiences have been repeatedly told that this is love.

In my films, I wish to write strong women characters and make sure men treat women well. I’m also against glorifying violence. In the Nineties, Rajinikanth did so many common man roles, like playing a coolie or a milkman. These days, heroes don’t have any jobs. They are either rowdies, gangsters or cops.

What are your future projects?

I’ve completed a thriller, which I consider my biggest experiment till date. It’s a whodunit by a Malayalam film director, and I was amazed that I could pull off an entire film that has just two pages of dialogue. Apart from this, I have two films, one of which I am writing. By mid next year, I will get back to direction.

Mika Singh wants her 'Vohti' to be like THIS Bollywood actress!

Supreme Court no to extra round of counselling for PG med seats, Health News, ET HealthWorld