On Flee and other paragons of adult animation-Entertainment News , Firstpost 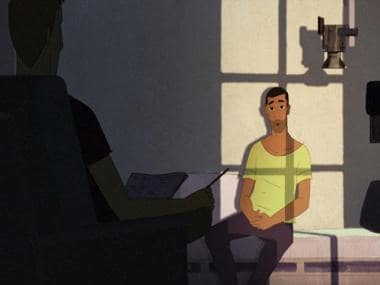 The Danish animated documentary Flee is yet another reminder of the fact that animation for adults has entered its renaissance phase, and builds upon the precedent established by some of the greats of the medium.

One of the first questions posed before Amin, the subject of Jonas Poher Rasmussen’s animated documentary Flee (streaming on Zee5 in India), is: “What does home mean to you?” Amin’s answer is simple and poignant: “Home is where you’re safe”. Flee is an immensely powerful refugee story from Afghanistan — Amin, a young gay man, escapes a regime that’s not only out to get him because of his sexuality, but also persecutes his family.

Rasmussen went to school in Denmark with Amin (their first encounter on the school bus is memorable and the two share a laugh about it early on in the film), and the early parts of the documentary establish that connection between them — from that point onwards, the film is a beguiling mixture of memories, real-time interviews and more impressionistic segues about politics, sexuality and family dynamics.

That large chunks of this documentary are basically unclassifiable is a testament to its originality and impact. I can think of no other film in recent times that embraces hybridity this way and deploys it in such a devastatingly effective manner. In the English-language dubbed version, Hollywood stars Riz Ahmed and Nikolaj Coster-Waldau serve as narrators (they’re also executive producers on this version).

Among other things, Flee is an excellent advertisement for the animated medium. Animation is not merely a way to get kids to eat their morning cereal — it never was. And today, it’s the medium of choice for artists looking to tell unique stories in a suitably distinctive manner — this could be anything from a time-travel caper involving an omnipotent mad scientist (Rick and Morty), a wordless story about memory homecoming (The Arrival) or a gritty, cautionary war story set in Israel (Waltz With Bashir).

The 1960s and 70s were a very interesting time for American artists, especially comicbook artists and animators. On the one hand, comic book sales were booming in the postwar years and their cultural influence was more visible than ever before. But all this commercial success also meant that a section of artists were soon bored of the templatized nature of this endeavor—artistically speaking, they wanted to break free and create stories that did not involve superpowers and was not primarily aimed at a young readership. The underground ‘comix’ movement started around the same time, in the late 1960s, with artists like Robert Crumb, Trina Robbins and Joel Beck at the forefront.

Out of this cultural landscape came Ralph Bakshi, an animator and filmmaker of astonishing originality. Bakshi’s debut work was based on a strip that had been published in some of the aforementioned ‘comix’ magazines of the 1960s — Fritz the Cat. Set in an anthropomorphized version of New York, the comic strip and the film featured the titular cat, an amoral, womanizing, deceptive anti-hero whose adventures tended to be quite explicit (and not just sexually, there was a fair bit of scatological humour as well). Through the course of the movie, Fritz becomes a college dropout, hangs out with inner-city ‘crows’ (African-Americans were anthropomorphized as crows; they were also show smoking marijuana onscreen, which was a big deal in the 60s and 70s) and in a farcical turn of events, ends up becoming a left-wing revolutionary.

The story was a critique both of the existing political order in America at the time—as well as the political forces in opposition, like the counterculture movement and expressions of free love. But it’s really Bakshi’s quicksilver style and his outrageous, profane protagonist who made the film the cultural milestone that it is.

Creator after creator in the animation industry has spoken about the influence of Fritz the Cat on their careers — this includes the makers of The Simpsons and South Park.

The most successful example of animation for adults is, of course, the iconic TV series The Simpsons, created by animator Matt Groening (famously, the initials MG are hidden in Homer Simpson’s face, near the years).

It’s difficult to overstate the outsized influenced The Simpsons has had on pop culture. Homer’s signature “D’oh!” exclamation is just one of the dozens of words the show has contributed to the dictionary. Others include ‘cromulent’ and ‘embiggen’ (which was also adopted by Kamala Khan aka Ms Marvel as her own signature war-cry; she says this while using her powers to expand her fists).

But beyond the neologisms, the expertly produced farce and the overall attentiveness to the zeitgeist that The Simpsons displayed, throughout the 90s the show worked as a simple, sweet family story in an era of change at a dizzying pace.

Recent seasons have not been as good, and yes, the racist portrayal of a secondary Indian character, Apu, has been acknowledged and corrected by the show’s leading lights, including actor Hank Azaria who voiced both Homer and Apu.

In the 21st century, Groening also delivered Futurama, a whip-smart parody of space operas (most notably, Star Trek) which at its peak was an even better show than The Simpsons. This was also the time when Trey Parker and Matt Stone’s South Park rose to prominence Started in 1997, South Park became one of the most popular shows of the early 2000s—its signature irreverence and its parody of political correctness, bureaucratic doublespeak and just general human idiocy, struck a chord with audiences across the world. Like The Simpsons, South Park is also still very much around but only as a pale shadow of those early seasons. Parker and Stone do have a new contract with Netflix, though, and it’ll be interesting to see what new directions they might take in the streaming era.

Rick and Morty and the Adult Swim era

In 2001, Adult Swim began operations by night—which is to say, after Cartoon Network’s target audience was fast asleep, the network would pull a switcheroo and become ‘Adult Swim’, which aired animated content targeted at adults. One of the starting points for the network was to air popular and acclaimed anime films and shows from the 90s, like Ghost in the Shell or Neon Genesis Evangelion or Cowboy Bebop (the first-ever anime telecast on the channel). These titles would be dubbed for an American adult audience and aired late at night on Adult Swim.

So as to avoid shocking parents, especially those who felt safe tuning into Cartoon Network for their kids’ benefit, Adult Swim also added the following disclaimer ahead of its programming: “Parents strongly cautioned—the following programs are intended for mature audiences over the age of 18. These programs may contain some material that many parents would not find suitable for children and may include intense violence, sexual situations, coarse language and suggestive dialog.”

Through the late 2000s, Adult Swim had a big hand in developing or restoring the popularity of animated shows like Family Guy and Futurama.

In December 2013, Dan Harmon and Justin Roiland’s animated series Rick and Morty aired its first episode on Adult Swim. Harmon was one of the most beloved showrunners in TV at that time, having created the brilliant comedy Community. Roiland, a talented animator and voice actor himself, came up with the idea of creating a parody of Back to the Future, which later developed into the core concept behind Rick and Morty—a Doctor Who-like omnipotent character, a mad scientist who travels across galaxies with his adolescent grandson, a timid fellow who comes into his own over time.

Over the last 4-5 years, Rick and Morty has gone from strength to strength to become perhaps the most acclaimed animated series of them all, alongside Netflix’s BoJack Horseman. Its success has inspired so many other animated comedies for adults, across traditional TV and streaming networks. Harmon and Roiland now have a new contract for 70 fresh episodes of Rick and Morty over an unspecified number of seasons; the fifth and latest season aired in 2021.

Flee and its inimitable style

Flee has several moments strewn throughout its 80-minute runtime that are intensely suspenseful and keep the viewer on the edge of their seat. There are several moments of innocence and frivolity as well—like a scene where Amin’s mother is playing with Bollywood trading cards on her terrace (“You have two Anil Kapoors, give me one in exchange for Vivek Mushran and Mamik Singh”). The style of animation it deploys—rotoscopic animation—has previously been used very well in movies like the Philip K Dick adaptation Through a Scanner Darkly, starring Keanu Reeves.

But it’s actually a moment of simple, unbridled joy that will stay with me, I think: it’s the moment when we see Amin stepping into a gay club for the first time in his life. Amin, who had known nothing but scorn, discrimination and persecution for his sexuality; experiences acceptance and compassion for the first time. It’s a beautiful moment, beautifully brought onto the screen and it’s a potent reminder of the power of the animated medium.

Aditya Mani Jha is a Delhi-based independent writer and journalist, currently working on a book of essays on Indian comics and graphic novels.

Med Dr: NMC proposes use of 'Med Dr' as prefix for practitioners of modern medicine