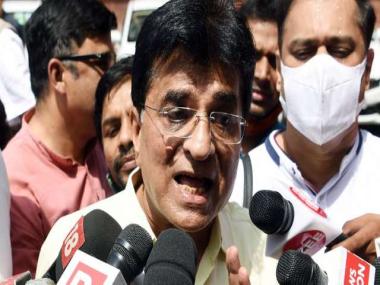 BJP leader Kirit Somaiya has filed a complaint with Election Commission of India, requesting to initiate an investigation & cancel the election of Shiv Sena leader Sanjay Raut due to “corrupt practices adopted by him in the recently held Rajya Sabha 2022 Maharashtra elections.”

Somaiya wrote in his letter to EC that Raut indulged in corrupt practices to get votes and threaten the voters involved in non-transparent manipulative activities to win the election.

His letter further said that Raut went on record to say which MLAs did not vote for him or the other Sena candidate, Sanjay Pawar in the RS elections in Maharashtra on 10 June, and ‘threatened’ them.

As per Times Now, the BJP leader also asked how Raut could identify those 6 MLAs who did not vote for Shiv Sena in the RS elections.

Somaiya added that the way Sanjay Raut expressed gratitude to the small parties and independent MLAs who voted for Shiv Sena is a clear indication that he had an understanding with them prior to the RS election.

He further said, “He was so confident while making such statements that more than a dozen MLAs who are not linked with major political parties have voted for Shiv Sena.”

The BJP won three out of six seats in Maharashtra RS elections on June 10 while the ruling Congress-NCP-Shiv Sena alliance won the other three. Piyush Goyal, Anil Bonde, and Dhananjay Mahadik won from the BJP while Sanjay Raut of the Shiv Sena, Praful Patel of the NCP, and Imran Pratapgarhi of the Congress won as well from the MVA alliance. Shiv Sena’s Sanjay Pawar, however, lost against BJP’s Dhananjay Mahadik in the contest for the sixth seat.