‘The strength of India’s democracy lies in the fact that a young tea seller is addressing the UN for the fourth time’, was a showstopper at the 76th UNGA 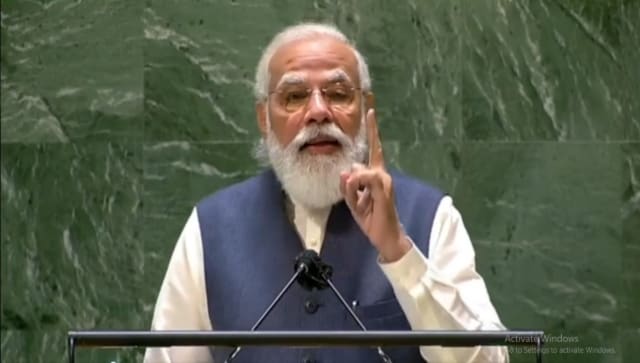 Prime Minister Narendra Modi’s speech at the 76th United Nations General Assembly (UNGA) was short, crisp, to the point and a prime instance of brilliant wordplay to wow the world at a global forum.

Hundreds of nation heads are in New York City this week at the UN headquarters to attend annual General Assembly. The high-level General Debate starts on 21 September ends on 27 September. Although the event was held almost entirely virtually last year because of the pandemic, many leaders are delivering in-person speeches at this year’s summit, including US president Joe Biden, who made his first address to the 193-member world body since he took office.

, climate change and the Taliban’s takeover of Afghanistan are some of the topics highlighted at this year’s meeting.

Here are some catchy quotes from Prime Minister Modi’s speech:

1. “I represent a nation that is called the Mother of Democracy and this year India completed 75 years of independence. Our identity is our strong democracy.”

2. “The strength of India’s democracy lies in the fact that a young tea seller is addressing the UN for the fourth time.”

3. “India is one-sixth of the world, therefore, when India grows, the world grows. When India reforms, the world transforms.”

4. “We are providing vaccines to millions across the world. I invite all vaccine manufacturers to come and make vaccines in India.”

5. “India is a trustworthy democratic partner for the global economy.Through various transformational development programmes, India is contributing to global development and ensuring that ‘no one is left behind’.”

6. “Regressive thinking and extremism are becoming a threat to the world. There are countries that are using terror as a political tool. They should know that terror is equally dangerous for them.”

7. “Our seas are our legacy and shared heritage. We cannot let our oceans be misused and abused.”

8. “The time to act is now, UN has to keep itself relevant and has to improve its reliability.”

9. “India is ensuring a balance between economy and ecology and the world can take pride in India’s efforts to combat climate change.”

10. “We must fulfil our duty to help Afghanistan’s people in need.”

Farm agitation violent in nature, need to expose ‘anarchists’ behind it: BJP

Freed From Guantánamo, but Still in Limbo 15 Years Later

Now Instagram users can schedule IG Live: Here’s how to do it | Technology News