GLASGOW, SCOTLAND – Negotiations are continuing Saturday at the COP26 climate summit in Scotland after delegates failed to agree on a final statement before the original deadline of 6 p.m. Friday. The text of a deal must be agreed upon and signed by all parties to the conference.

A third draft agreement was released Saturday morning following talks that went late into the night before.

‘We have come a long way over the past two weeks and now we need that final injection of can-do spirit present at this COP, so we can get this shared endeavor over the line,’ COP26 President Alok Sharma told delegates Saturday morning in Glasgow.

A scheduled stock-taking plenary session ran well behind schedule Saturday afternoon amid continuing disagreements, and it’s possible the summit could extend into Sunday.

Delegations from 197 countries are trying to agree on a deal to combat climate change and keep global warming to 1.5 degrees Celsius above pre-industrial levels, the target agreed to in Paris in 2015 and seen as crucial to avoiding the worst effects of climate change.

A speech from the Tuvalu delegate received lengthy applause Friday as he warned that climate change posed an existential threat to the Pacific island and that optimism was fading among vulnerable states for an ambitious climate deal.

Several developing nations called for more detail on the operation of carbon markets and a stronger commitment on climate finance for poorer states.

Simon Stiell, the environment minister for Grenada, a vulnerable low-lying island in the Caribbean, said there were still key differences as the delegations argued over individual words and phrases in the text.

‘The challenge now is for those of us who are progressive to hold the line … We owe our children, our grandchildren, this is critical now.”

The latest draft of the final text, known as the cover decision, modified the language around key commitments in several areas.

Signatories to the deal have pledged to come back every year with improved plans on cutting greenhouse gas emissions. However, the third draft adds to that commitment the phrase “taking into account different national circumstances,” suggesting there may be some room for maneuvering.

The third draft also weakens the language on commitments from richer countries to increase so-called climate finance payments to poorer nations, to help them adapt to and mitigate climate change. The previous draft committed richer signatories to double the financial support but the latest draft only urges them to do so.

Helen Mountford of the World Resources Institute said key areas of the agreement have so far survived the negotiation process – despite strong objections from some delegations.

“Developing countries also are demanding that richer nations should help pay for the loss and damage they suffer through climate change, since rich countries are responsible for most historical greenhouse gas emissions. Several developed countries, including the United States, have raised objections.

“The one big issue that’s really concerning most negotiators now is ensuring we take action on loss and damage. It’s sufficiently set up in the text to really move forward on this agenda item,” Mountford said. 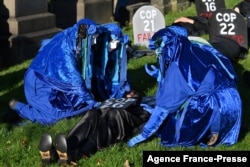 Performers from the Blue Rebels conduct a mock funeral ceremony at the ‘Glasgow Necropolis’ to symbolize what they see as the failure of the COP26 process, in Glasgow, Scotland, Britain, Nov. 13, 2021.

Language around the phasing out of fossil fuels has also been weakened under pressure from some delegations.

That would effectively allow producers and consumers to continue using coal if carbon capture technology is employed to offset emissions.

‘Right now, the fingerprints of fossil fuel interests are still on the text and this is not the breakthrough deal that people hoped for in Glasgow,” Morgan said in a statement. “The key line on phasing out coal and fossil fuel subsidies has been critically weakened, but it’s still there and needs to be strengthened again before this summit closes.”

The new draft also strengthens language around climate finance – the amount that rich countries will pay poorer nations to adapt to climate change and decarbonize their economies. Richer nations are responsible for most greenhouse gas emissions, but climate change tends to have a bigger impact on developing countries.

The issue of climate finance will be crucial in securing a final agreement, said Cassie Flynn, the United Nations Development Program’s strategic adviser on climate change.

“We knew going into this that there was this outstanding promise of $100 billion that was meant to go from developed countries to developing countries to be able to help them tackle this climate crisis that is at their doorsteps. And it was supposed to happen by 2020 – and the year came and went. So now in 2021, a lot of [developing] countries are looking at the countries that made this promise and saying, you have to fulfill it or else we’re in real jeopardy of not fulfilling the goals of the Paris Agreement,” Flynn told VOA.

She added that the joint declaration this week by the United States and China to work together to cut emissions and try to keep global warming below 1.5 degrees Celsius had given added momentum to COP26 negotiations.

“To have the two biggest emitters in the world come together and say, we are in it, we are going to work together, and we have big plans, I think set a really good signal to the rest of the world.”

However, U.N. Secretary-General Antonio Guterres warned Friday the COP26 summit was in danger of failing as it entered its final hours.

He said that governments must improve their plans to reduce emissions, known as “nationally determined contributions.”

Some information for this report came from The Associated Press.

To Counter China, Austin Vows to Shore Up Alliances With Others in Region