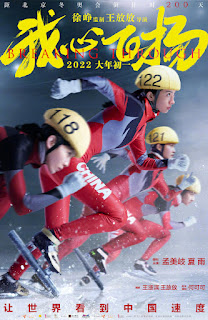 (china org) Though the 2020 Tokyo Summer Olympics have just ended, there are plenty of Chinese sports films on the horizon promising to keep the athletic spirit alive. One of the most anticipated productions is “Breaking Through,” based on China’s national speed-skating team at the 2002 Winter Olympics.

Directed by Wang Fangfang and produced by heavyweight actor and director Xu Zheng, “Breaking Through,” starring Meng Meiqi and Xia Yu, tells the story of how China clinched its first Winter Olympics gold at the 2002 Games, held in Salt Lake City, Utah.

Inspired by true events, the film follows speed-skater Yang Yang, whose performance in the women’s 500 meters short-track race made her the first Chinese athlete to win a gold medal at a Winter Games. It was a bellwether year for the country, which went on to achieve its historical best, bringing home two golds, two silvers and four bronzes.

In preparation for her role, Meng, a renowned pop idol, spent months training as a speed-skater and had to film in some of the coldest climes of northeast China. According to co-star Xia, who plays the national team’s coach, Meng pushed herself very hard in acting and went so far as to put a rock inside one of her ice skates in order to feel the real pain, causing her foot to bleed, as she was determined to embody all the sacrifice of her character.

“Breaking Through” also benefitted from a group of speed skating professionals and coaches who participated in the production, which wrapped up in May.

The film’s release date is set for Feb. 1, 2022, which is both the Chinese Lunar New Year – generally the start of the most profitable movie season of the year – and mere days away from the Feb. 4 opening of the 2022 Beijing Winter Olympics.

Besides “Breaking Through,” there are a number of other sports films in the pipeline. Some of the high-profile projects include “Ping-Pong of China,” set to start production early next year, and Song Haolin’s synchronized swimming picture “Water Boys,” which was scheduled for an Aug. 13 release but has since been delayed over COVID-19 concerns. Jimmy Wan Chi-Man’s “Zero to Hero,” a biopic about So Wa Wai, Hong Kong’s first Paralympic athlete to win gold, recently announced its Chinese mainland release, Sept. 4.

For years, sports films have been a popular genre in Chinese filmmaking, evidenced by Peter Chan’s highly-acclaimed “Leap,” a multi-generational story about the struggles of the Chinese women’s national volleyball team from 1981 to 2016, which went on to gross 836 million yuan.