New Delhi: Popular TV actress Rubina Dilaik called out a fan page for editing her throwback picture from a beauty pageant and posting it on social media. The ‘Bigg Boss 14’ winner shared a post on Instagram story, slamming the person, who edited the photo and circulated it. Internet is filled with several morphed and edited pictures and videos of celebrities. While many celebs refrained for talking about such photos, Rubina expressed her displeasure over the same

The Pahadi beauty took a sly dig at the fan, who edited the photo. She wrote, “I want to meet the genius who edited the ‘left’ picture. And ask how badly beaten up was he/she with life.” 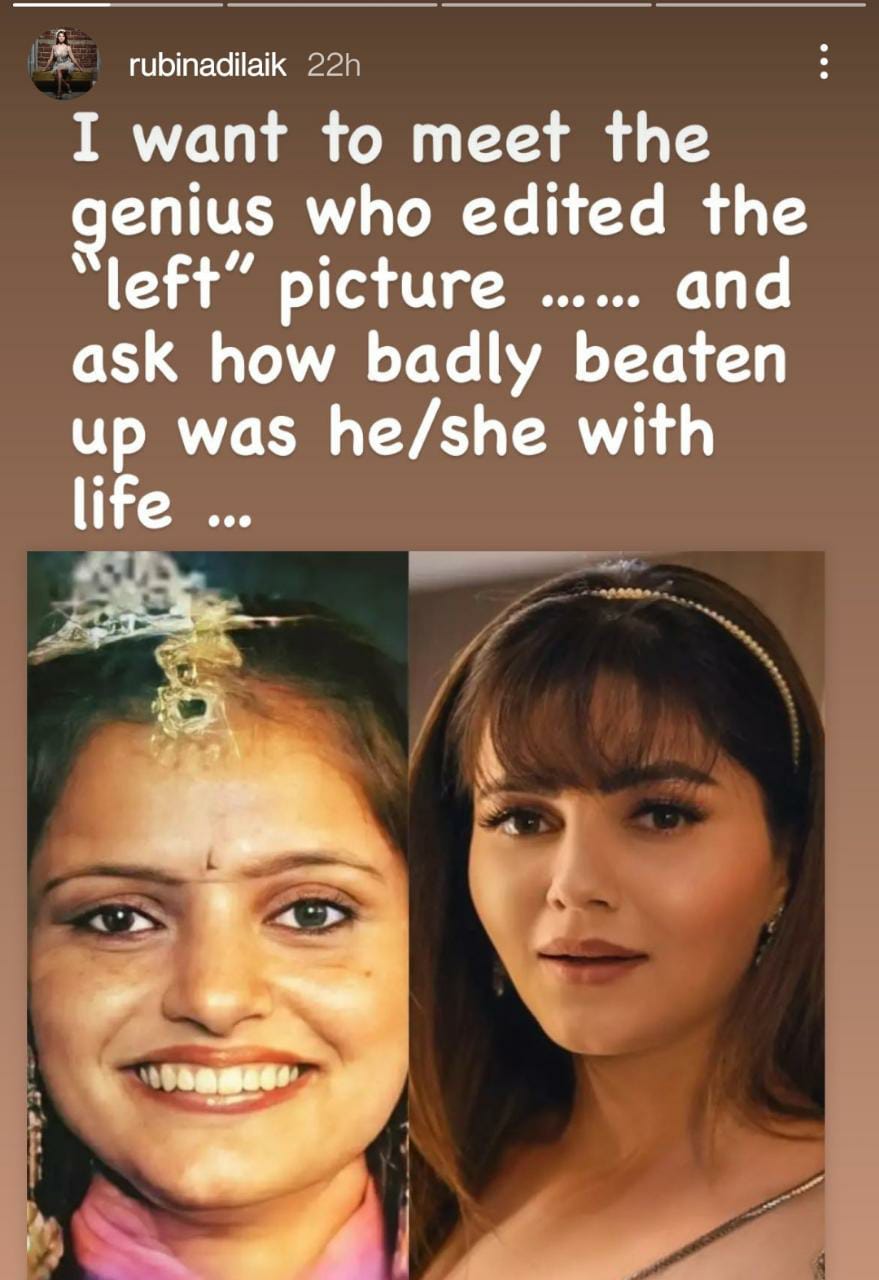 Rubina Dilaik grabbed several eyeballs for taking a stand on different issues during her stint in Salman Khan’s ‘Bigg Boss 14’. Her fights with Rahul Vaidya and Kavita Kaushik became the talk of the town. Despite receiving criticism from other contestants, she never stopped expressing her opinion in ‘BB 14’ house. Her confidence and strong personality were instrumental in her victory.

Last month, Rubina penned a long post to slam the netizens, who trolled her for gaining weight after recovering from COVID-19. Several small screen stars applauded her taking a stand against fat-shaming and not letting negativity affect her.

Also READ- Rubina Dilaik Has A Strong Message For ‘Pseudo Fans’: ‘Disappointed That My Physical Appearance Is Important Than My Talent’

On the professional front, Rubina was last seen as Saumya in ‘Shakti-Astitva Ke Ehsaas Ki. She returned to the show after winning ‘Bigg Boss 14’ earlier this year. The actress received critical acclaim for playing the role of an intersex girl in the social drama, which also starred Vivian Dsena.

The small screen diva will make her Bollywood debut with ‘Ardh’, which has been directed by Palash Muchhal. If gossip mills are to be believed, she is in contention to play the lead role in ‘Naagin 6’. Neither Rubina nor Ekta Kapoor has confirmed the rumours floating on the internet.

Watch this space for more updates!

India’s abstentions on Ukraine at UN not seen as neutrality: Linda Thomas

Marvel Studios’ ‘Armor Wars’ now being developed as a movie

India must check political polarisation to meet the China challenge