As Omicron surge, officials alert that caution and COVID protocol is the ‘only’ option, Health News, ET HealthWorld 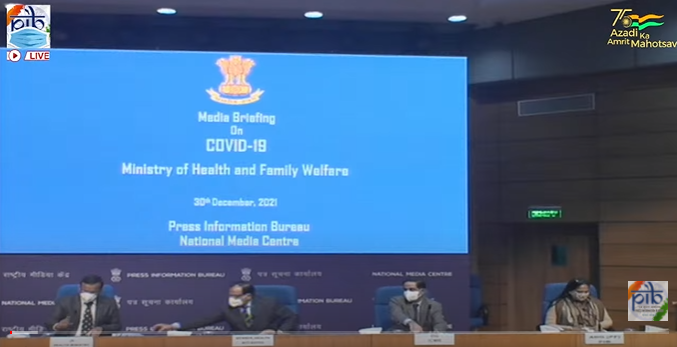 New Delhi: In view of the rapid rise witnessed in COVID cases detected in the country, the same preventive strategy following all restrictive measures should be put in place by the state governments that can only help in preventing the spread of all COVID variants, top Union Health Ministry officials, informed Thursday.

Lav Agarwal, Joint Secretary, Union Health Ministry highlighted that the COVID numbers are surging across the nation with the average daily cases for the past one week rising to 8,009. The active cases now stand at 82,402 with Kerala ( 25.66%) and Maharashtra (21.33%) contributing the maximum number of active cases.

Speaking about the surge in cases witnessed in the country, Dr VK Paul, Health Official, Niti Aayog said, “There is an uptick in the number of COVID cases as can be seen by the number of cases recorded in the last 24 hours. Delhi, Maharashtra or Mumbai in particular, Punjab, Haryana, Jharkhand, Chhattisgarh among many states are showing a rise in cases and an upward trend. We believe on the scientific basis that the reproductive number is 1.22, so the cases are now enlarging. So far, the deaths are stable, lying below 300 on most days which is reassuring as of now. What we are witnessing can be a part of global surge in cases, pushed by the Omicron in the world.”

In the guidelines issued earlier by the health ministry, the states were asked to impose containment measures after monitoring the local situation, with the threshold set at more than 10 per cent test positivity or 40 percent O2 supported/ICU beds occupancy. Till now eight districts have crossed the threshold mark of 10 percent weekly positivity; six of them are situated in the state of Mizoram, one in Arunachal Pradesh and one is present in West Bengal.

Rising concerns over the spread of Omicron
There has been a global surge witnessed in the number of COVID cases, with four countries- US, UK, France and Spain contributing 58 percent of the total cases recorded last week. Many countries have highlighted Omicron as the dominant variant causing the rapid surge in recorded COVID cases.

Total cases of Omicron around the globe has reached 3,30,379 with 59 confirmed deaths from the new variant. The United Kingdom has reported the highest number of Omicron cases followed by Denmark and the United States.

The World Health Organization(WHO) in its bulletin highlighted that the early data from the United Kingdom, South Africa and Denmark suggests there is a reduced risk of hospitalization for the Omicron compared to the Delta variant. However, further data is required to understand the clinical markers of severity including the use of oxygen, mechanical ventilation and death, and how severity may be impacted by vaccination and/or prior SARS-CoV-2 infection.

Omicron in India
Sharing the country’s data on Omicron variant, Agarwal informed that India has reported 961 cases of the variant till now in 22 states and UTs. He mentioned that the central strategy of testing, tracking and isolating them in hospitals is being undertaken to prevent the spread of the highly transmissible Omicron variant.

Speaking on the contribution of Omicron cases to India’s total case tally, he said, “The dominant strain in India remains Delta. However the countries which are currently witnessing a rapid rise in cases have detected a rising number of Omicron infections through Genomic Sequencing. Likewise, WHO also mentioned in its bulletin that the Delta variant is being replaced by Omicron. The precautionary tools remain the same for all the COVID variants, thus making it essential for all of us to take individual responsibility of following Covid-Appropriate Behaviour to prevent the spread of COVID infection.”

Vaccination coverage in India
Over 90 per cent of the population (84.16 Crore) has received the first dose of COVID vaccination while 63.5 per cent (59.67 Crore) have been fully vaccinated. The government will also be initiating the vaccination of children in the age-group of 15 to 18 years from January 3 and precaution doses for priority groups from January 10.

Speaking on the vaccine that will be given as the third dose, Dr Balram Bhargava, Director General, Indian Council of Medical Research (ICMR) said, “Deliberations are going on between scientific groups. We are analyzing the population that will require the vaccine, what vaccines are available including the new vaccine, which vaccine can be given with which vaccine in terms of safety and efficacy. We are analyzing all the data which is available, and we will have clear cut recommendations on the same before the 10th of January.”

Taking Precautions remains the ‘only ‘ option
Highlighting that the defensive mechanism remains the same against all variants, Dr VK Paul, Health Official, Niti Aayog said, “No need to panic. As a nation we are prepared, we have experience and we have the massive shield of very high coverage of the vaccine. But there is a need to be prepared, responsible and to be disciplined. We must follow the rules and restrictions enforced by the state governments in the larger interest. Mask remains the final protection blocking the entry points in addition to the internal protection provided by vaccines.”

Health experts highlighted that although the variant has changed, the preventive measures and treatment remains the same. Annotated that it is the collective responsibility of all the citizens to follow Covid-Appropriate Behaviour and stick to the restrictive measures issued by the Union and State governments at all times.