Women’s U-19 WC: India Storm Into Super Six With 83-Run Win Over Scotland 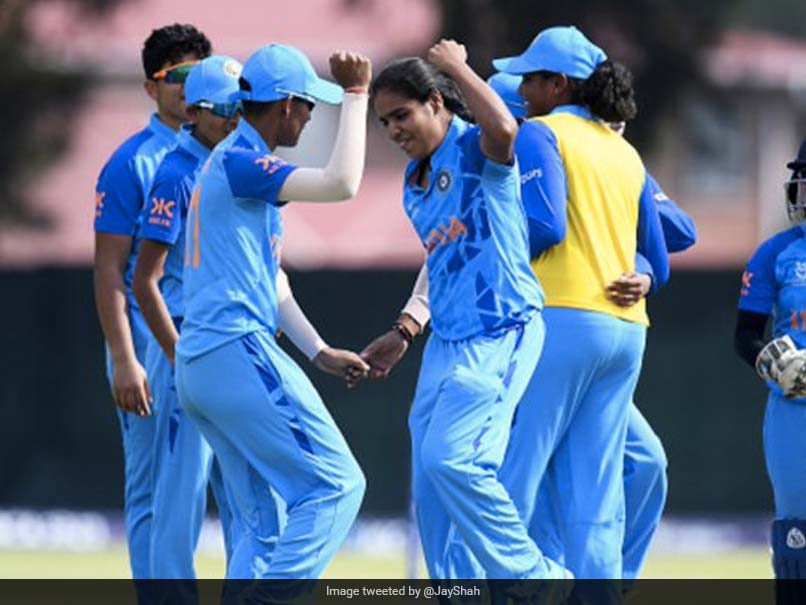 Spin trio of Mannat Kashyap, Archana Devi and Sonam Yadav produced sensational bowling display as India thrashed Scotland by 83 runs to storm into the Super Six of the inaugural Women’s U-19 T20 World Cup in Benoni on Wednesday. Opting to bat, India lost their star opener and skipper Shafali Verma (1) in the second over. It was Gongadi Trisha’s valiant 57 off 51 deliveries and Shweta Sehrawat’s counter-attacking cameo of 31 not out off 10 balls that propelled India to 149 for 4.

In reply, left-arm spinner Mannat led the show with a fine spell of 4-0-12-4, while off-spinner Archana Devi claimed 3/14 from her four overs as India shot out Scotland for 66 in 13.1 overs to make it a hat-trick of wins and seal their Super Six berth.

Fifteen-year-old Sonam, who also bowls left-arm spin, bagged 2/1 from 1.1 overs to complete the domination as India finished on top of Group D with six points from three matches. India had earlier defeated South Africa and UAE.

It was not an ideal start for India, a couple of days after they had posted a massive 219 for 3 against UAE, riding on Shafali’s 34-ball 78 as they lost two wickets inside the powerplay.

Shafali was trying to attack Nayma Shaikh over midwicket, only to be caught in the deep by the Scottish skipper Katherine Fraser.

Sonia Mendhiya was the second wicket to fall in the powerplay, becoming the victim of Orla Montgomery.

Richa Ghosh (33) then steadied the ship with Trisha in a crucial 70-run partnership in the middle overs.

Fraser (2/31) inflicted a double blow, dismissing Richa and Trisha in a span of three balls to leave India in a spot of bother at 105 for 4 in 16.5 overs.

Shweta then took on the attack on the Scottish camp with four boundaries and two sixes to give India a perfect finish.

Chasing, Darcey Carter (24) and Ailsa Lister (14) gave Scotland a fiery start, taking them to 40 for 1 in five overs but Mannat foxed the Scottish batters with her clever variations to derail their chase.

Mannat and Archana formed a deadly partnership in the middle overs and in no time reduced Scotland to 50 for 5 inside 10 overs.

From thereon, it was just a matter of time as none of the remaining batters managed double digit scores.