Yadav said the BJP is necessary for the country’s development and with its farsightedness, it has brought positive changes 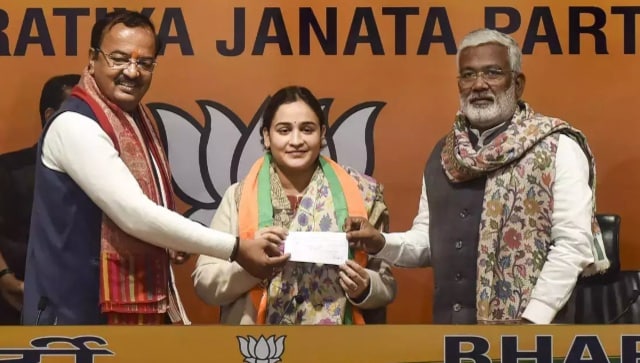 Bharatiya Janata Party leader Aparna Yadav on Sunday said she went to meet Samajwadi Party patriarch Mulayam Singh Yadav after joining the BJP to seek his blessing as she will always remain the daughter-in-law of that family, PTI reported.

“I will thank him (Mulayam Singh Yadav), for giving me a lot of political knowledge. I am the daughter-in-law of that family and will remain the daughter-in-law. It is my duty to take the blessings of elders before doing any good work,” said Aparna Yadav.

Later during a door-to-door campaign in Lucknow, she appealed to people to vote for the BJP.

As per PTI’s report, Yadav said the BJP is necessary for the country’s development and with its farsightedness, it has brought positive changes. She also said that for the safety of women, it is necessary that a BJP government is formed in Uttar Pradesh.

“As part of this door-to-door campaign, I appeal to people to vote for BJP. Mothers, sisters all feel safe in BJP govt and I want to appeal to people ‘Ek bar Phirse BJP Sarkar Baniye, 2022 Mein Kesariya Lehraiye’,” she said.

“I am very thankful to BJP. The nation always comes first for me. I admire PM Modi’s work. I have also been influenced by BJP’s works and schemes including the Swachh Bharat mission, the welfare of women, employment. I will work in my fullest capacity,” she said while joining the party.

Yadav’s joining the saffron party comes ahead of next month’s polls to the 403-member state assembly.

According to a report by PTI, in a statement issued on Sunday by the BJP headquarters here, Yadav said, “I joined the BJP because of nationalism. In the BJP government, women have got respect.”

“The BJP is a party, which has saved the country. I want to move with Prime Minister Narendra Modi to build a new India. I want to get an opportunity to fill the colours in the new India with Yogi ji,” Yadav said.
For the development of India and Uttar Pradesh, the BJP is necessary, she said.

“If the BJP wins (the assembly polls), then both the country and the state will develop, there will be welfare of the poor people, the women will remain safe, and the mantra of ‘sabka saath, sabka vikaas, sabka vishvaas’ will be fulfilled,” Yadav said.

Singh, who has joined the BJP said that implementation of central schemes has benefitted women in Uttar Pradesh.

“The previous governments did not even think about welfare of women, implementing the schemes were a far-fetched idea,” she said.

Priyanka Maurya, who also left the Congress and recently joined the BJP, said, “I have joined the BJP in the interest of society and in national interest.”