In the last Assembly elections, the Congress got seven seats and 5 percent votes — and that too with the support of the Samajwadi Party. This time, it is fighting all alone 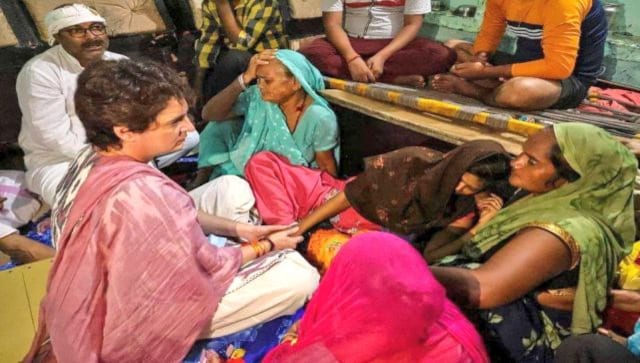 Congress leader Priyanka Gandhi Vadra meets the family of Arun Valmiki, who died while in the custody of Uttar Pradesh Police in Agra. Image Courtesy: @AjayLalluINC/Twitter

The Congress is betting big on its national general secretary, Priyanka Gandhi Vadra, for helping it sail through the 2022 Uttar Pradesh Assembly elections. In the last month and a half, she has tried to grab the attention of the voter with a flurry of populist announcements.

It all started with her pledge to reserve 40 percent seats for women in ticket distribution for UP elections; this comes to around 161 out of 403 seats in the state. This was followed by announcement of complete waiver of outstanding farm loans, if the Congress is voted to power in the state. Later, she announced freebies like smartphones and scooties for girls, and free treatment up to Rs 10 lakh for the citizens of the state. Similar populist announcements are expected from her in the near future.

The reaction of the general voters and most election analysts to these announcements is that of cynicism: “If the sky falls, we shall catch larks!” Since there is no probability of the Congress coming to power, there will be no question of fulfilling these promises! It is not that Priyanka is not aware of this fact. But, to revive the Congress in the politically-charged state, she has no option but to make such promises.

In early 2022, elections will be held in five states — Uttar Pradesh, Uttarakhand, Punjab, Manipur and Goa. If the Congress were serious about the needs of women, farmers and poor, then it would have made a similar declaration in the remaining states where they are electorally in a good position. Don’t the women, farmers and poor in those states need such “reforms”? In fact, in Punjab, the Congress is in power and in Uttarakhand, Manipur and Goa it is the principal Opposition party. Since the electoral arithmetic favours Congress in other states, it turns a blind eye to the needs of the people there. While the plight of Congress in UP is well known, the party has been contesting for fourth place for the last two to three decades, that’s why the big promises!

In the last Assembly elections, the Congress could hardly manage seven seats and 5 percent votes — and that too with the support of the Samajwadi Party. This time, the Samajwadi Party has dumped the Congress. Also, in the 2019 Lok Sabha elections, only Sonia Gandhi could get the party one seat in the state. Even the then Congress president, Rahul Gandhi, lost the election from Amethi, the traditional seat of the family. Despite such disappointing election results, Congressmen did not bother to re-establish grassroots organisation or galvanise public support in the last 4-5 years.

One can understand the plight of the party from the fact that Congress UP chief Ajay Kumar Lallu was in jail this year for allegedly providing fake documents of some buses. Priyanka had offered to use buses arranged by Rajasthan Congress to ferry migrant workers in Uttar Pradesh back to their native homes. Furthermore, plagued by the party’s inaction, insensitivity and indecisiveness, senior leaders like Jitin Prasada have left the Congress and joined the ruling BJP. Due to the gloomy atmosphere within the party, many small and big leaders of the Congress are migrating to other parties. They are all apprehensive about their political future with the Congress.

The Congress has been shrinking since 1989 and is in complete disarray in UP. Under Lallu’s leadership, the party finds itself in fourth place after the BJP, SP and BSP. Smaller parties like Rashtriya Lok Dal, Peace Party and AIMIM are gearing to overtake it in the coming elections. In the current situation, what are the options with Priyanka other than luring the voters by making false promises?

Coming to Priyanka’s promises, 40 percent party tickets is neither going to empower women in general, nor is the Congress going to reap benefits out of it. In fact, it is going to be a mammoth task for the party to find 161 women candidates who can contest elections. This announcement is nothing more than a political gimmick. Ironically, out of the 15 people present on the stage from which Priyanka made this announcement, there were only three women including herself! If the Congress was serious about women empowerment, why didn’t it make efforts to pass the Women’s Reservation Bill during the 10 years of the UPA regime? Or why was the composition of women in CWC and other Congress organisations not increased?

Caste began to play an important role in Indian elections after the implementation of the Mandal Commission report. Both UP and Bihar have served as the laboratories of caste-based politics since the early 1990s. However, the Lok Sabha elections of 2014 and 2019 and the last Assembly election of UP saw the magic of caste-based politics fading. People voted for development and change. It will be interesting to see whether the voters of UP vote for development and good governance in the upcoming elections or return to age-old caste politics. In the case of voting for development and good governance, the BJP sets the narrative better than any other party. The saffron party remains the first choice among upper castes too; Brahmins, Thakurs, Vaishyas and Bhumihars are seen to be the traditional BJP vote-banks, though many analysts believe that Brahmins aren’t too happy with the Yogi Adityanath government. In order to take advantage of this so-called dissatisfaction and resentment, and to woo the Brahmin voters, the SP and the BSP have been holding Brahmin or Prabuddha Sammelans. Slogans of Jai Shri Ram and Jai Parashuram are being raised aloud.

While most Yadavs and Muslims may again go with the Samajwadi Party, Jatavs are likely to join forces with the BSP, and Jats with RLD. Castes like Rajbhar, Saini, Nishad and Kurmi also have their preferred parties and affiliations. In the present scenario, no caste seems to be associated with the Congress. Nor does the Congress have a convincing and credible model of development and good governance.

Whenever asked about whether she’ll be contesting the UP elections, Priyanka ducks the question. The BJP is contesting the upcoming polls under Yogi Adityanath, SP under Akhilesh Yadav, and BSP under Mayawati. What election will a leaderless Congress contest — and win?

Priyanka’s hesitation on contesting elections makes her promises and claims even more dubious. This weakens the overall electoral strategy of the Congress. She should either contest the elections herself, or try to do a face-saver for the party by joining hands with regional parties like BSP or SP. Else, the Congress may find it difficult to even retain the fourth position in the state.