When Rahul Gandhi acted like China’s spokie, falsified India’s ties with US, EU

Rahul Gandhi increasingly seems to be doing China’s bidding. He should now come clean on his motivations to do so, and muster the courage to reveal the details of that 2008 MoU with the Chinese Communist Party. 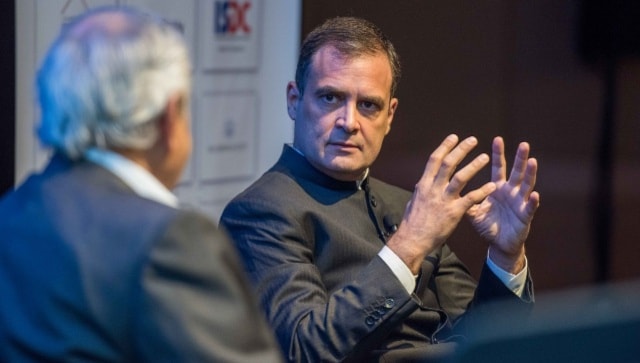 Congress MP Rahul Gandhi at the ‘Ideas for India’ conference in London. Twitter/@RahulGandhi

Congress leader Rahul Gandhi’s interview with associate professor Shruti Kapila at the University of Cambridge has made news for his obtrusively pregnant pauses. But a much more worrisome aspect was the content of his onstage musings, especially on foreign policy.

First, Rahul repeatedly balked at any criticism of China. He kept harping that China has a great offering for the world, which is prosperity and terrestrial trade and connectivity through its One Belt One Road (OBOR) initiative. Not once did he unequivocally say that behind that carrot lies the stick of predatory loans which have hollowed out the economies of Sri Lanka and Pakistan, and a ruthless expansionist gaze scorching Taiwan, Hong Kong, and even parts of his own nation, India.

Also read: Why Rahul Gandhi wore a bandhgala in London and Cambridge

The Congress scion seemed almost like a Chinese Communist Party (CCP) spokesperson, restrained only by the uncomfortable strings of domestic politics.

This China love would be a little less problematic if in the same interview he had not clubbed it with an egregious untruth about India-US relations.

Rahul Gandhi suggested that India and America engage only on defence, but not on economy or prosperity. That could not be farther from the truth.

The US is India’s largest trade partner. In 2021-22, Ministry of Commerce and Industry data shows that India’s goods trade with the US was nearly $119.4 billion. Exports stood at $76.1 billion, making America the largest destination for Indian exports.

With the European Union (EU), another ‘West’ block and India’s second largest trade partner, India’s goods trade in the same year was $116.2 billion. India’s exports to the EU was $65.9 billion.

In comparison, India’s goods trade with China in 2021-22 was $115.4 billion, but exports were only $21.3 billion, baring a huge trade imbalance. Trade deficit between the two countries in that period was reported at $77 billion.

That begs a few questions. Who is creating prosperity in India, the West or China? With a massive trade deficit, is India funding China’s prosperity? Rahul Gandhi may have these answers.

The US is also the largest destination for Indian exports. In 2021-22, India’s good exports to the US had been around $76 billion. The European was next, with Indian exports totalling nearly $65 billion, compared with exports worth $21.3 billion to China. Again, clearly, the West is driving export-led jobs in India.

Besides, the millions of IT and other service sector jobs for India are created by Western markets, not China. Can Rahul Gandhi explain how is that not a massive contribution to prosperity?

To suggest that defence cooperation is the biggest aspect of the India-US relationship is laughable. Defence cooperation with the US has just begun taking baby steps. India is still reliant on Russian arms and defence equipment, and the purchase of the Russian S-400 missile system has put India at risk of attracting US sanctions.

The interviewer, Kapila, did not challenge RaGa on these brazen falsehoods even once.

Rahul Gandhi’s assertions are extremely disturbing when one looks at the larger picture. China has not just historically been the aggressor. In the last five or six years, India had to defend against Chinese military aggression at Doklam, Galwan, Pangong Tso and other places. China has backed Pakistan against India, tried to block the UN from designating Pakistan-sponsored jihadis like Maulana Masood Azhar as global terrorists, and stands between India and a permanent seat in the UN Security Council.

It is, by its actions and words, India’s Enemy Number 1. The Indian democracy, its people and leadership, culturally identify a lot more with the West than with a soulless Communist dictatorship like China.

And yet, Rahul Gandhi persists. On behalf of the Indian National Congress in 2008, he signed a yet-undisclosed Memorandum of Understanding with the CCP. The Congress party refuses to divulge its contents to this day.

In spite of his politics of Muslim appeasement, Rahul has never spoken out against China’s mass incarcerations, disappearances, and cultural wipe-off of Uighur Muslims. Quite like Pakistan’s just-deposed PM Imran Khan.

He secretly met the Chinese envoy at the height of the Doklam standoff and has consistently spoken China’s language on crucial diplomatic and military issues, often against the Indian state.

Rahul increasingly seems to be doing China’s bidding. He should now come clean on his motivations to do so, and muster the courage to reveal the details of that 2008 MoU with the CCP. That may explain a lot of what is coming from Congress’s PM aspirant.