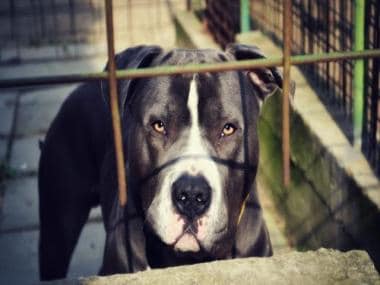 A pit bull in Gurugram was being taken for a walk when it attacked the woman and bit her. She has suffered injuries on her face and head. The incident comes a month after an 82-year-old woman was killed by her pet dog – a pit bull again – in Lucknow

A month after an 82-year-old woman was killed by her pet pit bull in Lucknow, another woman was attacked in Gurugram. A 30-year-old has been admitted to a hospital after the dog charged at her.

A First Information Report (FIR) has been registered against the owners of the pit bull after a complaint by a relative of the woman, news agency PTI reported. The woman, identified as Munni, has suffered serious injuries on her head and face.

Munni, who works as a domestic help, was walking near a housing society in Gurugram’s Civil Lines area when she was attacked by the pit bull. It was being walked by its owner.

According to the police, the owner left the dog’s harness loose and it first knocked down and then bit Munni. Locals rushed her to a nearby hospital, where she is reportedly battling for life. She works as a domestic help in the area, reports PTI.

However, this is not the first time a pit bull has proved to be a dangerous pet. In fact, incidents when a dog, pet or stray, attacked a person, leading to severe fatal injuries and even death, are not so rare

An old woman was mauled to death by her pet dog in Lucknow on 15 July. The dog, a pit bull, kept attacking the retired teacher for over an hour before she could be taken to the hospital, where she died of the injuries.

As per reports, the woman, Sushila Tripathi, lived with her son and two dogs, a pit bull and a labrador. She was attacked by the pit bull while walking the dogs on the house terrace.

According to Aaj Tak, the elderly woman received 12 fatal wounds on her stomach, neck, arms and legs. It is yet to be ascertained why the dog, who according to the woman’s son, was well taken care of by the family, went wild. The two dogs had separate air-conditioned rooms.

Now the killer pit bull has been returned to the owner and is adopted by one of the family’s close relatives, who is a dog lover.

The Lucknow Municipal Corporation had shifted the dog to Nagar Nigam’s animal birth control centre after it attacked the woman and kept it under observation for its behaviour.

As per a report by The Tribune, a stray dog killed a two-day-old infant in June this year in Panipat. The dog picked up the child from a private hospital’s ward in the wee hours. The infant was sleeping along with his grandmother in the ward.

The family members of the infant found the mutilated body of the child outside the hospital.

In another incident in Haryana’s Kurukshetra, a 10-year-old boy, Aman, was reportedly mauled to death by a pack of stray dogs in the fields of Chanarthal village.

As his parents were sowing paddy, Aman, along with his sister went to a nearby field to have some ‘jamun’. While the girl came back, the boy slept under the tree, and later got attacked by the stray dogs.

Twelve-year-old mauled to death by stray dogs in Hyderabad

In May this year, a 12-year-old boy was found dead allegedly after being attacked by a pack of stray dogs in the Kulsumpura area of Hyderabad. According to the New Indian Express, the deceased, Syed Sufiyan, a Class 5 student, had gone to the river for fishing when the dogs attacked him and mauled him to death.

In April, a two-and-a-half-year-old boy was attacked by strays. As per The Hindu, the CCTV footage captured by one of the residents showed the boy being set upon by the dogs and dragged. After a five-hour struggle at a public hospital, the boy was declared dead.

The incident occurred when the owner, Narendra Singh, went back to the dairy he ran to pick up some stuff. When two youths went to rescue Singh, they were also attacked by the dogs. However, they escaped with minor injuries.

In 2017, a 52-year-old caretaker of a farmhouse was brutally killed by a rottweiler dog that was kept as a guard dog.

According to a report by the Times of India, the dog kept attacking and eating the victim’s body for over an hour, even as police personnel tried to shoo the enraged dog away. It could not be ascertained what provoked the dog to attack the caretaker.

Earlier this year, a pet rottweiler dog attacked a 10-year-old boy in Noida. The dog was allegedly set upon the boy by its two owners, who were later arrested.

According to The Indian Express, in the video, the dog can be seen attacking the child and biting his leg even as a woman tries to push it away. Locals gather around and two of them hit the dog with sticks. The dog then runs off into the house.

In June 2021, a pitbull dog mauled an 11-year-old boy and left him with serious injuries on his face and neck in Jaipur. The victim’s family lived on rent in the pitbull owner’s house.

The dog crushed the facial bones of the boy and inflicted grievous injuries on his head, neck, thighs and hand before residents could rescue him. The police later booked the owner.