What is sewage testing and why is the Centre pushing for it as COVID-19 cases rise?

The water flushed down the toilet can help detect a new variant. As India sees a jump in cases, sewage surveillance will be part of the key strategy to monitor the spread of the coronavirus 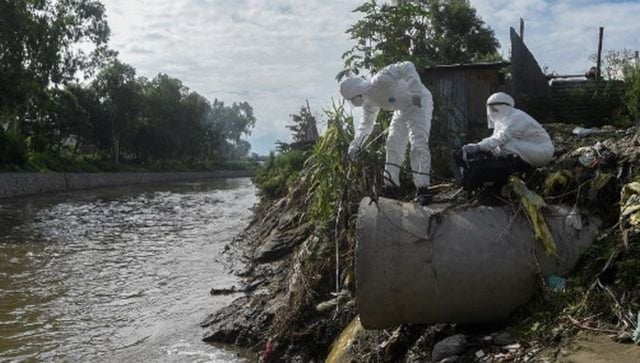 India started surveillance of sewage water for the early detection of the virus in 15 states across the country two weeks ago. AFP

We don’t know yet if the fourth wave is coming but there has been a spike in coronavirus cases. India today recorded a massive jump in daily COVID-19 count – 2,183 new cases have been recorded in the past 24 hours, an 89.8 per cent jump from Sunday’s case count of 1,150 cases.

The Centre is on its toes and already has some strategies in place. One of the most important among them is sewage testing.

What is sewage testing?

As the name suggests, sewage testing involves surveillance and monitoring of sewage water or the water that we flush down our toilets to look out for contaminants and viruses.

The virus needs a host cell to survive and the technique involves looking out for the genetic material or the RNA fragments of the virus in the wastewater, reports The Times of India. In case of COVID-19, the virus is SARS-CoV-2.

Infected patients shed virus fragments in the form of bodily fluids or faeces. Once flushed into the sewage system, the virus disintegrates, leaving behind fragments of the genetic material.

What happens after the samples are collected?

After wastewater samples are taken, they are sent to a laboratory, where scientists quantify the amount of virus present in it. The fragments are filtered and isolated from the wastewater to track the presence of the virus.

How effective is this method?

The method is useful in identifying the scale of the spread of the infection in a community. The amount of virus found in samples is an indicator of how widespread it is in an area. This information can then be used to impose restrictions on the movement of people if needed.

Sewage surveillance can help detect a new variant and the spread of COVID-19 in a community.

What is the Centre’s directive on sewage testing?

The Centre told states last week to send sewage samples to all sentinel sites that carry out the surveillance of poliovirus, reports The Indian Express.

“For years now, we are collecting these sewage water samples to detect the presence of any wild polio in India. These sites will now also carry out surveillance for Covid-19. There are more than 60 sites that will be carrying out the surveillance,” sources told the newspaper.

The National Centre for Disease Control is the coordinating agency monitoring any new variant detected through the sewage testing method.

INSACOG, which monitors genomic variations in SARS-CoV-2 in India, started surveillance of sewage water for detecting the virus in 15 states across the country two weeks ago, according to India Today.

Karnataka was the first state in the country to introduce a city sewage surveillance system in Bengaluru last year to identify potential COVID-19 clusters. Analysing wastewater for traces of the infectious disease to quickly identify which communities are experiencing an outbreak is cost-effective. AFP

Have other countries turned to wastewater surveillance during the pandemic?

In 2020, researchers in Australia developed an early warning surveillance system to track the community transmission of COVID-19 by tracing the presence of the virus’s genes in raw sewage.

The United States has used this method widely to track the spread of the virus.

Spain and the United Kingdom began regularly analysing usage for virus traces in May 2020. The UK expanded its testing of wastewater to cover about two-thirds of its population last year.

Hong Kong established routine city-wide sewage surveillance for COVID-19 at the end of December 2020. Testing sewage water has helped Nepal identify coronavirus hotspots. For the resource-strapped nation, the sewage test became an affordable weapon in the fight against the pandemic.

Wastewater testing is an economical method, the World Bank had said in January 2022 and had urged countries in Latin America and the Caribbean to deploy it to improve their testing.

Has this method been used for other conditions?

The use of sewage surveillance is not new. The method was recognised by Yale University in the 1960s when scientists were analysing the effectiveness of the polio vaccine, reports ToI.

Interestingly, a study conducted by Israeli researchers found the poliovirus in the sewage nine days before the identification of the first polio case.

Conspiracy theories on US spreading monkeypox are all over China’s social media, here’s why

How air ambulances are a boon to organ transplant