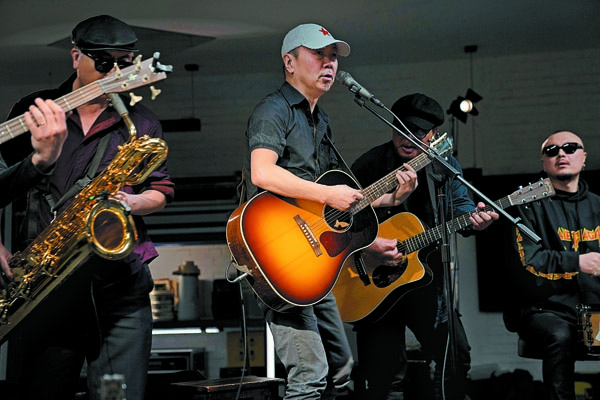 (China Daily) 40 million tune into the beat as music legend enthralls viewers, Chen Nan reports.
More than 40 million people spent Friday night online for the first virtual concert by Chinese rock legend Cui Jian and his band.
Even an hour before the concert started, about 8 million people waited online watching interviews of Cui’s band members and rehearsal footage.
During the two-hour concert, the 60-year-old Cui, wearing his trademark white baseball cap with a red star, performed about 20 songs, from his classics to his new works, including Solution, Frozen Light and B-Side of Time. He also invited Liang Bo, a young Chinese singer-songwriter, and Zhao Muyang, a veteran drummer and rock musician, to be his guest performers.
“Now, we are facing the same difficult time and I hope that music can help you regain your strength,” said Cui.
Ever since the COVID-19 pandemic forced clubs, bars and outdoor music festivals to shut down, music fans have been dreaming of the day that they can once again visit a crowded and energetic space to enjoy a gig with friends.
“The last time I watched Cui Jian’s live performance was in 2018 in an outdoor music festival. It was a very long time ago. I can feel the power of his music even across the screen,” commented a fan.
“I am giving him and his band a big applause though they cannot see it. I also sing along with them. The atmosphere is surprisingly good and it almost feels like a real concert with 40 million people rocking together,” said another fan.
Cui’s celebrity friends also expressed their excitement for the online concert.
“I’ve listened to his music since his first album, Rock ‘n’ Roll on the New Long March, was released in 1989. I can still remember the overwhelming experience I had when I watched Cui’s concert for the first time in 1990 in Xi’an,” said Xu Wei, 54, one of the country’s most popular rock singer-songwriters. “Now I write and perform songs just like him. He still inspires me.” 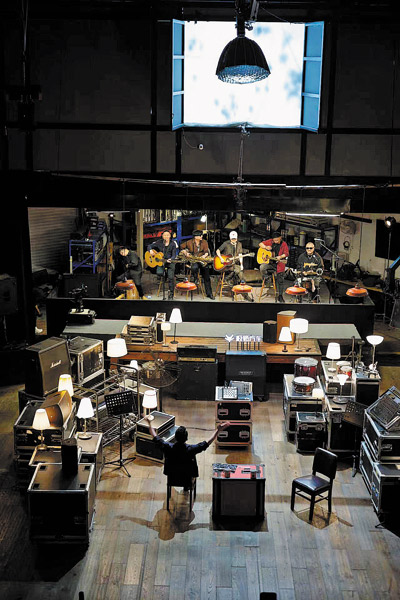 Cui and his band also embraced the unusual nature of the concert.
“We did a four-hour-long rehearsal before the concert. We have no audiences so we cannot have their instant feedback like we usually did in our concerts,” says Cui in an interview after the concert. During the concert, he called for fans to leave their messages and feedback online.
“I didn’t like the idea of real-time comments. Interaction should take place after a song, not when the song is still going on. But now I have changed my views. It’s a way for young people to express themselves and I am adjusting to it,” says Cui.
Born into an ethnic Korean family with parents who were both artists, Cui took up the trumpet at the age of 14, following his father, and in 1981 he began his musical career, joining the Beijing Philharmonic Orchestra. During his six years with it, he began writing some of his own songs and formed a band with six other musicians, one of the first of its kind in China.
When one flashes back to some of the most memorable moments of the 1980s music scene in China, Cui undoubtedly comes to mind.
First and foremost, there was his original hit, Nothing to My Name, which Cui, 25 then, performed in a concert at the Beijing Workers Stadium in 1986. At that time, few Chinese knew what rock ‘n’ roll was. At the packed venue, Cui performed the song, which marked the start of a long journey both for him and rock music in China.
He has been making waves for decades with his fusion of Western and Chinese music styles. Cui has released seven full-length albums, he says, and these have allowed him to try a diversity of musical genres, including hiphop, jazz and reggae.
Last year, Cui released his latest album, A Flying Dog, which, like some of his other albums, received mixed reviews among Chinese rock lovers, many highly impressed by Cui’s pioneering and rock ‘n’ roll spirit, but others calling it eccentric and impenetrable.
One of the songs featured in the new album is titled B-Side of Time, which is considered a reflection of Cui’s own life, referring to the first half of his life as the A side and the second half of his life as B side.
“I remain the same,” declared Cui in his virtual concert. It’s part of the lyrics from B-Side of Time, which he performed during the concert.
“The world changes. People change. But there are some parts of me that never change, like my ability to write songs and my passion for music,” says Cui.
“For Cui, it’s a challenge to launch a virtual concert. For decades, we toured and never stopped performing live. But now, this is obviously a very different time,” says Liu Yuan, a longtime friend and band member of Cui. The veteran saxophone player’s jamming session with Cui and other band members was one of the highlights of the concert.
“Rock music is a kind of language and reflects spirit. Cui Jian still rocks,” adds Liu.
Source: By Chen Nan | China Daily Global | Updated: 2022-04-21 08:26

Ronaldo thanks Liverpool fans for show of support