‘Valimai’ director Vinoth: Ajith’s favourite quote is ‘Everything will fall in place’

He first met actor Ajith Kumar fresh on the heels of his successful 2017 Karthi-starrer Theeran: Adhigaaram Ondru. At that time, Vinoth was selling the actor a script that featured a protagonist with shades of grey. Ajith, however, was not too keen on that, but insisted on remaking Hindi hit Pink in Tamil. “He wanted to do something I felt I was incapable of attempting,” laughs Vinoth, over a telephone chat, “That meeting didn’t go well.”

Also Read | Get ‘First Day First Show’, our weekly newsletter from the world of cinema, in your inbox. You can subscribe for free here

But that is now history. Today, Vinoth has become one of Ajith’s favourite directors and is fast rising to be among Kollywood’s popular filmmakers. He has already finished two films with the star: Nerkonda Paarvai (the remake of Pink he finally ended up doing) and upcoming Pongal release Valimai, touted to be one of the biggest projects of 2022. The story does not end there: Vinoth will again team up with Ajith and producer Boney Kapoor for their next project, which makes it three consecutive projects from the same team. Excerpts from an interview with the 40-year-old filmmaker, who seems to be on a dream run in Tamil cinema: I narrated a one-liner of the story. He was impressed that it was socially responsible and was sure that it would turn out to be a film that would entertain all audiences.

The last film you worked with him was a remake…was there inherent pressure to make Valimai more “mass”?

No, there wasn’t. The story we selected in the first place had all the elements of a mass, commercial entertainer.

There is a real-life connect to the storyline, we hear…

As the subject features bikes prominently, we started researching and stumbled upon the story of how late CM Jayalalithaa directly appointed a racer as a policeman. We tried scouting for him in order to hear his life story, but we couldn’t track him down. We have taken that one incident as a small inspiration for Valimai.

The ‘Valimai making’ video has grabbed a lot of eyeballs, especially the shot of Ajith falling and subsequently getting up during a bike ride sequence. How did you go about shooting that?

To capture what was happening during the bike sequence, we had another bike in front, in which the camera was fixed. We also had a car driving parallel to shoot background and side visuals. The cameraman sat in the car, and instructed Ajith via the bluetooth speaker inside his helmet. We were shooting all this in a seven-kilometre long road, with me taking stock from the start point. When the crew did not return within the stipulated time, we rushed there. Seeing a crowd gathered around, I assumed that they were checking if the shot was captured well. It was only when I got closer that I saw that the bike was broken and Ajith sir injured. What was so heartening was that despite that, he reported for shoot the next day, lest things get delayed. We put out this video to give people hope and inspiration, and convey that despite challenges, things will get better. 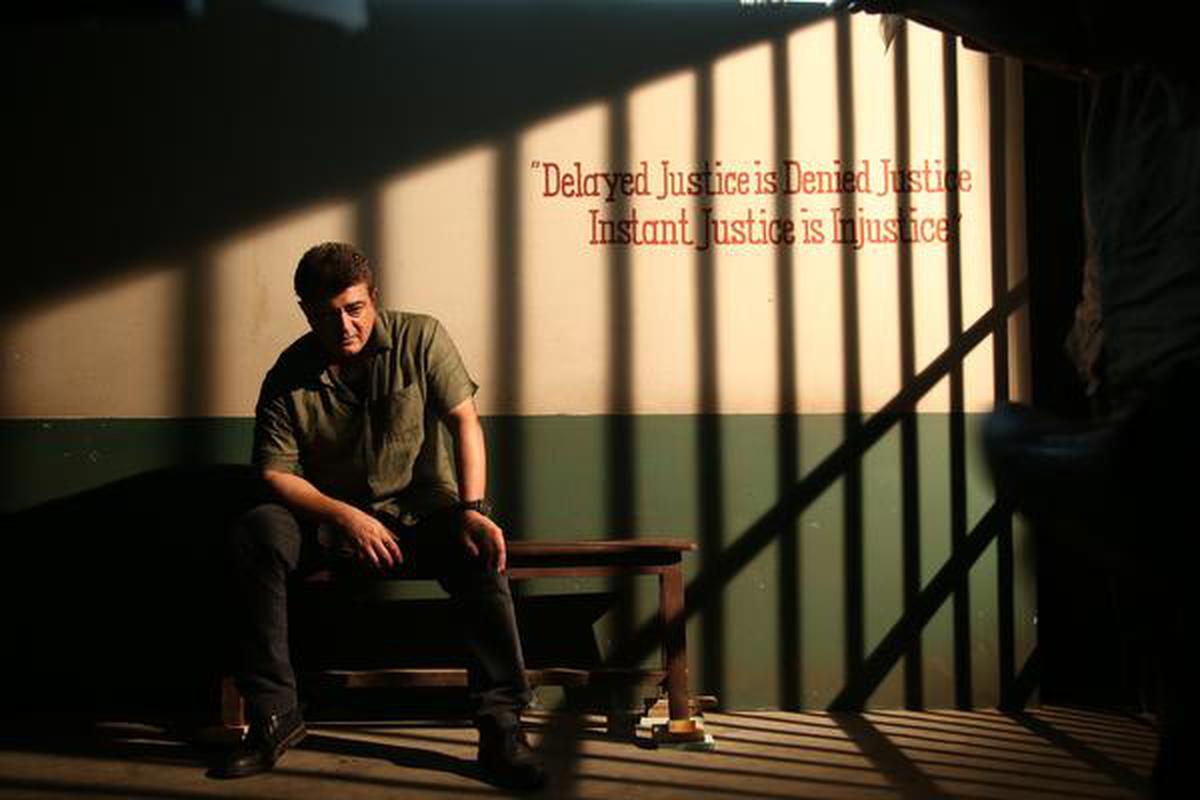 What do you think Ajith liked most in you to team up for three back-to-back projects?

Well, he has done it before, with director Siva (Ajith did Veeram, Vivegam and Viswasam with Siva). If Ajith feels comfortable with a person, he likes working with them continuously. I have myself told him this many times: ‘Sir, you should work with other directors too. Many assistant directors have written stories for you. If you work with them, they will also get a bright future, just like me’. He agrees with that, and he is meeting many other directors too, but he believes that there should be a spark for it to come together as a project.

From your first meeting with him as a new filmmaker to working three films now, how different or same is he as a person?

Every commercial director’s dream is to work with big names, but as a star, Ajith was so humble that it took me by surprise. He even served coffee for me! I’m going to be doing my third film with him now, but the excitement of seeing him has not dimmed till date.

Does he have a favourite quote that he often repeats on set?

He knows when I am down and when things are not going as planned. Whenever that happens, he will come to my side, tap my shoulder and say: ‘Everything will fall in place.’ How happy are you making a film that has a lot riding on its star value?

I am fully aware of that, and the challenge is to tap into that as effectively as possible. I am not here to take cinema to the next level. I am here to take my life to the next level, and I have chosen this as my path for that. It is a simple demand-supply concept: working with a star, knowing what he wants and what his fans and audiences want, and delivering that to the best of my capabilities.

As a filmgoer, what about cinema fascinated you the most during your growing-up years?

I was a big Rajinikanth fan during my younger days. Till the release of Padayappa, I have queued up for FDFS tickets outside theatres. You should see the scene after the jostle of tickets is over…there would be a hundred slippers strewn everywhere near the counter. There would be so much excitement then.

Your directorial journey is what the film industry would describe as a ‘dream run’. Do you feel that there is too much pressure too soon for you?

I am 40 now, so I don’t feel so much pressure. Had I started my career very early and all this happened, maybe I’d have felt the pressure. Do you think the pandemic has changed the way films are being thought of, and shot?

The first time the world spoke about social distancing, as filmmakers, we were thinking about how to film the lead pair standing next to each other, and how to shoot crowds. We have moved a long way since then, as we have realised that there are plenty of ways to execute things. The pandemic has taught filmmakers to do things that we already did in a more effective manner, keeping in mind safety protocols.

When you entered the film industry, you would have had certain dreams with respect to the style of filmmaking. Do you think you have achieved all of them?

I will not describe myself as a filmmaker with a lot of passion for cinema. I treat it purely as a profession. I do not have any big dreams; all I want is to ensure that the producer makes enough and the audience who pays for the film leaves the hall satisfied and entertained.