Kamala Harris is the highest-ranking Biden administration official to visit the country, marking a revival of ties after the tensions of the Duterte years. 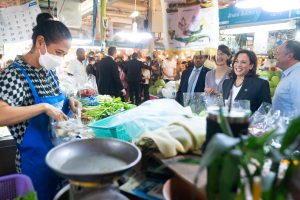 Fresh from attending last week’s APEC summit in Bangkok, U.S. Vice President Kamala Harris will arrive in the Philippines today for a three-day visit aimed at renewing and reaffirming the U.S. defense commitment to the country. She is scheduled to meet with President Ferdinand Marcos Jr. and other senior officials in Manila today, after which she will fly out to Palawan, the Philippines’ westernmost island, to meet with “residents, civil society leaders, and representatives of the Philippines Coast Guard.”

Harris will become the highest-ranking American official to visit the needle-shaped island, which lies adjacent to the disputed Spratly Islands, where China’s maximalist “nine-dash line” maritime claim cuts a swathe through Philippine-claimed waters. Palawan’s capital Puerto Princesa is also the seat of the municipal government of Kalayaan, which administers the scattered Philippine settlements in the Spratly Islands.

Given its proximity to disputed regions of the South China Sea, Harris will undoubtedly voice Washington’s concern about China’s pattern of assertive behavior in the South China Sea, and its support for the 2016 international tribunal ruling, brought by the Philippines in 2013, which invalidated China’s “nine-dash line” claim.

Prior to the visit, Reuters quoted a senior Biden administration official as saying that “the vice president will underscore our commitment to stand up for the international rules and norms because we recognize the impact that it has on Philippine lives and livelihoods.” After meeting with coast guard officials touring a coast guard vessel in Palawan tomorrow, she will and speak about “principles of sovereignty, territorial integrity, and freedom of navigation,” the official told the news agency.

The visit could well also see a formal announcement of the U.S. plan to spend $66.5 million on the construction of new training and warehouse facilities at three Philippine military bases, under the Enhanced Defense Cooperation Agreement (EDCA). The agreement, which was announced by the Philippines Department of National Defense last week, will focus on Basa Air Base in Pampanga, Fort Magsaysay in Nueva Ecija, and Lumbia Airport Base Station in Cagayan de Oro.

EDCA, which permitted the U.S. to deploy conventional forces in the Philippines at five Philippine bases chosen by Manila, was signed in 2014 but lapsed under the administration of President Rodrigo Duterte (2016-22), who distanced the Philippines from its long-time ally and deepened engagement with, and rhetorical support for, China.

Among the other bases included under EDCA is the Antonio Bautista Air Base in Puerto Princesa, the capital of Palawan. Contrary to earlier reporting from the Philippine Defense Department, the senior administration official quoted by Reuters said that the U.S. commitment totaled $82 million and would involve 21 projects at the five Philippine bases.

Harris will also become the senior-most Biden administration official to visit the Philippines, marking the latest sign of the revival of bilateral security relations after the Duterte years, and rendering null earlier suggestions that the controversial past of the Marcos clan would impede constructive relations with Washington. As the senior administration official told Reuters, Harris “will tell President Marcos that we are pleased to see our security ties in such strong position.”

The U.S. is clearly seeking to capitalize on the opening that has attended the change in administrations, with recent reports claiming that it has proposed constructing five additional facilities under EDCA, including, reportedly, a second base on Palawan.