New Delhi: ‘Bigg Boss’ fame Uorfi Javed and television actress Chahatt Khanna got into a war of words a month back and it seems both of them are in no mood to stop it. Their latest Instagram war started when Chahatt’s name emerged on alleged association with the conman Sukesh Chandrashekhar.

Uorfi took to her Instagram stories and took a dig at Chahat by sharing a screenshot of a news report on Chahatt Khanna and writing, “But I am the obnoxious one for dressing up indecently and paying the media! :)”

After Uorfi’s post, Chahatt wrote, “Without knowing the facts and jumping on the news for publicity and making a fool of yourself. Brainless se kya argument karna, agar akal hoti toh kaam karti ya shoot karti na ki semi Nude spottings karti, chalo koi na aap toh aunty, biwi ya maa ke layak toh ho nahi, ab dusro ko hi aunty bolke khush ho jao (There’s no point in arguing with somone who is brainless. If only she had brain, she would have worked and not gone around doing semi nude spottings. It’s okay you cannot become an aunty, wife or even a mother. Stay happy by calling others aunty) #Javed.”

Not the one to take anything lying down, Uorfi wrote back, “Word Semi nude per zara gaur farmaya jaaye! (Let’s look at the word semi nude).” She then shared Chahatt’s photos where she is seen wearing swimsuits. 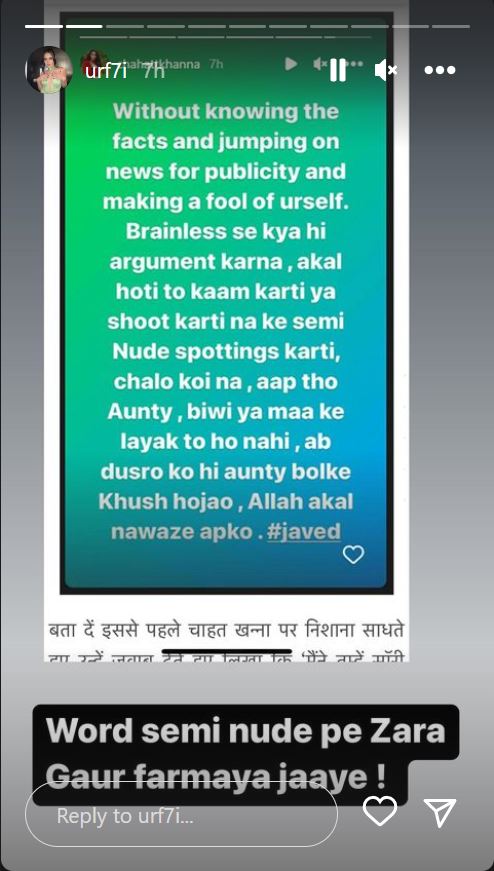 Earlier, Chahat had opened up about the reports of her alleged involvement and called it a ‘twisted’ portrayal of reality.

In a conversation with Hindustan Times, Chahatt said she prefers to laugh off all the claims and she will speak up when the right time comes.

“I have seen all the reports about my involvement. Actually, there is a lot that I want to say, but then I feel why should I have to clarify myself. It makes no sense right now (as the case is still on). It is not the time when I should or I need to clarify myself. I will definitely talk, not to defend myself, but to reveal what actually happened. Right now, what the media knows is just half of the whole story. When I say anything about the matter, the whole Chinese whisper game will begin. That’s why I want to stay quiet. But when the time comes, if I feel the need to tell the real story, I will definitely,” she told Hindustan Times.

Adil Hussain seeks answers: On ‘The Storyteller’ and ‘Max, Min and Meowzaki’

When & Where To Watch India Vs Australia 1st T20I