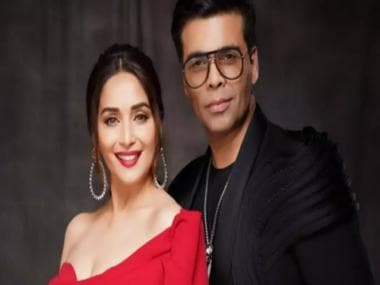 After beating TV biggies like Rubina Dilaik and Faisal Shaikh, former Dance Deewane contestant and finalist Gunjan Sinha of Guwahati has finally lifted the golden trophy of Jhalak Dikhhla Jaa 10 and bagged a cash prize of ₹20 lakh, with partner Tejas Verma and choreographer Sagar Bora. Now the eight-year-old was felicitated by the show judges of the dance reality show – actress Madhuri Dixit, and filmmaker Karan Johar. For almost three months, while the contestants have kept the audiences hooked to their seats, judges left no stone unturned in entertaining the viewers. With that being said, recently KJo and Madhuri have given a whirl to a viral social media trend together. Might be a bit late, but the filmmaker and actress duo has finally jumped on the bandwagon of social media influencer Aseyat’s trend.

Taking to her official Instagram account, the Devdas actress recently dropped a video of herself and Karan copying the hook steps of a viral trend, wherein you drop your shades on your face. Twinning in black, both Madhuri and Karan can be seen truly “Vibing” together, which is exactly the caption of Madhuri’s video and ended with a winking face with a tongue emoticon. The now-viral video opens with Madhuri and Karan matching the music’s beat with claps. Then after a pause of a second, the two can be seen banging their chests with the drum beats, and then for the show stopper both dropped their shades on their faces with a heavy nod. Later to which they were seen dancing freestyle. Whether behind the scenes or intriguing to their social media timeline, Jhalak Dikhhla Jaa’s judges’ trio Madhuri, Karan, and actress Nora Fatehi always made sure to keep their fans updated about the ongoing around reality show.

Bollywood’s Dhak Dhak girl looked nothing less than royalty in her black embellished lehenga set by one of India’s most celebrated designers, Anamika Khanna. Keeping her straight tresses open, Madhuri completed her look with high heels and statement jewellery. The black lehenga turned magnificent with its heavy borderwork in copper colour.

On the other hand, Karan carried her usual bling in his all-black sequined suit, which he gave a final touch with black high-heeled shoes.

Meanwhile, on the work front, Madhuri, after debuting on Netflix with her thriller drama series The Fame Game, was recently seen in the Prime Video movie Maja Ma. And Karan Johar has once again donned the director’s hat for his upcoming Rocky Aur Rani Ki Prem Kahani, which features Ranveer Singh and Alia Bhatt in the titular characters. Apart from the two, the movie which is expected to hit the theatres next year in April also stars Dharmendra and Shabana Azmi.