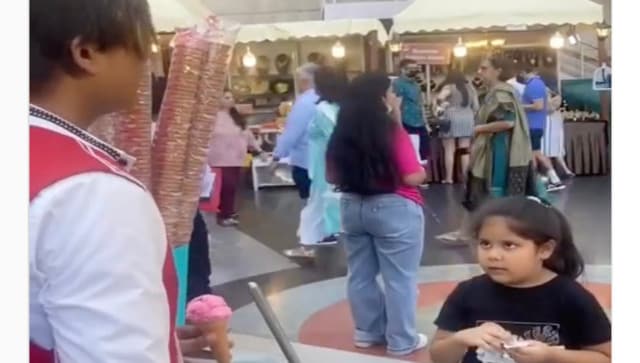 The little girl furiously stares at the Turkish ice cream vendors for playing a prank on her. Screengrab: Instagram

Even if you are living under a rock, in all probability, you must have witnessed several videos of Turkish ice cream sellers playing a prank on customers. Playing around with the cones, the Turkish ice cream vendors make sure to drench every last drop of patience from customers’ senses, leaving them frustrated. While the trick seemed extremely intriguing when initially the skilled vendors and the brand entered the country, the trick can truly leave you embarrassed or furious if you are at the receiving end of the ice cream. And this is exactly what happened with a little girl, who ended up crying with frustration. The incident came to light after a Twitter page shared the video, which started making rounds on the internet. The video was shared with the caption, “Why are you troubling the poor girl?”

The now-viral video opens by showing a little girl standing at the ice cream stall to get ice cream, while the men standing behind the counter are recording the entire scenario. The child can be seen crying as the vendor is not leaving a stone unturned to finish his pranks. Every time the little girl tries to get hold of the ice cream cone, the vendor puts forward a new trick. Even elders can’t escape the trademark trick of the Turkish ice cream seller, how is the little one supposed to triumph over that? Every time she tries to grab the cone, the ice cream scoop is stuck to his rod, and the girl ends up grabbing the empty cone. In all her frustration of not getting the ice cream scoop in her cone, the girl can be seen throwing the cones back at him.

The girl was left so agitated that she ended up crying inconsolably. The video concludes with one of the men standing next to her picking her up in arms to calm her down. The video seems to be taken at a wedding, as a few men decked in their formal best can be seen gathered around the girl. The video was uploaded with legendary singer Nusrat Fateh Ali Khan’s viral song Kali Kali Zulfon Ke being played in the background. Earlier, the internet brought forth another video, wherein the Turkish ice cream seller tricked a little chubby girl, who gave him a death stare. Asking her to lick the ice cream, the vendor ended up putting a napkin in her mouth. Observing the same, the little girl gave him a completely unforgettable look.

So far, the video has played more than 60 lakh times and has garnered over 3.2 lakh likes.