Two Chinese spy ships, Yuan Wang 6 and Yuan Wang 5, meander the Indian Ocean Region (IOR) following the first NOTAM (notice to airmen) issued by India near one of its missile launch sites based in Odisha

Two survey vessels from China earlier speculated to reconnoitre the Indian Ocean anticipating the test launch of India’s Agni 3 Intermediate Range Ballistic Missile were seen in the South China sea during the launch period. The suspicions around the Chinese spy vessels were fuelled due to their initial movement when India announced its first flight restriction zone earlier this month.

However, amid multiple changes in the launch window, China’s survey vessel Yuan Wang 6 along with its shady counterpart Yuan Wang 5 changed their course.

Yuan Wang 5 was in the news recently due to its docking at Sri Lanka’s Hambantota port just a few months back despite receiving constant denunciations from India. The research ships were seen in the Indian Ocean as India issued an area warning for Nov 10-11, suggesting an upcoming ballistic missile test. It was also speculated by the maritime intelligence handles. The area warnings have been deferred several times since then, leaving the Chinese vessels guessing.

The Chinese spy ship Yuan Wang 6 initiated its trip on 21 October, the same day India tested its new-gen ‘Agni Prime’ missile. Shortly after, another People’s Liberation Army Navy (PLAN) survey vessel with a murky past, Yuan Wang 5, was sent to sail into the waters on November 1.

India’s testing of its ballistic missile from the Agni series was widely anticipated. India had also launched a Submarine Launched Ballistic Missile (SLBM) from its state-of-the-art nuclear submarine INS Arihant, just twenty days before the movement of Yuan Wang 6.

After a brief period of sailing along the same region in a zig-zag format, both the PLA Navy vessels at last decided to steer their way back to China on November 11, soon after the current area warnings for the Bay of Bengal region were extended, which too was further postponed to November 23-24.

The sequence in which each event unfolded and its correlation with certain missile launches and the area warnings appear to be more than merely a coincidence. 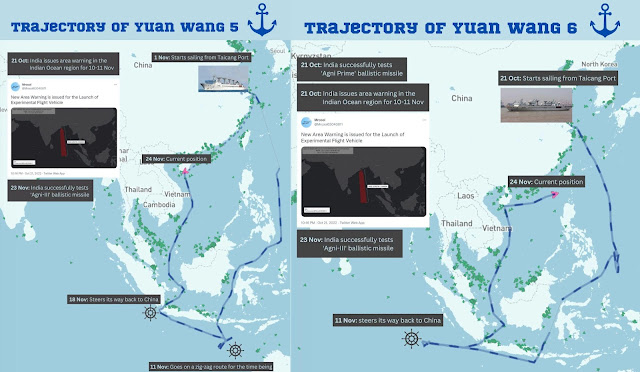 The Agni-III missile was successfully tested on Wednesday at the APJ Abdul Kalam Island off the Odisha coast by the Strategic Forces Command, which in turn is a part of the Nuclear Command Authority. The Defence Ministry confirmed in a statement that “the successful test of the Agni-3 was part of routine user training launches carried out under the aegis of the Strategic Forces Command. The launch was carried out for a predetermined range and validated all operational parameters of the system.”

The Indian Navy has been monitoring the two suspicious vessels closely which are doing rounds in the Exclusive Economic Zones (EEZs) of the Indian Ocean Region.

An identical incident happened in 2019 when a Chinese spy ship named Shi Yan 1 was apparently monitoring the Andaman and Nicobar region and the Indian Navy warships had chased it away.

Why China Under Xi Poses Military Threat To India