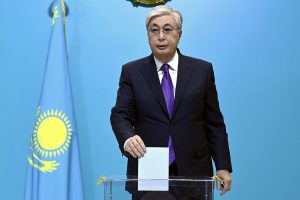 Kazakh President Kassym-Jomart Tokayev secured a second term in office after a snap presidential election on November 20 saw him receive 81.3 percent of the vote, according to preliminary data, against a field of political nobodies.

The second place finisher in the poll was the “Against all” option, with 5.8 percent of the votes, highlighting just how weak the field of candidates were.

Preliminary findings from the Organization for Security and Cooperation in Europe (OSCE) monitoring mission, run by the Office for Democratic Institutions and Human Rights (ODIHR) deemed the election “efficiently prepared” but “lacking competitiveness.”

“A lack of pluralism played a significant role in undermining competitiveness in this election, and limitations on free speech and a lack of opportunity to conduct peaceful assemblies narrowed the space for critical voices,” Urszula Gacek, head of the election observation mission, said.

In particular, the OSCE/ODIHR findings noted that “eligibility requirements for presidential candidates are overly restrictive.” These include an age minimum of 40, Kazakh fluency, citizenship by birth, higher education requirements, and official residency of 15 years. In addition, independent candidates are not allowed to stand for election in Kazakhstan and Kazakh authorities have demonstrated reluctance to register new political parties.

The collective effect of these restrictions over the course of 30 years impedes any meaningful opposition from forming.

Meanwhile, what political parties do exist in Kazakhstan are all pro-government. Tokayev was jointly nominated by all three parties currently in parliament: the ruling Amanat, the Democratic Party of Kazakhstan (Ak Zhol), and the People’s Party of Kazakhstan. That neither of the nominal “opposition” parties bothered to nominate their own candidates underscores the abject lack of competition in Kazakhstan’s political space.

Tokayev called for an early presidential election, as well as early parliamentary elections, in September. Shortly thereafter, legislation passed that extended the presidential term from five to seven years and introduced a single term limit.

In announcing the proposed changes in a State of the Nation address, Tokayev said, “Seven years is a sufficient period to implement any ambitious program.”

Tokayev became president in March 2019 after longtime Kazakh leader Nursultan Nazarbayev resigned. He called for an early presidential election that summer in which he took 70.96 percent of the vote. Under the updated rules, Tokayev will now stay in power through 2029 — for a total of 10 years.

Tokayev has spoken often of a “New Kazakhstan,” and ushered through a constitutional referendum in the summer of 2022 with that tagline. The presidential election, however, was very much in the vein of old Kazakhstan.