Why did Pelosi go to Taiwan? Because Congress’ stance is particularly important for ensuring U.S. deterrence. 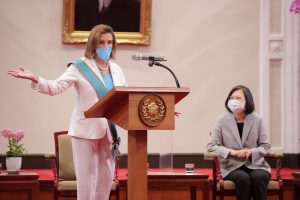 U.S. House Speaker Nancy Pelosi’s visit to Taiwan has been mired in controversy. Why did she decide to visit Taiwan at such a sensitive time in China-U.S. relations, when Xi Jinping is approaching a third term as China’s paramount leader and may be particularly assertive on Taiwan? Was there a point to this trip? Did she doing something meaningful to promote peace and security in the Taiwan Strait or was this only about the speeches and the photo ops?

Some might decry the trip as posturing, but it does have a strategic logic. In her op-ed in The Washington Post explaining her visit, Pelosi quotes from the Taiwan Relations Act and then goes on to say that “our congressional delegation’s visit should be seen as an unequivocal statement that America stands with Taiwan.” At the end of her trip, she declared that the United States’ commitment to Taiwan’s democracy was “ironclad.” This is not empty rhetoric.

The United States seeks to deter Beijing from using military coercion against the island, and Congress has a major role, both de jure and de facto, to play in the success — or failure — of such deterrence. De jure, the Taiwan Relations Act and the U.S. Constitution give Congress an important role in deciding how the United States would respond to a contingency in the Taiwan Strait. De facto, while presidents have asserted broad unilateral powers in deciding when to utilize military force, deterrent threats made by the executive are far more credible when backed up by Congress.

In the debate on strategic ambiguity and strategic clarity, it is often assumed that the president has the authority to decide whether or not the United States would defend Taiwan. When U.S. President Joe Biden suggested a change in policy by saying that the United States would intervene, there was little debate that he had the authority to do so. But it’s not that simple. The Taiwan Relations Act, which has long been a cornerstone of the United States’ One China policy, gives Congress an equal role to that of the president in deciding the United States’ response. Subsection 3(3) of the Taiwan Relations Act says that “the President and the Congress shall determine, in accordance with constitutional processes, appropriate action by the United States in response to any such danger” to Taiwan (emphasis added). Now that Biden has revealed his preferences, Congress is the missing element.

How would anyone form a reasonable estimate of how Congress would react if China were to attack the island? The Eisenhower administration faced this exact problem during the First Taiwan Strait Crisis, and the president’s solution at that time was to request the legislature’s formal approval for the use of military force. This yielded the so-called “Formosa Resolution,” whose specific purpose was, like U.S. policy today, to deter communist action against Taiwan. After the repeal of the Formosa Resolution in 1974, the United States has been left with two levels of strategic ambiguity for the two branches of government involved in deciding how to respond to a crisis in the Taiwan Strait. Pelosi’s visit is not an attempt to erode strategic ambiguity, but it is an attempt to deter Beijing from unilaterally changing the status quo.

The risks of further escalation are alarming. The Chinese Communist Party could (and likely does) interpret Pelosi’s visit as an erosion of the unofficial character of Taiwan-U.S. relations, and it may follow through on its alarming threats to use force against Taiwan. But before dismissing Pelosi’s visit as being needlessly provocative, one should recognize the strategic logic behind what she did. In the absence of a congressional authorization for the United States to use military force in the Taiwan Strait — the passage of which would likely be far more provocative than Pelosi’s trip — this kind of visit signals that Congress would not tie the president’s hands in a Taiwan contingency.

But even though there is a strategic logic to Pelosi’s visit, the logic itself points to the weakness, not the strength, of the United States’ Taiwan policy. Bonnie Glaser and Zach Cooper have aptly called the policy “strategic confusion,” and Pelosi’s visit is a symptom of that confusion. The president says there’s a commitment to Taiwan when there isn’t one; the White House immediately walks back his statements. The president calls Taiwan independent, and the secretary of state calls Taiwan a country (twice), even though the United States is officially neutral on Taiwan’s status under the One China policy. The speaker of the House visits Taiwan and sparks a crisis with Beijing to show congressional support. The United States seems to be improvising its Taiwan policy, fueling Beijing’s suspicions about the United States’ true intentions and raising the risk of a conflict in the Taiwan Strait.

Indian Army Yet To Get Corner Shot Weapon System, Included In The Wish List But Delays In Acquiring

Atmanirbhar Bharat, A Rousing Success In The Defence Sector