The Problem With India’s Multiple Strategic Dalliances  – The Diplomat 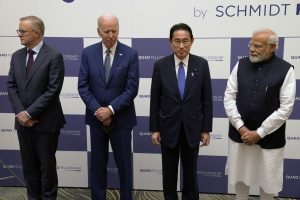 India has been engaging with multiple minilaterals, from the Quad to BRICS and even the SCO. On the one hand, India is ensuring that New Delhi maintains good relations with all major powers. But this strategy also includes the inherent danger of nobody taking India seriously because New Delhi risks becoming undependable to everybody. This will limit the effectiveness of India’s strategy because a strategy of multiple alignments assumes that others will have some faith, trust and dependence on India despite other, possibly contrary, partnerships. If nobody depends on India or has faith in India, these alignments become meaningless talk shops that will be of no benefit to India in times of need.

Prime Minister Narendra Modi was in Japan recently for the second in-person Quad summit.  Modi used the opportunity to hold one-on-one meetings with all the Quad leaders: U.S. President Joe Biden, Japanese Prime Minister Kishida Fumio and new Australian Prime Minister Anthony Albanese. This is the fourth Quad Summit since their first gathering in March 2021 and is an indication of the sustained high-level political attention from all four countries.

It is also a sign of the worsening political and security landscape that has compelled the four countries to step up their interactions. The Russian invasion of Ukraine and the continuing humanitarian crisis in Europe were high on the agenda at the Quad meeting. On the Ukraine crisis, the Quad countries, with the exception of India, have imposed severe sanctions on Russia. India not only has not joined in sanctioning Russia, but it has so far failed to call out Moscow or Putin by name for the humanitarian crisis in Ukraine. Not only that, India is also buying more oil from Russia because Moscow is providing it at a heavily discounted rate.  New Delhi says that India’s oil purchase is a means to secure its energy security interests and that it should not be politicized.

Meanwhile, India hosted a Shanghai Cooperation Organization (SCO) counterterrorism meeting just a few days ago. India took over as the chair of the Council of Regional Anti-Terrorist Structure of SCO (RATS-SCO) in October last year for a one-year term. Consequently, India hosted counterterrorism experts from the other SCO member countries – China, Kazakhstan, Kyrgyzstan, Pakistan, Russia, Tajikistan, and Uzbekistan – to explore ways to strengthen cooperation in addressing a number of regional security challenges.  Indian media reports, citing officials, noted that the threat of terror groups operating out of Afghanistan captured a chunk of the discussions in New Delhi. Later this year, in October, the SCO plans to hold joint anti-terror exercises involving security personnel at the National Security Guard (NSG) facility in Manesar near Delhi. India is supposed to be hosting the SCO Summit in 2023. It should make for an interesting event given the continuing India-China military confrontation on the Tibet border. China and Pakistan in November declined an invitation from India to a regional meeting of the National Security Advisers (NSAs) including those from the five Central Asian states, and Russia. The meeting was convened in order to discuss ways to counter threats from Afghanistan after the Taliban took power in Kabul.

Meanwhile, India is getting ready to participate in the meetings of another minilateral, the BRICS, which involves Brazil, Russia, India, China and South Africa. India recently attended the BRICS Sherpas meeting. This will be followed by the BRICS Summit, to be hosted by China virtually toward the end of June. The BRICS Sherpas meeting reportedly discussed the many challenges faced by the region and beyond including the COVID-19 pandemic and the post-pandemic revitalization of regional economies. Meanwhile, China, which is BRICS Chair for the year, is keen to expand the grouping to include other developing countries.  Reportedly, the BRICS Foreign Ministers recently agreed on a BRICS expansion. Following the BRICS Foreign Ministers’ virtual meeting on May 19, Chinese Foreign Ministry spokesperson Wang Wenbin said that “China will work on BRICS-related parties to continue to have in-depth discussions on BRICS expansion and determine the standards and procedures for that on the basis of consensus. We look forward to more like-minded partners joining the big family of BRICS.”  This year’s BRICS Foreign Ministers meeting in May also included foreign ministers of potential new members such as Argentina, Egypt, Indonesia, Kazakhstan, Saudi Arabia, UAE, Nigeria, Senegal and Thailand. Wang went on to add that “BRICS countries agree that it is important to enhance cooperation with other emerging markets and developing countries, further improve the representation of BRICS, make BRICS’ voice in major international and regional issues more widely heard, join hands to meet challenges, and uphold the common interests and development space of emerging markets and developing countries.”  The BRICS-supported New Development Bank (NDB) has new members including Bangladesh and UAE, who joined last year, while Egypt and Uruguay are ready to join the Bank soon.

India is the odd man out in all of these groups, whether it is in the Quad, BRICS or the SCO. In each, other key members have closer ties with each other than any of them do with India.  This is potentially problematic because a friend to all will possibly not have any friends to depend upon when in danger.

Constitutional Changes Ahead for Uzbekistan – The Diplomat