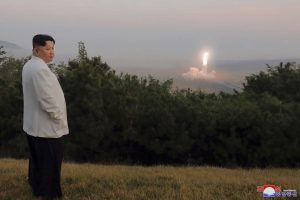 This photo provided on Oct. 10, 2022, by the North Korean government, North Korean leader Kim Jong Un inspects a missile test at an undisclosed location in North Korea. The content of this image is as provided and cannot be independently verified.

The recent wave of North Korean missile tests and other military provocations  has sparked a flurry of supposition about the country’s motivation. Much of this speculation, however, shares a common flaw: the assumption that North Korea’s actions should be understood in connection to external rather than internal factors.

Some see the tests as a response to recent South Korea-U.S. military drills and an effort to perfect North Korea’s defensive capabilities. Others claim they are part of leader Kim Jong Un’s strategy to win concessions from the outside world by creating a crisis that he can then defuse in exchange for certain benefits. Some see it as part of an offensive tactic intended to pressure the South and pave the way for eventual conquest. Still others put the Ukraine War at the heart of the story, claiming that Kim is inspired by the success of Putin’s nuclear threats in Ukraine, and feels confident that the war will prevent any substantial response against the North. Such views, however, reflect a Western-centric perspective that overstates the importance of the U.S.-led alliance on world events and minimizes the critical domestic imperatives that often drive policymaking. Officials tasked with formulating a response to this most recent wave of North Korean provocations would be wise to recognize that events in Pyongyang matter more than events in Washington, D.C.

Historically, the North Korean government launches its most provocative foreign policy moves when it faces particularly intense problems at home. In the late 1960s, a combination of economic decline and tensions with his superpower allies left Kim Il Sung facing his biggest political challenge in a decade. He responded by launching a wave of miliary aggression against South Korea and the United States so severe that some have called it the “Second Korean War.” Hundreds died in a series of cross-border incidents, which included a failed assassination attempt targeting South Korean President Park Chung-hee and the capture of a U.S. spy ship operating in international waters that left one sailor dead and 82 others in North Korean prison camps for almost a year.

In the mid-1990s, the North Korean economy cratered so badly that it caused mass starvation and death, at roughly the same time that Kim Jong Il, Kim Il Sung’s son, was consolidating power. The government reacted to these joint challenges by threatening to withdraw from the Nuclear Non-Proliferation Treaty and removing spent fuel rods from their main nuclear site in order to extract the plutonium, taking the country to the brink of war with the United States. Even after the war scare died down in 1994, life inside North Korea continued to worsen, with starvation and disease ravaging the country and an increased dependence on foreign aid (including from the U.S.). North Korea responded with a submarine incursion into South Korea that set off a series of firefights that left almost 40 people dead, and then tested its first three-stage missile across Japan and into the Pacific.

This tactic of sparking a foreign crisis in order to divert domestic unhappiness is not unique, but it is perhaps more enmeshed in North Korean policymaking than it is anywhere else, as a result of a decades-long effort by the Kim regime to inculcate a specific ideological system within its population that keeps the family in power. North Korean people are taught from birth of the superiority, purity, and innocence of the Korean race; the omnipresent threats to their people by the perfidious United States; and the need for strong indigenous leadership to ward off these threats while leading the nation down the correct path toward a socialist revolution. Most domestic shortcomings can thus be explained away as a consequence of Western treachery, but serious failures call into question the fundamental rationale for the Kim dictatorship. If the nation is struggling dramatically at home while also being seen as impotent abroad, the raison d’etre of the regime collapses. Accordingly, the leadership has historically responded to its most serious challenges by seeking to demonstrate to their domestic audience that in this critical relationship with their greatest rivals, the Kim family remains the last line of defense for the North Korean people.

Current North Korean behavior seems to fall into this pattern. Recent evidence suggests that the nation’s economy has been much harder hit than most realize, due largely to COVID-driven isolation, international sanctions, global inflation, and internal mismanagement. The best analysis, done by the Peterson Institute of International Economics, finds the current moment to be the worst since the great famines of the mid-1990s, and concludes that in the most recent harvest cycle, “North Korea has probably fallen below the level of minimum human needs.”

It’s no coincidence that, during this time, the state media has stressed North Korea’s military strength, with a particular focus on the missile program that has long been promoted as a sign of national strength and independence and directly linked to the Kim government, offering a bounty of badly needed domestic propaganda. Particular propaganda themes have stressed the central role and expert guidance of Kim Jong Un in these military developments; encouraged a sense of national pride associated with this progress; and urged the audience to be willing to sacrifice to ensure the nation’s security. All of this seems intended to reinforce the standing of the Kim regime more than to accomplish any practical international objective.

Many factors, of course, likely lie behind North Korea’s recent behavior. Strategy, geopolitics, and perceptions of security are no doubt relevant to the current moment. The role of internal political imperatives, however, is largely being overlooked. U.S. policymakers often claim that “all politics is local.” They need to remember that sometimes geopolitics can be local also.