The annual chariot festivals celebrated in temples across Tamil Nadu is on. Each one is unique in its own way

The celebration of car festival in temples is an age-old practice in India. It is said that there are references about the word ‘car’ (Ratha) in the Rig and Atharva Vedas, and that there is a mention of ‘car festival’ in the Shatapatha Brahmana, an important Sanskrit text. Also texts such as the ‘Padma’, ‘Skanda’, and ‘Bhavishya’ puranas mention about car festivals being held in temples. There are references about military and royal chariots in the Ramayana, the Mahabaratha, and other Tamil literary works. But, the use of chariots in temples has a significance. All over the world, the movement of the Sun god, by a car, is well established in various texts. Over the millennia, various deities were associated with the ‘Sun God’, who is also referred to as the ‘God of friendship’ in the Rig veda, and by extension with the car festivals.

Among the various festivals like float festival, and adhyayana utsavams, held in temples, car festival is considered one the most significant. Besides the ritualistic practices, there have been a social purpose too, behind introducing chariots in temple worship.

Since a chariot is a moving temple, it makes it possible for the infirm, the poor, and the aged to worship their favourite deities, not by visiting the deity at the temple, but by getting the darshan of the deities at their doorsteps. Also, a temple car being drawn by a huge number of devotees, who represent different strata of the society, signifies that everybody is equal before god.

The Tiruvarur chariot is known for being one of the largest of its kind in Asia. The 30-ft tall temple car rises to 96 ft., after the completion of decoration, and the kalasam alone accounts for six ft, thus making the chariot’s overall weight as 220 tonnes to 350 tonnes. The ‘Tiruvarur therottam’, or the Azhi ther, as it is popularly called, is a historical event that is associated with the Tiruvarur Tyagarajaswamy temple. The ‘Aazhi Ther’ event is mentioned in the ancient Tamil epic Silappathikaram and also in the Thevaram hymns by the Saivite saints Appar, Sundarar, Manickavachagar, and Thirugnanasambandar. Usually held between March and April every year, the festival lasts more than 25 days. The car festival of Andal Temple in Srivilliputhur.
| Photo Credit: The Hindu Archives

The birth place of Andal Nachiyar, who composed the Tamil hymns, Thiruppavai, Srivilliputhur is well-known for its Aadi Pooram car festival. 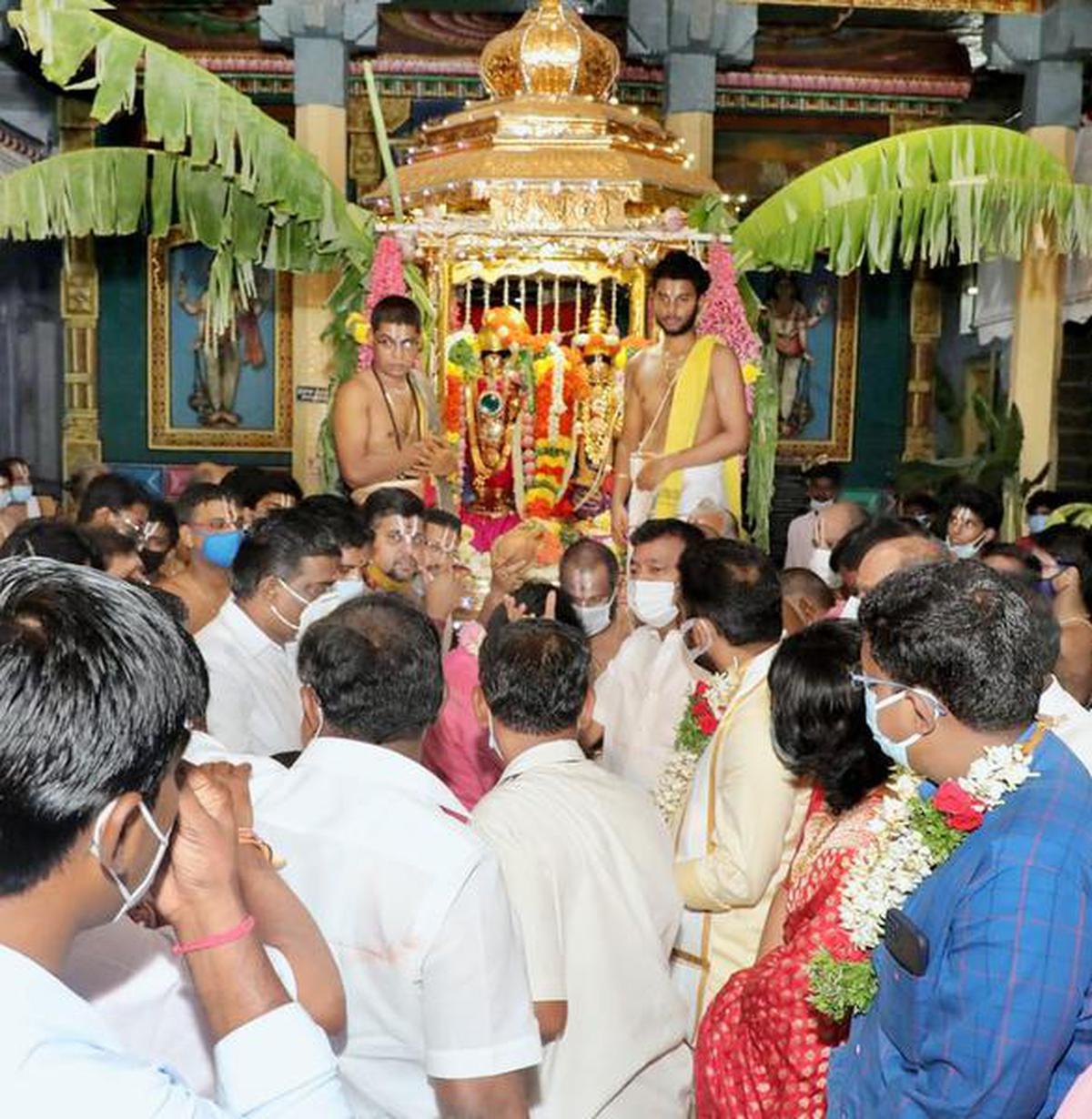 Lord Rengamannar and Goddess Andal being brought in a procession inside Andal temple in Srivilliputtur.
| Photo Credit: Special Arrangement

It is one of the important festivals celebrated here, which marks the adoption of Andal, by Periyazhwar, after he found her at the Vatapatrasayi Temple, in Srivilliputhur, on the eighth day of the Tamil month of  Aadi. On the Aadi pooram day, the presiding deities, Sri Rengamannar and Goddess Andal, are taken in decorated palanquins to the car. It is said that the temple ther was kept idle for 18 years, and the practice of drawing the temple chariot during the yearly festival remained suspended until 2000.

The Madurai Ther festival, also called as the annual chithirai festival, or the chithirai thiruvizha, marks the celestial wedding of Goddess Meenakshi with Lord Sundareswarar. 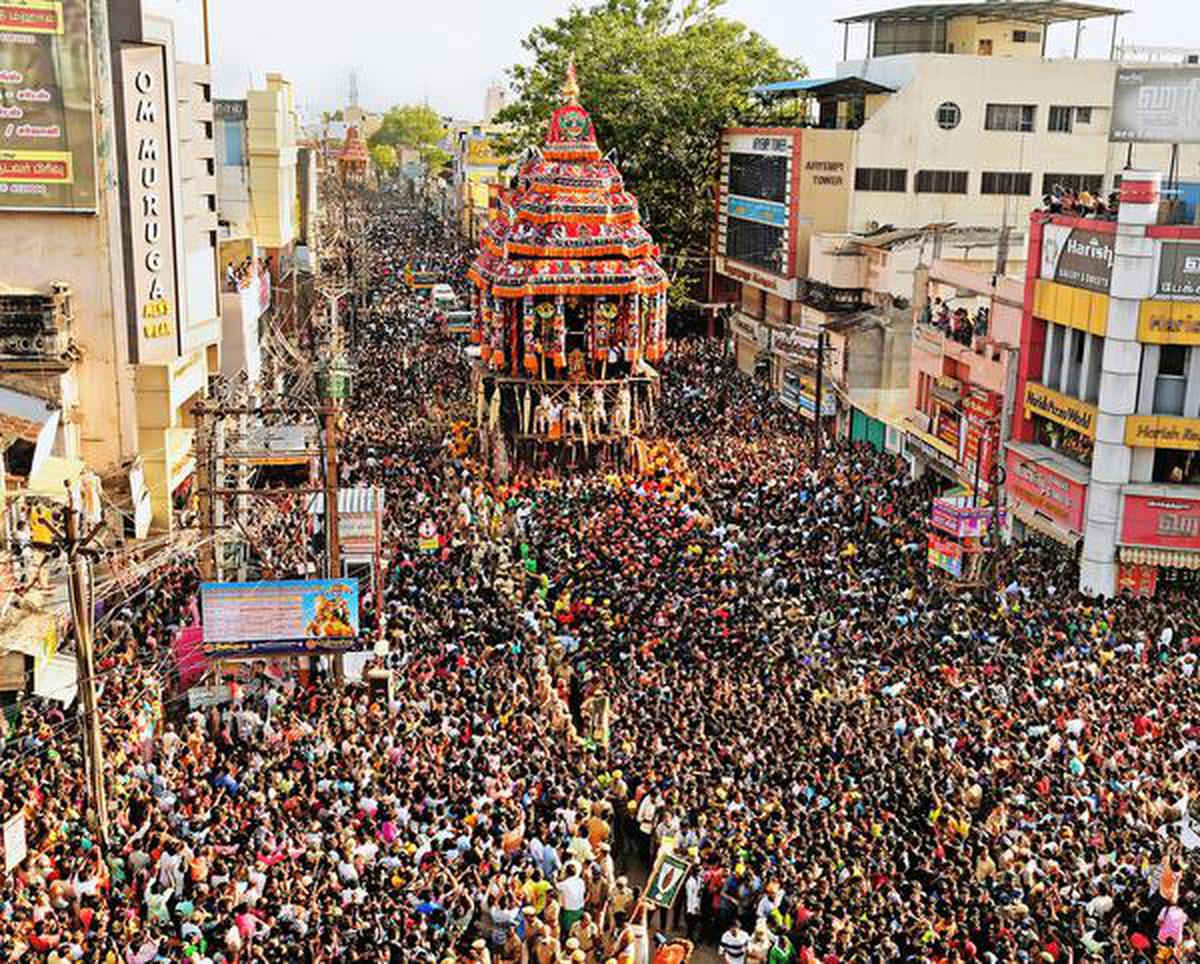 The festival lasts for one month. The first 15 days mark the celebrations of the coronation of Meenakshi as the ruler of Madurai, and her wedding. The next 15 days mark the celebrations of the journey of Kallazhagar, (Lord Vishnu) from his temple in Azhagar Koil to Madurai. There is a legendary background associated with the Meenakshi wedding, and the event of Kallazhagar coming to Madurai. 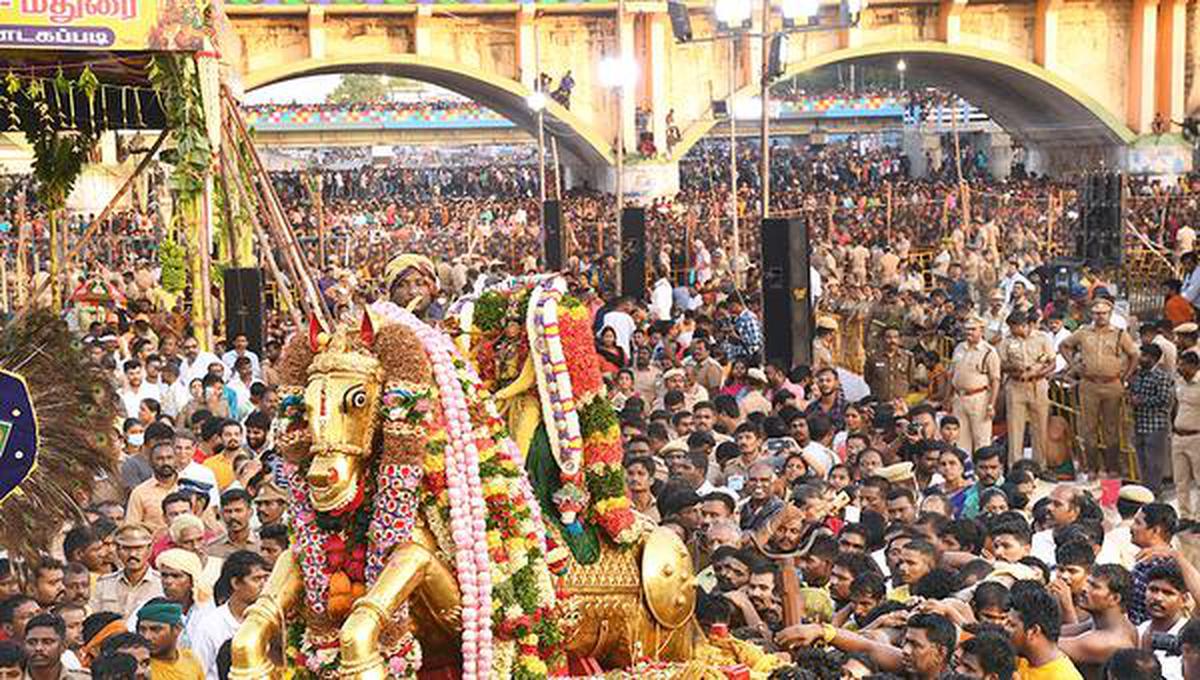 Legend has it that, the arrangements are made for Meenakshi-Sundareswar wedding to take place in Madurai, and Azhagar, Meenakshi’s brother, is invited. But when Azhagar, who starts on a 20 km journey from his abode at Azhagar Hills towards Madurai, could not reach on time, Sundareswarar performs the Kannikadhanam, in the guise of Azhagar (Vishnu). 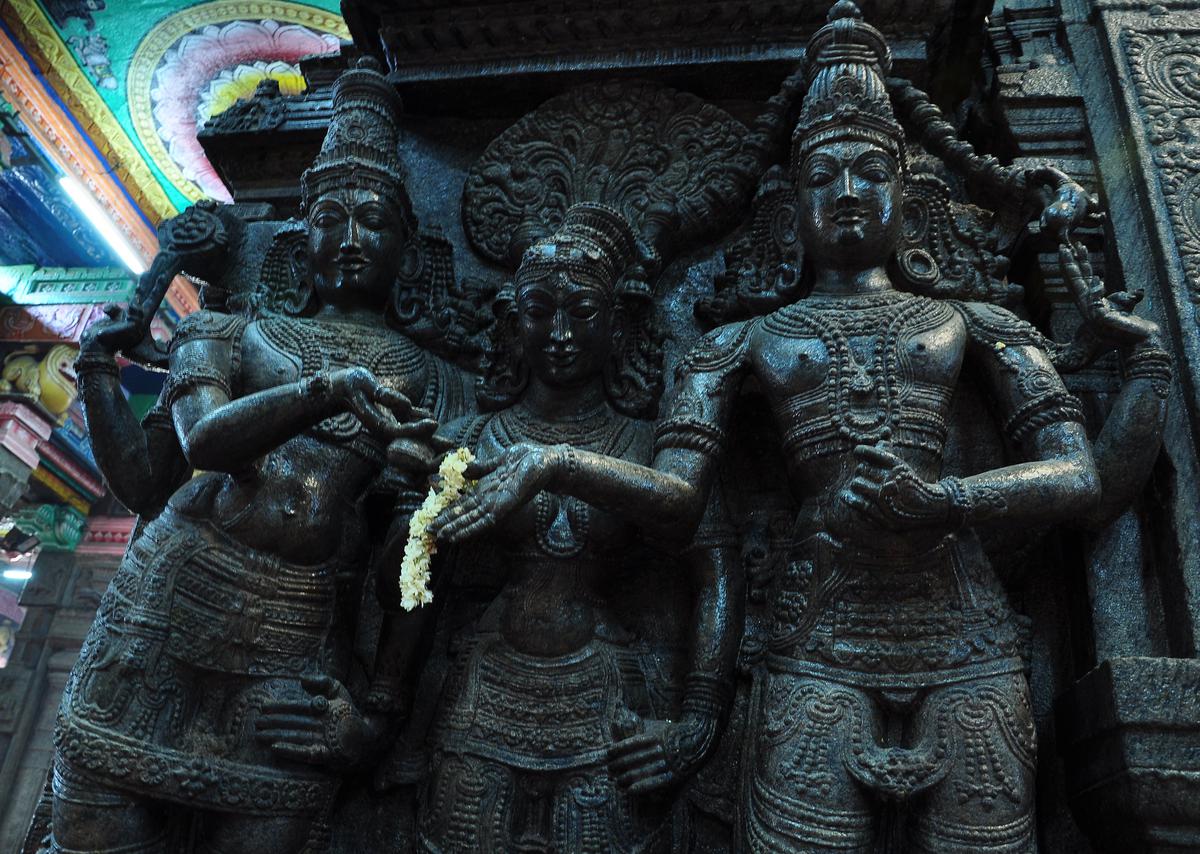 Azhagar, who reaches the Vaigai river meanwhile, is furious when he comes to know that his sister’s wedding got over without his presence. And when he prepares to leave, Meenakshi and Sundareswarar come to Vaigai river and convinces Azhagar. This event is celebrated as Kallazhagar festival, in Madurai. 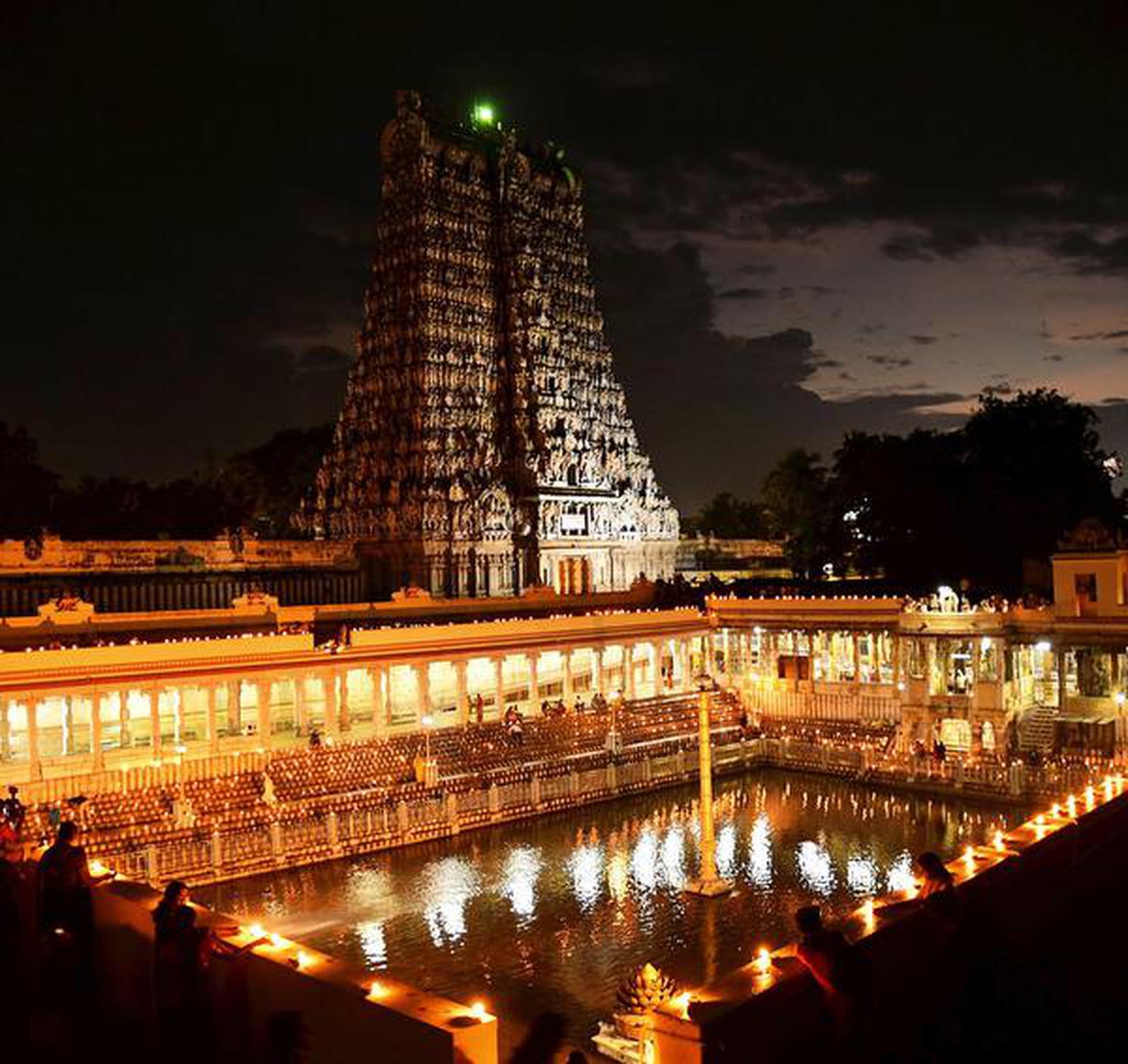 The Pottramarai kulam at Meenakshi Sundareswarar Temple, with the temple tower in the background.
| Photo Credit: G. Moorthy/The Hindu Archives

Historically, both the events — Meenakshi festival , and Azhagar festival were separate events celebrated in different months. But it was king Thirumala Nayak who moved the Meenakshi festival from the Tamil month of Maasi to Chithirai, thus naming it as ‘Chithirai Festival’. It is said that both the festivals were merged into one event to unite the people of the two Hindu sects (Saiva and Vaishnava)

Srirangam, the nithya utsava kshetram, is also hailed as the ‘Bhooloka Vaikuntam’. Through the year, from Chithirai to Panguni, special utsavams are conducted here. The Thai ther, and the Panguni ther are the other temple car festivals celebrated in this temple town. 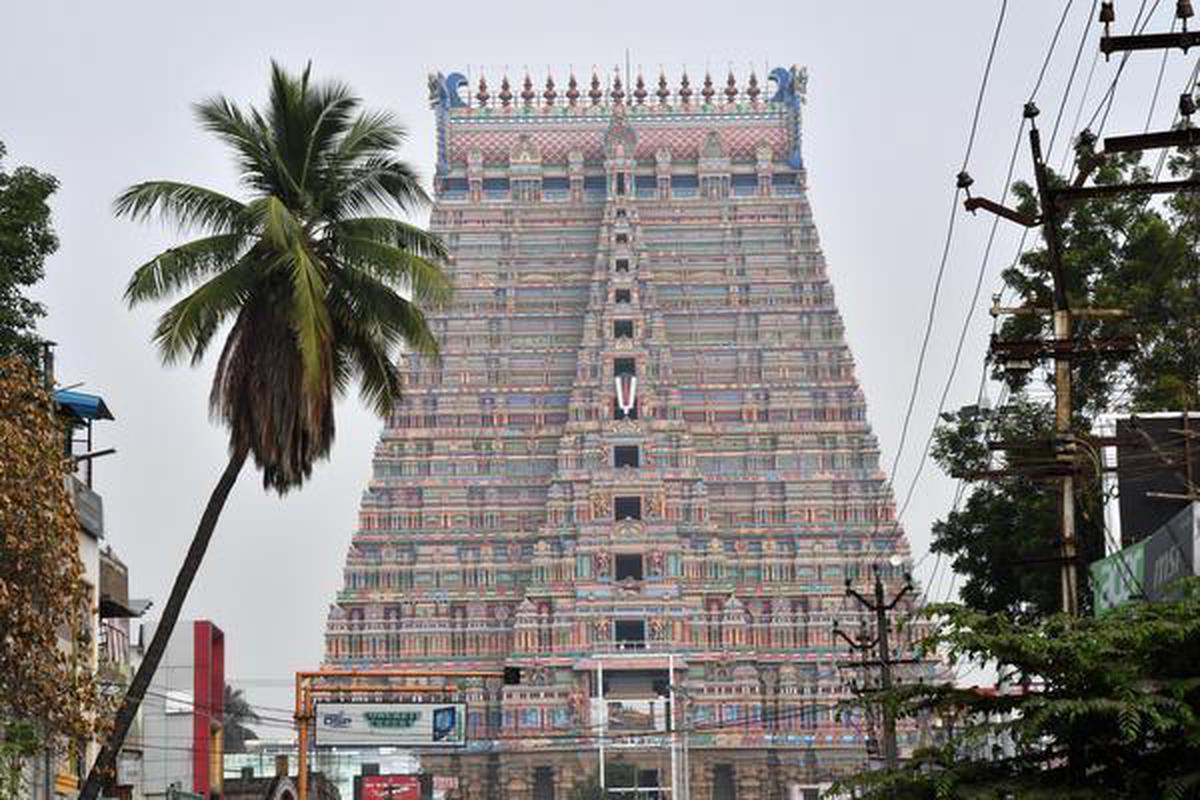 The car festival, celebrated for 11 days in the Tamil month of Chithirai, at Sri Ranganatha Swamy temple, Srirangam, is also known as Viruppan Thirunaal. A significant episode that take place during the Chithirai ther festival is that devotees of a particular community from Andhra Pradesh, who specialise in making footwear, come to Srirangam with one footwear, made for the presiding deity, to pair it with the other footwear, made at Srirangam. That the special footwear made for the deity looks perfectly coordinated, is the highlight during the Chithira ther festival. Legend has it that, the festival got its name from Viruppan Udayar, the son of Harihara II, the sangamakula king of the Vijayanagara kingdom. Between 1305 and 1371, when the Srirangam temple was invaded by the Mughal empire, the utsavar — Namperumal — had to be saved from the marauders. The idol was kept protected for more than five decades. 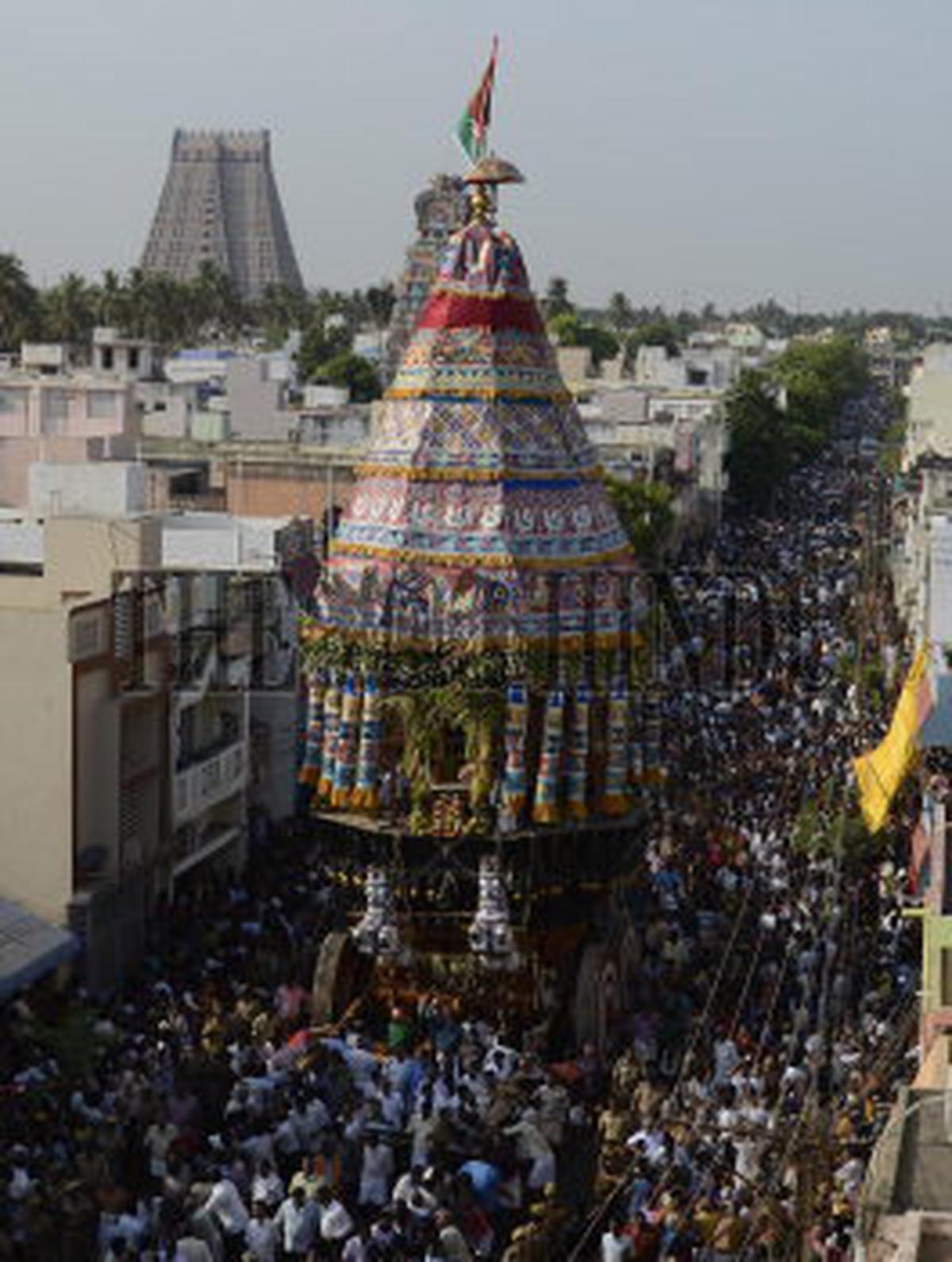 A sea of devotees pulling the chithirai ther in Srirangam, in 2016, with the rajagopuram seen in the background.
| Photo Credit: M. Moorthy/The Hindu Archives

In 1371 AD, Goppana Udayar, another chieftain of the Vijayangara empire, brought back Namperumal to Srirangam. As the temple was still in ruins, the festivals could not be held according to custom. Thanks to the munificence of Viruppana Udayar, the temple was renovated, and brahmotsavam was conducted in the month of Chithirai to commemorate the reinstallation of Namperumal in Srirangam. 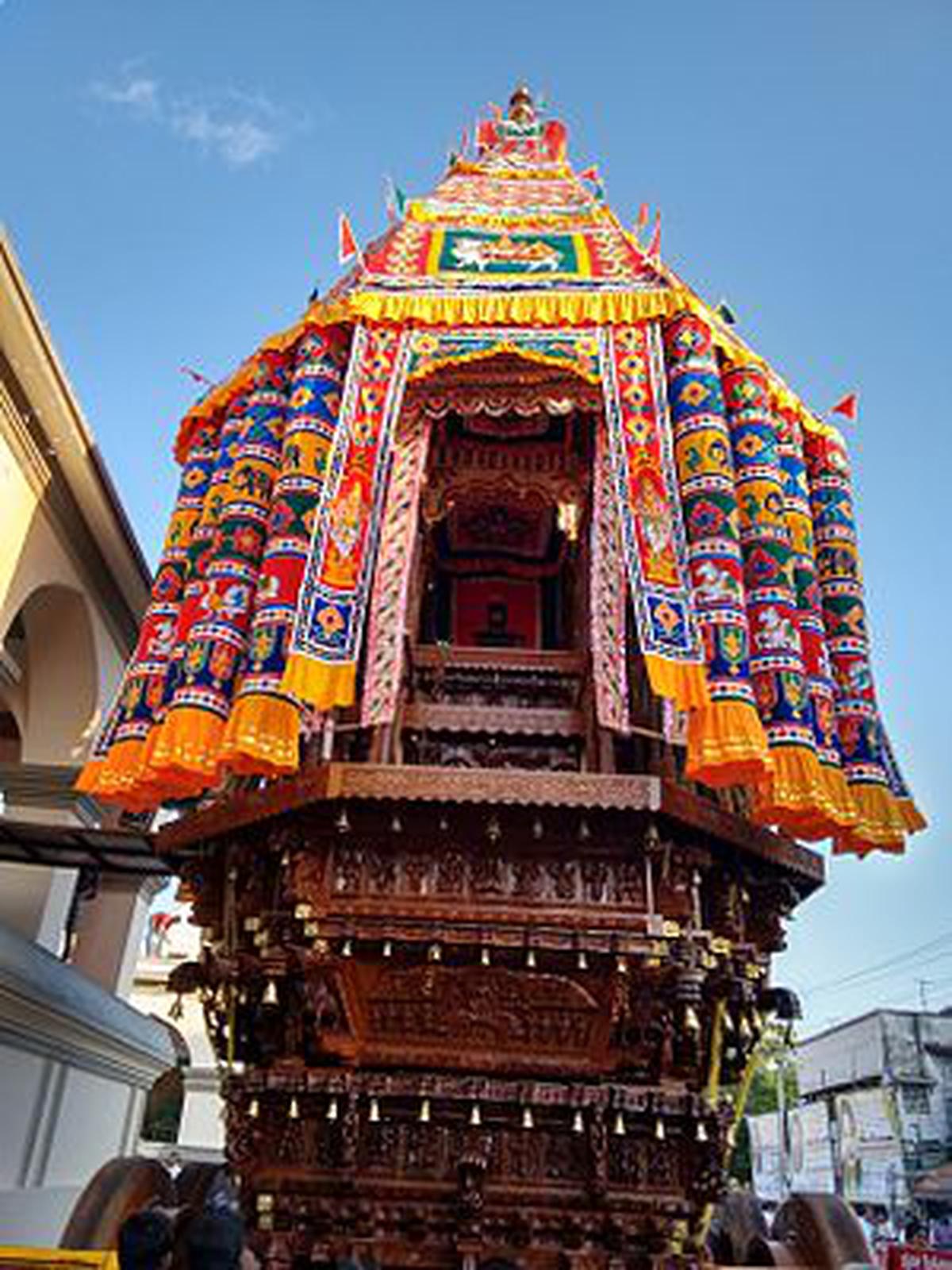 The decorated chariot of the Big Temple, Thanjavur.

The Thanjavur Chariot festival is a historical event associated with the Big Temple, Thanjavur. A sea of devotees from in and around Thanjavur will pull the temple car (Thiru Ther) of Lord Brahadeeswarar temple, popularly known as Big Temple, through the main streets.  This important temple event is part of the annual Chithirai festival celebrations. In 2015, the chariot festival was held in the Big Temple, after a gap of more than one hundred years.

During the rule of Rajaraja Chola I, the car festival was celebrated on a grand scale. Subsequent Nayak and Maratha rulers followed the tradition. Later, during the colonial period, due to paucity of funds, the car festival lost its significance. 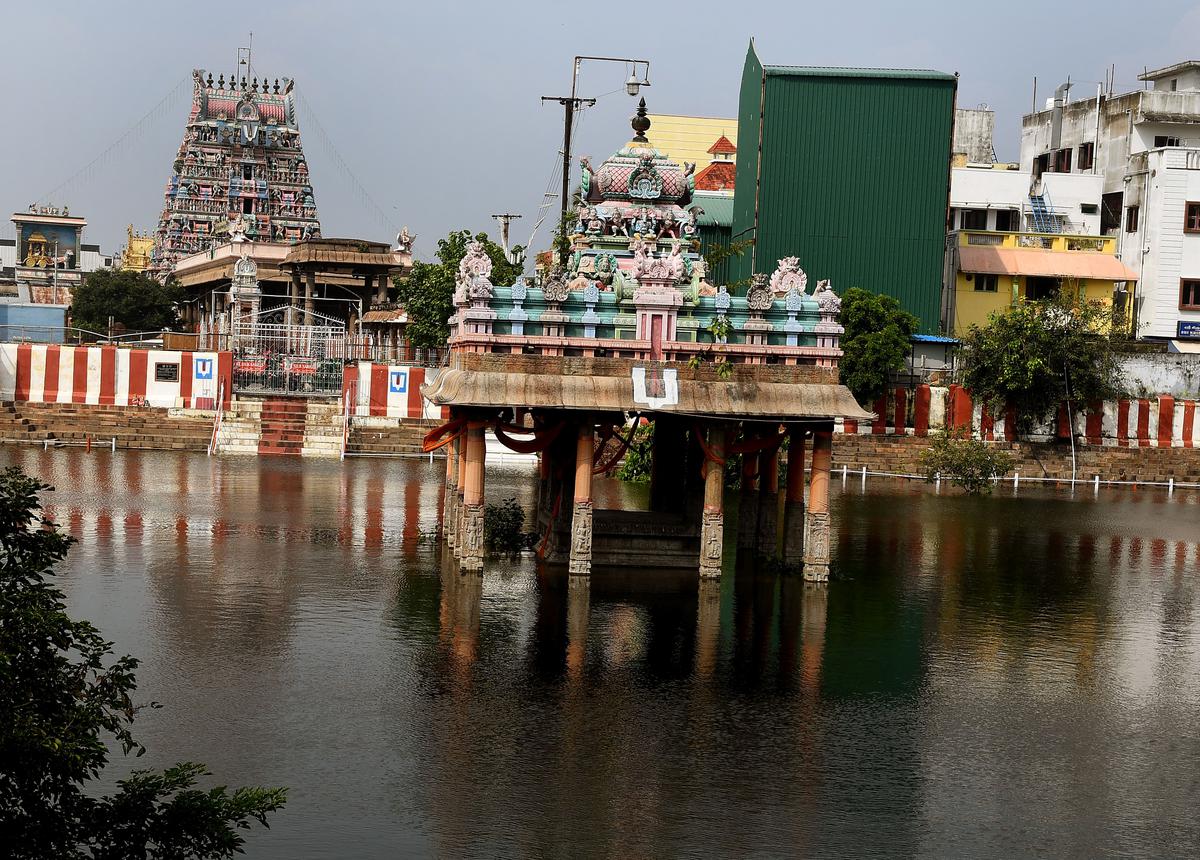 Sri Parthasarathy Swami temple, dedicated to Lord Vishnu, is said to be originally built by the Pallavas, and was later expanded by the subsequent rulers from the Chola, and Vijayanagara empires. 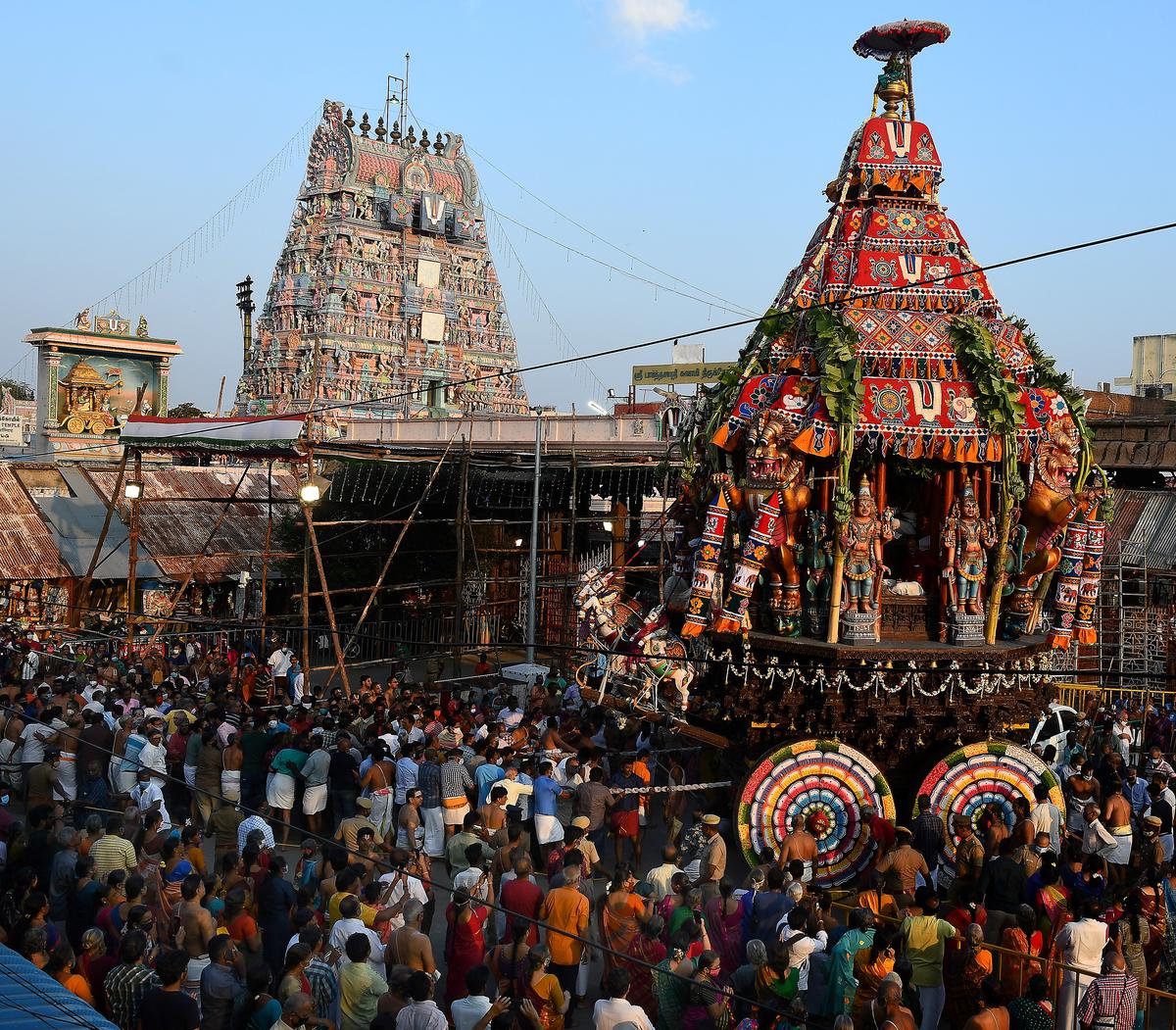 Festivals/utsavams are performed at this temple through the year. The chithirai festival is considered special as it is said that the Brahmotsavam, conducted in the Chithirai month, is performed by Lord Bhrahma himself.

The Mariamman temple, in Samayapuram, Tiruchirapalli, is an ancient temple dedicated to Goddess Kaali. As the deity is said to be made of sand and clay, abishekams are not performed for the moolavar. Among the festivals held through the year at the temple, the  Poo Choridhal, and the  ther festival are considered significant. 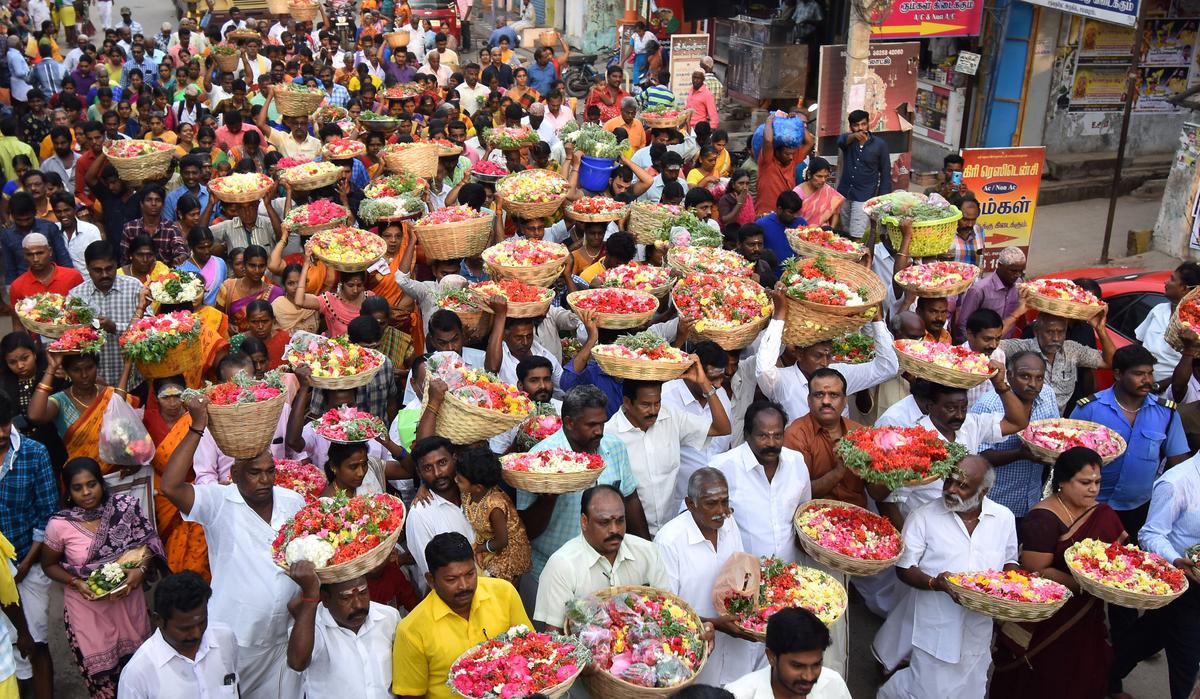 It is believed that the Goddess observes a month-long fasting from March to April, when the deity is offered only buttermilk, porridge, and fruits. The deity is adorned with colorful flowers, on every Sunday, through the month of Panguni, which is celebrated as Poo Chorithal vizha. Besides the few listed above, there are many temples, both well-known and rare, across the state, where chariot festival is celebrated with devotional fervour. And each one is unique in its own way.

Can the Eurasian Economic Union Survive Putin? – The Diplomat

Buying iPhone SE 3 at Rs 41,900? Here's why you should change your mind and check THIS compact iPhone | Technology News

Concern Grows in China Over Economic Impact of ‘Zero Covid’