Tennis star Peng Shuai has been “reappeared” in an apparent campaign by Chinese authorities to defuse and undermine the burgeoning #WhereIsPengShuai movement. Peng disappeared from the public eye after accusing a senior Party member of sexual assault on November 2. In response, supporters including Chinese feminists, the Women’s Tennis Association, and many of the world’s most famous tennis stars began speaking out in solidarity with Peng, demanding proof of her safety and freedom from detention and coercion, and an investigation into her accusations against Zhang Gaoli. On November 17, externally-facing Chinese state news outlets and their employees, along with the International Olympic Committee, began sharing evidence of Peng’s “reappearance” in response to the international pressure campaign:

Much easier to understand it if you think about a hostage appearing in a kidnapper’s hands.#metoo #HumanRights #zhanggaoli #IOC #nobeijing2022 #彭帅

The Chair of the IOC Athletes’ Commission, Emma Terho, claimed that Peng was “doing fine” and said she had offered “stay in touch at any time of her convenience.” The IOC also reported that Bach, Terho, Party member Li Lingwei, and Peng will have dinner together during the Winter Olympics. The IOC also claimed that Peng “would like to have her privacy respected at this time,” a peculiar request from a woman who risked her safety to publicly share a deeply personal story of abuse. The IOC has proven itself to be reticent on sensitive issues relating to China. Silence, or “quiet diplomacy” as the IOC calls it, works better than “jabbing them in the chest,” offered IOC official Dick Pound by way of explanation. By contrast, the IOC’s praise is fulsome. In a speech given Sunday in Dubai, IOC president Thomas Bach said the Beijing Olympics will “make history” and “change the landscape of winter sport forever”:

All elements are in place for China to deliver successful #Olympic Winter Games #Beijing2022; It will change the landscape of winter sport forever: IOC president Thomas Bach at the General Assembly Meetings of the Olympic Council of Asia, which started in #Dubai on Sunday. pic.twitter.com/WxrUEzFcq4

The IOC’s decision to participate in Beijing’s charade invited broad criticism. Yaqiu Wang of Human Rights Watch said, “The IOC has vaulted itself from silence about Beijing’s abysmal human rights record to active collaboration with Chinese authorities in undermining freedom of speech and disregarding alleged sexual assault.” Steve Simon of the WTA said the IOC’s video call, which was not released to the public, neither addressed nor alleviated their concerns about Peng, and reiterated the WTA’s call for a complete investigation into Peng’s accusation. The European Union was also unconvinced. An EU spokesperson called for “independent and verifiable proof” of Peng’s safety. MEP Reinhard Bütikofer added that Peng’s disappearance adds “another argument in favour of the diplomatic boycott of the Beijing Olympics.” Others noted that IOC president Bach had a personal relationship with the accused, Zhang Gaoli. Zhang led the steering group that supervised preparations for the 2022 Beijing Winter Olympics. Xinhua deleted reports on Zhang’s work on the Games from its website, although they remain up on the State Council’s website. 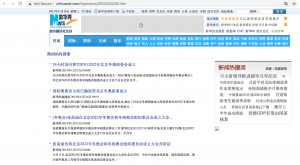 A screenshot of search results on the official website of Xinhua News Agency regarding the preparation for the 2022 Winter Beijing Olympics. The two articles referencing Zhang’s leadership role have been taken offline. 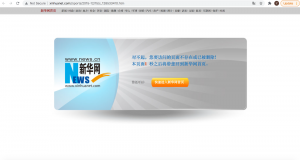 A screenshot of the now-deleted Xinhua report on Zhang’s leadership of the preparation for the 2022 Beijing Winter Olympics.

Here’s a photo of IOC president Thomas Bach meeting with Zhang Gaoli in 2016. “Zhang expressed gratitude to Bach and the IOC for giving the nod to Beijing” to host the 2022 Olympic Games. https://t.co/gRUdCyRaAd pic.twitter.com/5ODLn73ZzW

China has a long history of strategically “reappearing” people ensnared in the state security apparatus. In September, disappeared businesswoman Whitney Duan briefly resurfaced to warn her ex-husband not to publish a tell-all memoir about corruption in the highest levels of the Party. Swedish bookseller Gui Minhai went missing in Thailand in 2015. In 2016, he reappeared in China claiming to have voluntarily returned to China. Tellingly, he said he did not want “malicious media hype.” In a Tuesday press conference, Chinese ministry foreign ministry spokesperson Zhao Lijian also denounced “malicious hyping” of Peng’s situation. The English and Chinese language transcripts of the briefing excised Zhao’s answer—belying his claim that the situation is normal.

Peng is silent in all the videos. Furthermore, the offered proof of Peng’s physical well-being was seemingly designed to feminize and infantilize her. Grace Ting, assistant professor of gender studies at the University of Hong Kong told Quartz’s Mary Hui that Peng had been “rendered into this harmless, very conventionally gendered woman.” In a video released on November 21, Hu Xijin called Peng, a 35-year-old Olympian, a “girl.” He tweeted, “Can any girl fake such sunny smile under pressure?”

Within China, information about Peng is still being tightly censored. On November 21, @中网ChinaOpen posted photos of Peng Shuai attending a tennis event in China to Weibo, without mentioning her name. The comment section warned: “Over the last 30 days, four users have been blocked for malicious comments. Please comment carefully.” Some Weibo users nonetheless expressed concern and support for Peng while carefully toeing the censorship lines. A second notification under the comment section said “spam comments have been filtered” and that “some comments are temporarily withheld from display.” Some comments saved on CDT Chinese appear to have been removed:

They had to stage an appearance for her after receiving pressure from “the other side of the Wall.” Looks like she is smiling happily. In reality, the authorities wouldn’t dare to do anything to her. This is more like a protection in disguise. Now that all parties want this to go away, so be it…

Everyone is trying so hard to not mention the name. It’s very much cyberpunk. The future is here.

Can she still leave the country? [Chinese]

On November 23, new regulations issued by the Cyberspace Administration of China, the country’s internet regulator, called for a preventive warning system for posts from celebrity accounts. Eric Liu, a former Weibo censor and current CDT Chinese editor, said on Twitter that the clause was “obviously a response” to Peng Shuai’s post, which briefly slipped through Weibo’s censorship system. Li Yuan of The New York Times reported that Zhang Gaoli also cannot be overtly mentioned online—although some circumventing the ban “call him ‘kimchi’ because his given name sounds like the name of an ancient Korean dynasty.” At China Media Project, David Bandurski detailed the almost complete erasure of Peng from all media outlets and social media sites:

Has the Global Times in fact reported anything about Peng Shuai as Hu Xijin has taken to Twitter to argue that everything is fine? No. Nothing. This is clear from a search of the paper’s website over the past week.

[…] What about China’s official Xinhua News Agency? It is generally meant to lead official coverage, along with the People’s Daily, setting the standard for “public opinion guidance” and offering news releases that other media can safely run. Any reporting about Peng Shuai over the past week?

[…] So let’s select for mainland newspapers. What do we find? Once again, total silence. Not a single result is returned for the past week using the name “Peng Shuai” in the more than 300 papers available in the database. [Source]

The censorship has extended beyond the mainland. Hong Kong public broadcaster RTHK, a paragon of excellence before it was gutted after the passage of the National Security Law, deleted its coverage of Peng’s accusation. RTHK told The Hong Kong Free Press that it “will not comment on the internal editorial matters.” CNN’s broadcast in China was pulled as soon as it mentioned Peng:

State censorship in real time as I report tennis star Peng Shuai’s bizarre reappearance: “Right now, as we look at a live feed of CNN’s signal inside China, you can see that as soon as you started talking about this story, Erin, it went to color bars.” @ErinBurnett @OutFrontCNN pic.twitter.com/ySh1MYnGuf

China’s communications strategy follows a familiar playbook. Zhang Ming, a retired professor of politics at Renmin University, told Reuters’ Gabriel Crossley and Yew Lun Tian: “For some years now, China has responded to negative global attention either by giving an unconvincing explanation, or by stoically pretending the criticism isn’t there.” At The New York Times, Li Yuan described the Party’s response as a failed communication strategy:

The ruling Communist Party communicates through one-way, top-down messaging. It seems to have a hard time understanding that persuasive narratives must be backed by facts and verified by credible, independent sources.

[…] “As long as coverages about her inside and outside China are different, she’s not speaking freely,” said Rose Luqiu, an assistant professor of journalism at the Hong Kong Baptist University.

[…] If [Hu Xijin, the editor of the nationalist Global Times tabloid], China’s spin master, could speak more plainly, and if the Chinese people had the freedom to discuss Ms. Peng and her allegation, official media might understand how to build a narrative. Instead, Mr. Hu alternates between trying to change the conversation and trying to shut it down completely. [Source]

The Western “reaction to [the CCP disappearing people] has often been timid.⁣
⁣
And therefore [the CCP had] reason to believe that people would simply go along with [it]”⁣
⁣#WhereIsPengShuai⁣
⁣@MaryGao & @MareikeOhlberg pic.twitter.com/0Chl3kBhcY

Chinese feminist activists based in the country and overseas continued to challenge the state’s narrative. They demand that Peng be allowed to speak for herself and have her allegations fully investigated. On November 20, U.S.-based activist Lü Pin urged the international community to continue to speak out for Peng. “[Chinese authorities] have not loosened their control over Peng Shuai,” wrote Lü Pin, “They [kidnapped] her in order for her to ‘cooperate’ with their fabrications, which is another affront to her personal dignity.” On November 22, activists based in NYC organized rallies in support of Peng:

Just days after Peng Shuai came forward with her accusations, a group of Chinese feminists created an online message board to gather support for her. Anonymous users left hundreds of messages in a matter of hours. CDT has selected a few messages and translated them below:

I’m sorry for not being able to speak up for you on China’s web space. I sincerely hope that you are ok. Thank you for your bravery, and for your vulnerability. Thank you for coming forward. You are not fighting this alone.

You are neither a bad girl nor sanctimonious. You are just the same woman I saw on the tennis court, brave and strong. I hope you are safe, in good health, and take good care of yourself. You have many people’s support. Hang in there! Hope I still get to see you play🎾

A woman’s courage will never be forgotten. Power may erase records from the surface, but our memories stay with us. Come on, Beibei [Peng Shuai’s nickname]. [Chinese]

“In China, extremely few people dare to challenge a senior politician in such a personal way,” Lijia Zhang, a London-based writer and feminist from China, told the New Statesman. “Of course, they saw Peng’s claim as a threat.”

[…] Yet many remain unconvinced. “The video makes things seem even more suspicious,” Li Maizi, a prominent Chinese feminist activist, told the New Statesman from Beijing. “I think everyone should be concerned about her safety. We need to keep paying attention to her case.”

[…] For Li, Peng’s case is significant because it proves that #MeToo exists on every level of society in China. “It has the capability to shake up and transform things that regular people, through regular channels, would normally never even be able to touch,” she said. [Source]