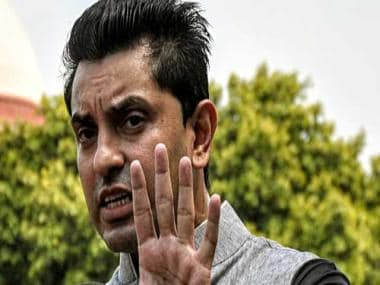 Political analyst Tehseen Poonawalla on Thursday took to Twitter to question why his complaint with Delhi Police against cleric Ilyas Sharafuddin for “instigating communal hate and spreading violence on a national television channel” has not been converted into an FIR.

The political analyst further asked if Delhi Police thought “Ilyas Sharafuddin was above the law.”

Dear @CPDelhi, is Mr Ilyas Sharafuddin above the law? My complaint against his vulgar comments have been filed online with @DelhiPolice .
Why is the complaint not yet converted to an FIR? If you find it difficult to act – kindly acknowledge the same or do the needful!
Jai Hind pic.twitter.com/whek9vFScs

Poonwalla on 8 June had filed a complaint with the Delhi Police, alleging that Ilyas Sharafuddin, who was invited to a recent debate show on a national TV news channel, joined the panelist “with intention of mocking a religious faith and instigating violence.”

He further said that the Islamic cleric joined the debate to “disturb social and communal harmony of the country.”

“He (Ilyas Sharafuddin) made baseless remarks on the Indian culture and the further made communal comments, sexist and racist statements against a particular religious community,” Poonawalla said.

Poonawalla added that the remarks and comments by Ilyas Sharafuddin during a debate could further encourage “disharmony and hate” within the society.

Poonawalla also shared a clip where Ilyas Sharafuddin can be heard commenting on the Indian culture and mocking religious faith.

During the debate, Ilyas Sharafuddin can be heard comparing the Shivling to a male body part and said that the Hindu community has a habit of worshiping the idol and male private organ.

Poonawalla through his letter addressed to Delhi Police Commissioner Rakesh Asthana requested the police to register a complaint under IPC sections 153 A, 153 B (promoting enmity between different groups on grounds of religion, race, place of birth, residence), 295A (deliberate and malicious acts, intended to outrage religious feelings of any class by insulting its religion or religious beliefs), 298 (uttering words, etc, with deliberate intent to wound the religious feelings of any person).

Poonwalla also requested the Delhi Police to register case against Ilyas Sharafuddin under IPC sections 505 (to commit an offence related to any place of worship or in an assembly engaged in the performance of (religious worship or religious ceremonies), 506 (criminal intimidation), 507 (criminal intimidation by an anonymous communication) and 509 (word, gesture or act intended to insult the modesty of a woman).

Ringing in a Season of Culture