Gujarat Anti-terrorism Squad team detained Setalvad on Saturday from Mumbai in connection with a case on her NGO, which gave baseless information about the 2002 Gujarat riots to the police 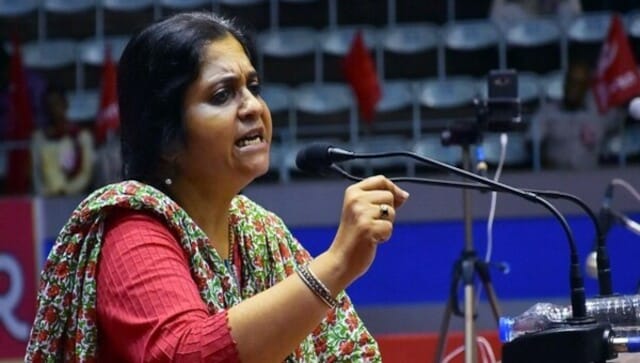 Teesta Setalvad, who was produced before the court on Sunday in connection with a case against her NGO, which gave baseless information about the 2002 Gujarat riots to the police, alleged that her arrest was illegal and she was driven from Mumbai to Ahmedabad in a car to intimidate a “human rights lawyer”.

She called her arrest an “abuse of power” alleging that she was not allowed to speak to her lawyer.
She was making her statements in the metropolitan court of Ahmedabad where she was produced by the Gujarat police crime branch.

“The ATS barged into my house without any warrant, snatched my phone and pushed me. Look at this wound they inflicted on me. They brought me to Ahmedabad Crime Branch at 6 am,” she said in the court.

“They came in at three and it was only after my lawyer came that they showed me an FIR. Is arresting on the basis of an FIR legal? Why wasn’t I served a notice? I was detained illegally from 3 pm to 10.30 am. Why was I driven down in a car by ATS from Mumbai to Gujarat? To intimidate me? To intimidate human rights lawyers is okay? This is an abuse of power. My detention and arrest is illegal,” Setalvad alleged.

Alleging “fear for life”, she questioned why ATS was sent for arresting her in an alleged forgery case.
“I fear for my life. I have been roughed up, and abused…why should ATS be sent for what is a forgery case? Is this the new norm? I should be given bail. I am a human rights activist. This is a political case. I am cooperating and will cooperate with all legal investigations and queries,” Setalvad said.

“Former IPS officer RB Sreekumar was arrested yesterday and Teesta Setalvad was arrested today. Forging of evidence and hindering of evidence will be looked into. We will produce both the accused in the court by 3 pm,” Deputy Commissioner of Police (DCP) Chaitanya Mandlik said earlier on Sunday.

“The accused are not supporting us in the investigation. We are demanding 14 days of custody. Teesta will be produced in front of the Magistrate and all her statements will be recorded there. We are getting the documents arranged from various sources,” said the DCP.

“We have done the medical check-up, and the due process was followed by the Crime Branch. The investigation is at a primary level, strict actions will be taken once the investigation is done. We have the primary affidavits and documents submitted by accused,” he added.

Earlier in the day, Setalvad was taken for a medical checkup at Civil Hospital in Ahmedabad.
“They have done my medical. I have a big bruise on my hand. This is what the ATS did to me. They are taking me to the magistrate’s court,” said Teesta Setalvad had said after the medical checkup.

Meanwhile, the Left parties have strongly opposed the arrest of Setelvad. The CPI(M) has alleged that the move is “abhorrent” to democratic rights of citizens.

In a statement, the CPI(M) alleged that Setalvad’s arrest is an “ominous threat” to all democratic minded citizens not to dare to question the role of the State or the government under whose regime communal violence takes place.

“This is abhorrent to democratic rights of citizens. However, the action of the Gujarat administration in her arrest has been enabled by the questionable verdict of the three-member Bench of the Supreme Court which has made the complainant into the accused…,” the statement said.

On Saturday, Gujarat Anti-terrorism Squad (ATS) team detained Setalvad from Mumbai in connection with a case on her NGO and later in the night she was taken to Ahmedabad.
The Gujarat ATS team took Teesta Setalvad to the Santacruz police station on Saturday.

The action came after Union Minister Amit Shah in an interview with ANI said that Teesta Setalvad-run NGO gave baseless information about the 2002 Gujarat riots to the police.

“I have read the judgement very carefully. The judgement clearly mentions the name of Teesta Setalvad. The NGO that was run being run by her – I don’t remember the name of the NGO- had given baseless information about the riots to the police,” Amit Shah, in an exclusive interview, told ANI.

The Supreme Court had on Friday, dismissed as “devoid of merit” an appeal by Zakia Jafri in a plea challenging SIT’s clean chit to the then chief minister of Gujarat, Narendra Modi and others in cases related to the riots. Zakia Jafri is the widow of former Congress MP Ehsan Jafri who was killed in the riots.

Firstpost Podcast: What is the Zakia Jafri case?

Hitting the Books: Why lawyers will be essential to tomorrow's orbital economy