The department has issued red alert for eight districts — Chennai, Tiruvallur, Ranipet, Vellore, Salem, Kallakurichi, Tirupattur and Tiruvannamalai — on Thursday as extremely heavy rainfall measuring above 20.4 cm is expected in one or two places and very heavy to heavy rainfall in a few places.

Rain may be of heavy to very heavy intensity over 11 districts including Kancheepuram, Chengalpattu, Cuddalore, Dharmapuri and the UnionTerritory of Puducherry. Many other places may record rainfall of varying intensity.

Here are the latest updates:

The Southern Railway on Thursday temporarily suspended suburban train services on the west section from Mooremarket complex to Avadi, Thiruvallur and beyond due to water logging in tracks.

A senior official of the Chennai division said the water stagnation in the tracks in Ambattur and Avadi railway stations has led to temporary suspension of suburban train services. The railway maintenance staff are engaged in draining out the water.

However suburban train services on the other three sections are operated in reduced numbers as per Sunday schedule. 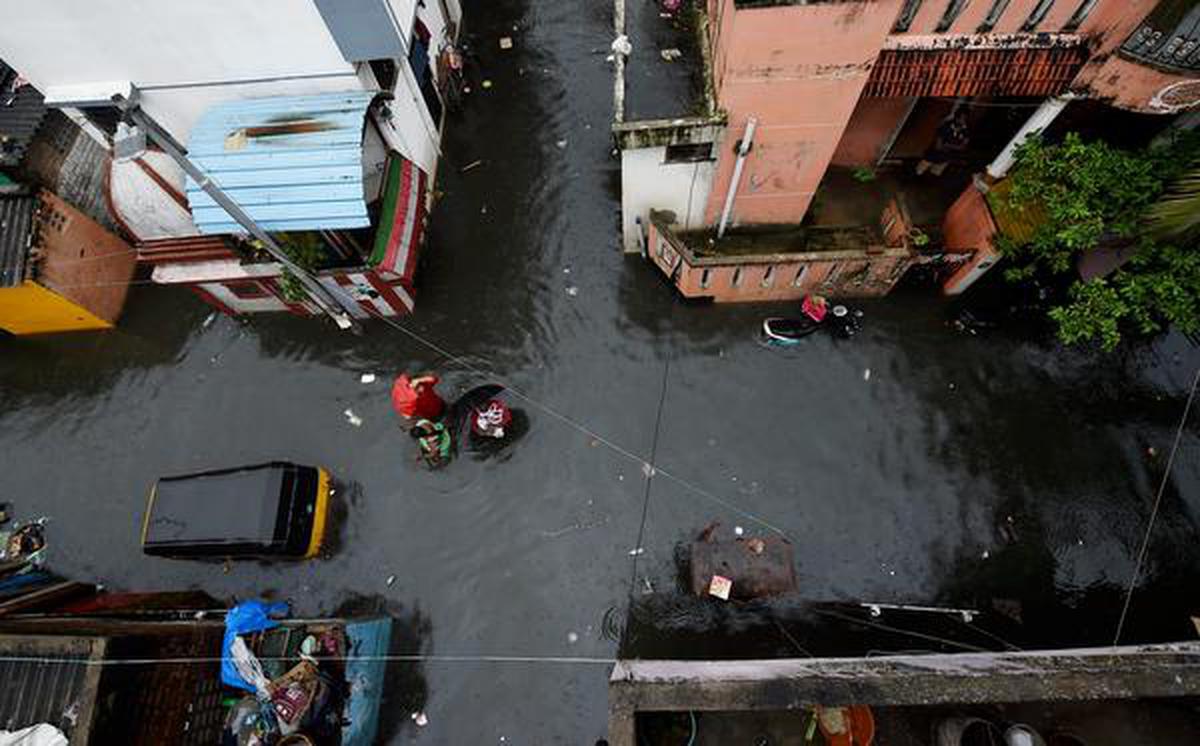 People wade through a waterlogged street following heavy rain at KM Garden in Purasaiwakkam, in Chennai.

According the the IMD, the epression is now over southwest Bay of Bengal, about 170 km east-southeast of Chennai and 170 km east of Puducherry.

It will continue to move west-northwestwards and cross north Tamil Nadu and adjoining south Andhra Pradesh coasts around Chennai by Thursday evening, the IMD has said. — K. Lakshmi

The heavy overnight rain has led to several areas in south Chennai going without power supply due to cable fault, feeder trappings and shutting down as part of precautionary measures.

A senior official of Tangedco said power has been disrupted in several portions of Pallavaram, Eechangadu, Pammal, Vengaivasal, Sithalapakkam, Thoraipakkam and Selaiyur, due to tripping of feeders in the substations. Also the tripping in the main feeder from the Perungudi substation has caused power cut in areas served under the Information Technology corridor.

Intense rains pound  several areas in and around Chennai

Severe rainfall pounded several parts of the city and its neighbourhood on early hours of Thursday, Novembe 11, 2021, as depression over southwest Bay of Bengal moved towards TN coast.

According to IMD, the depression moved with a speed of 27 km per hour and was about 300 km east-southeast of Chennai and 280 km east-southeast of Puducherry. It is very likely to continue to move west-northwestwards and cross north Tamil Nadu and adjoining south Andhra Pradesh coasts between Karaikal and Sriharikota close to the north of Puducherry by Thursday evening.

Rains were more concentrated over Chennai and neighbouring districts as districts like Cuddalore and Tiruvannamalai recorded light to moderate rains.

The Meteorological department has said surface winds will be strong with wind speed around 40 with gusting to 45 kilometres per hour over Chennai, Kancheepuram, Tiruvallur and Chengalpattu districts of Tamilnadu and Puducheery during next six hours under the influence of Depression over South west Bay of Bengal off North TN coast.

The Chennai City traffic police on Thursday have issued the list of subways closed due to waterlogging and the subsequent diversions. According to a release, Vyasarpadi, Ganeshapuram, Gangu Reddy, Madley, Duraiswamy , Palavanthangal, Tambaram, Aranganathan, Villivakkam, and the Kakkan Bridge subways have been closed.

Buses have been diverted to Perambur Barracks Road near Astapujam Road due to road damage. MTC Buses from Doveton towards Pulianthope is diverted at  Doveton to take the route via Bricklin Road, Strahans Road and  proceed further. Similarly Buses from Pulianthope towards Doveton diverted via Strahans Road, Bricklin Road, Purasaiwakkam High  Road and to proceed further. — Sivaraman

The district administrations of Vellore, Villupuram, Ranipet, and Kanniyakumari have declared holiday for all schools and colleges in the districts on November 11, due to rain. Similarly, holiday has been declared for schools in Tiruvannamalai and Tirupattur by the respective Collectors today. — Our Correspondents

As the city gears up for a week of torrential downpour, Tamil Nadu’s lively network of weather bloggers have sprung into action on social media, keeping people updated with chatty forecasts 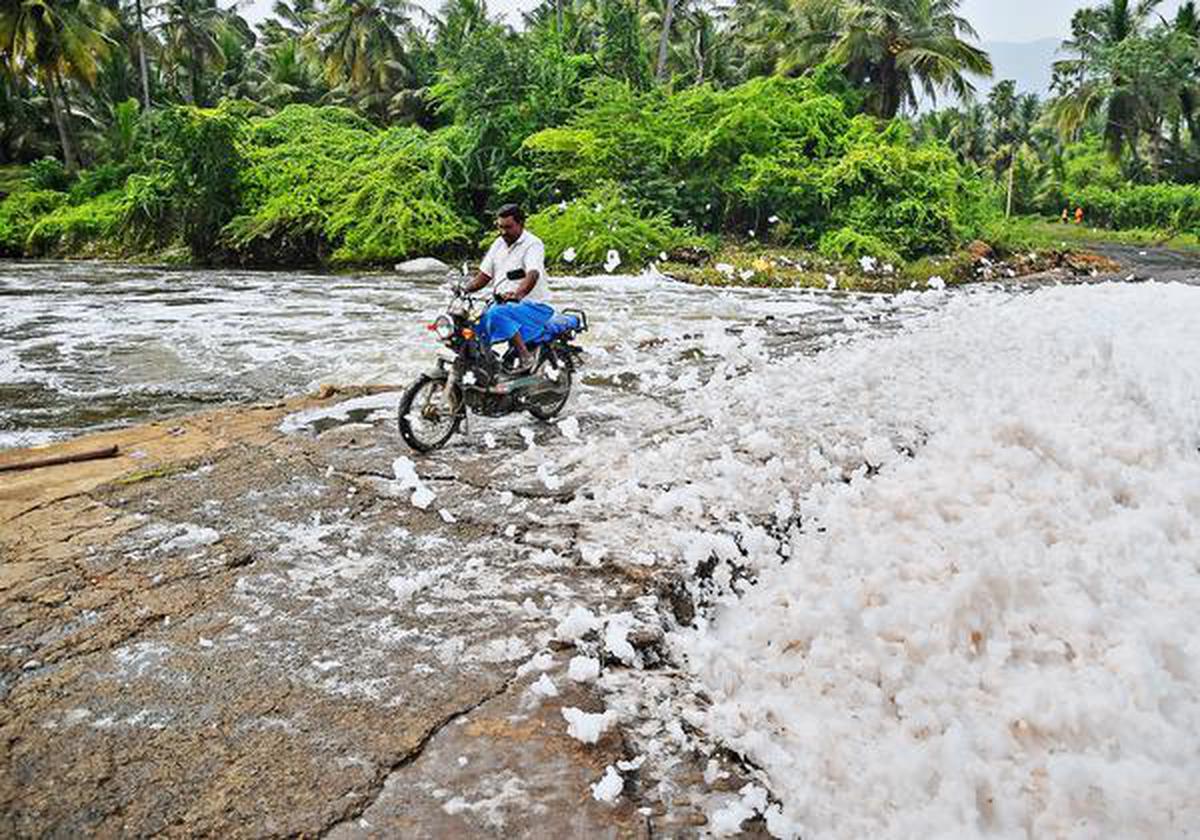 Toxic froth floating on the surface of the River Thirumanimutharu following the recent rain at Poolavari in Salem on Wednesday.

Chennai and other northern and delta districts are bracing for heavy rainfall, owing to the well-marked low-pressure area, expected to turn into a depression and cross the region on November 11. While earlier forecasts predicted rain to intensify in Chennai from November 10, the city received only moderate rainfall throughout the day.

However, rainfall appeared to intensify from November 10 evening, with Nungambakkam recording 3 c.m. in five hours from 5 p.m.

Eight flights were cancelled at Chennai airport on Wednesday after the Indian Meteorological Department issued a forecast that there would be heavy rainfall in the city. Some of the international flights for Thursday have been cancelled and some rescheduled as well.

Teams from the National Disaster Response Force have reached Puducherry and Cuddalore to assist the civil administration in case of any monsoon-related disaster.

The Puducherry region recorded 95 mm of rainfall till 8.30 a.m on November 10. While Thirukannur received 75 mm rain during the period, Bahour region received 72 mm.

As the heavy rainfall continued to disrupt the normal life of the people and submerged the standing samba crop in different parts of the delta districts including Tiruchi, Nagapattinam and Thanjavur districts, the Monitoring Officers appointed by the State government to supervise the disaster management relief works carried out inspection at various points to take stock of the situation.

Earlier this year, we saw them behind screens and on the ground — distributing food, collating information, relaying leads, finding beds and oxygen cylinders, and thus saving lives — in the thick of the brutal second wave of COVID-19 in Chennai, braving personal losses and mental health challenges. Now, as the city wades through heavy rains, they are on the job again, with all systems in place. Chennai’s volunteers are adapting through crises, armed with an expertise that can only come from experience.

It was only earlier this week that Instagram and Twitter handle @covid19_chennai changed its name to @newsofchennai, thereby shifting its focus to critical situations in the city, not just COVID-19. When Shyam Sundar, a Chennai-based volunteer started the account in March 2020, he did not anticipate this growth in relevance. In fact, he had hoped the pages would no longer be required.

(With inputs from Our Correspondents, agencies)