IAF’s Sukhoi Su-30MKI is set to get X-Guard Fibre optic super sonic decoy system. This system helps to evade Air to Air, Surface to Air Missiles as per media reports. 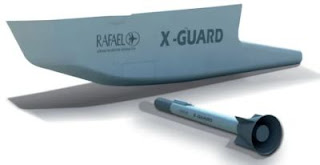 First, let us understand the term “Decoy”. Decoy means a thing that intends to attract someone by deceiving them. So basically Decoys on fighter aircraft work in a way, that they will attract the incoming threat and deceive it towards themselves. And here the term “towed” means “to pull someone/something behind one object. So, basically towed decoys are such that they are pulled along with the aircraft and that decoy will be part of the EW suits of aircraft.

This countermeasure basically for the RF-guided missiles i.e. Radar Guided missiles.  It works together with the aircraft’s electronic warfare system to provide radar jamming. In addition, it can also be used in a backup mode as a signal repeater, which allows it to lure incoming missiles away from their actual target.

Normal EW suits cannot protect from Missiles equipped with Monopulse Radar and LORO (Lobe-On-Receive-Only) Radars. These decoys are specially made for the same that can decoy and jam other radars along with especially these two. It can be used multiple times and also can be retracted. Also, it is not on the hardpoint, it added by additional pylon on the wings. It can fly along with aircraft up to a speed of 1.6 Mach and can withstand the forces and acceleration of 9G. Due to this, it can also be easily used when the jet is cruising at supersonic speed. The connection is basically with optic fibre so the power supply is always high.

This technology for the Su-30s would be very helpful against incoming missiles of China and Pakistan. As of now it even seems to beat the PL-15 missiles. And after saving itself, Su-30MKIs can now take down enemy JF-17 or J-20 using its current set of BVR missiles. It can also target enemy radar and electro-optical systems using precision-guided ammunition and anti-radiation missile.

Since the system is linked to the aircraft’s defensive avionics and EW system through a fibre-optic cable. It operates over a wide frequency range, to counter various types of radars and missiles. The decoy is retrievable and can be deployed several times during a mission. The fibre-optic connection to the aircraft allows accurate jamming.

Will Use Indian Army Hotline To Communicate With China In Case of Air Space Violation: Air Chief Chaudhari

Evaluation and Issues – The Diplomat

Xi Jinping by Stefan Aust and Adrian Geiges; China After Mao by Frank Dikötter review – power and how to keep it | Biography books