‘Special day in my life,’ says Modi as 31May, 2022 marks longest stint without Congress government in independent India-Opinion News , Firstpost

Prior to BJP’s current tenure, the longest stint without a Congress government, was the period between the governments of PV Narasimha Rao and Manmohan Singh. However, that period saw three prime ministers, while this period had only one, PM Modi 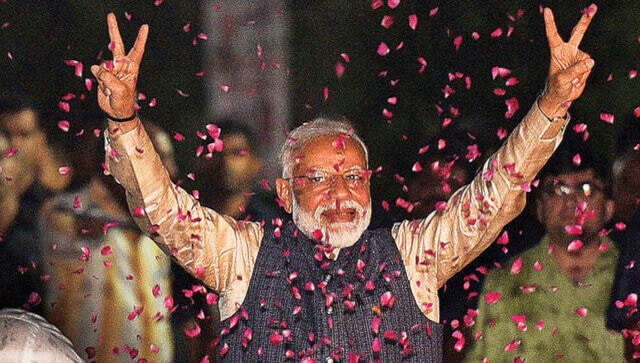 Prime Minister Narendra Modi at BJP headquarters in New Delhi after returning to power in the 2019 General Election, 23 May, 2019. AP

Not many realise the significance of 31st May 2022. However, when it comes to Indian politics, the date’s significance cannot be stressed enough. It is on this date that the current tenure of the BJP becomes independent India’s longest stint without a Congress government at the helm of affairs. Prior to BJP’s current tenure, the longest stint without a Congress government ruling India, was the period between the governments of PV Narasimha Rao and Manmohan Singh. That period (17th May 1996 to 21st May 2004) lasted for 2927 days. For Narendra Modi, who took over as Prime Minister on 26th May 2014, 31st May 2022 will be the 2928th day in office.

The BJP’s current tenure differs in many ways from the previous record-holding period. The most visible difference is that the period saw three prime ministers- Atal Bihari Vajpayee, HD Deve Gowda and IK Gujral. The period began with Vajpayee’s thirteen-day stint as Prime Minister, which came to an abrupt end when he was unable to prove his majority. This was followed by Gowda and Gujral’s prime ministerial stints, which lasted for less than a year each. Both Gowda and Gujral were propped up by the Congress Party, which had extended outside support to keep the BJP out of power. In the ensuing elections, after Congress pulled the plug on Gujral’s government, Vajpayee was able to return as Prime Minister by cobbling up a post-poll coalition. However, his government too collapsed in a year, and he was forced to face the electorate again. This time, the BJP’s pre-poll coalition nearly made it past the halfway mark on its own. The coalition government with Vajpayee at the helm lasted its complete term.

Other than the current period having only one Prime Minister, it is also striking that the BJP has won simple majorities in both the 2014 and the 2019 general elections. Both iterations of the Modi government have included ministers belonging to pre-poll alliance partners, but in terms of the seat tally, the BJP has attained and maintained a parliamentary majority on its own. As many analysts had noted in 2014, the Modi-led BJP was the first party to attain a parliamentary majority after the Rajiv Gandhi-led Congress in 1985, putting an end to the ‘coalition era’ and the phenomenon of outside support, which lasted almost three decades. The alternative to a Congress government this time is not an expedient and inelegant amalgamation of random political entities, but a pan-India party with a decisive mandate. What is more, the mandate will last for two more years at least.

Since 2014, the BJP has only grown in strength, establishing itself in different parts of the country. Derogatorily referred to as a cow-belt party or a brahmin-bania party in the past, it continues to break new ground both regionally and socially. Since 2014, other than its traditional fortresses, the party has become the go-to political option in Haryana, Maharashtra and the Northeast. It has made substantial inroads in Bengal, Odisha and Telangana as well. Socially, it has become the go-to party for many communities, especially the OBCs, largely due to the efficient delivery of welfare and the equally efficient mobilization of beneficiaries. According to many observers, it is on the path to creating a united Hindu voting block. In many parts of the country, it has built an organization that is often described as an election-winning machine. Notably, though, the party has been more or less immune to anti-incumbency. Despite the brutal second wave of the pandemic and its many repercussions, the party was able to bounce back within a year, receiving historic mandates in Uttar Pradesh, Uttarakhand, Goa and Manipur. The opposition meanwhile remains divided and depleted.

The condition of the Congress Party, which is still widely considered the principal opposition party, is pertinent in the context of the longest non-Congress stints. Since 2014, the Congress Party has been unable to cross the sixty-seat threshold in the Lok Sabha. Prior to 2014, its tally had never dipped below the three-digit mark. Today, the party has been wiped out in most regions of the country. It has only two state governments, and both will have to face the electorate before the 2024 general elections. Other than in the Northeastern states which were the party’s last reliable fortresses, no other Congress state government has been re-elected since 2009. The Congress is the only opposition party that is considered to have a pan-India presence at the organizational level, but it faces a very realistic prospect of going into the next general elections without a single state government under its belt.

Much like how the 2009 elections were the last time the Congress Party crossed the triple-digit threshold in parliament, the year 1985 was the last time the Congress Party won a simple majority in parliament. It was never able to replicate it thereafter. Interestingly, both the Congress governments before and after the Vajpayee-Gowda-Gujral period, those of Narasimha Rao and Manmohan Singh, were coalition governments. Essentially then, independent India’s political history can be divided into three phases. The first, from independence to 1985, was mostly dominated by the Congress Party. The second, from 1985 to 2014, with coalition governments, mostly headed by the Congress or the BJP. And the third from 2014 onwards, wherein the BJP has established itself as the dominant force. It is a story of inverse proportion. What the 31st of May 2022 signifies is that India has found a new natural party of government.​

Ajit Datta is an author and political commentator. He has authored the book, ‘Himanta Biswa Sarma: From Boy Wonder to CM’. The views expressed in this article are those of the author and do not represent the stand of this publication.