Sequel to The Battle at Lake Changjin in the works 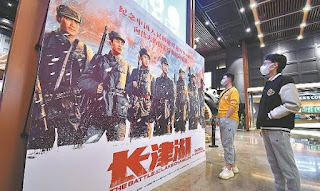 (Xinhua) Chinese blockbuster The Battle at Lake Changjin is set to have a sequel, Water Gate Bridge, in which stars Wu Jing, Yi Yangqianxi and other principal members of the original cast will return.

The announcement came on Oct 28 via the movie’s account on Sina Weibo, making headlines and generated more than 250,000 reposts within four hours of the post.
The new film, also co-produced by Bona Film Group and August First Film Studio, has the same directors as the original－Chen Kaige, Hark Tsui and Dante Lam. Its release date is yet to be announced.
The sequel continues the story of Chinese People’s Volunteers army fighting bravely in freezing temperatures in a key campaign near Lake Changjin, or Chosin Reservoir, during the War to Resist US Aggression and Aid Korea (1950-53). It follows the Chinese soldiers of the same company taking on a new task, and this time their battlefield is a crucial bridge on the retreat route of American troops.
The Battle at Lake Changjin that hit Chinese theaters on Sept 30, has moved many moviegoers to tears. It tells of how the young soldiers were willing to risk it all to defend their motherland from the world’s best-equipped army, despite the lack of food and warm clothing and amid bitter cold.
Raking in a whopping total of over 5.37 billion yuan (about $840 million) in 29 days, the war epic is this year’s second-biggest earner so far, both in China and globally. It only trails domestic comedy Hi, Mom, which has raked in 5.41 billion yuan, according to Chinese e-ticketing platform Maoyan.
The war film is currently the third highest-grossing title of all time in China. Maoyan predicts the film will complete its run with 5.5 billion yuan.
Source: Xinhua | Updated: 2021-11-03 08:12

9th edition of The Hindu & Saregama M.S. Subbulakshmi Award is back

‘Luoyang’ to debut on iQiyi worldwide

covaxin: Covaxin gets WHO approval for emergency use listing