Actor Akshay Kumar and debutant Manushi Chillar are in Varanasi for the promotions of their upcoming film ‘Samrat Prithviraj’. They are accompanied by director film’s director Chandraprakash Diwedi. On Monday afternoon, Akshay took to Instagram and expressed his excitement about being at the spiritual place. “Samrat Prithviraj ki team aaj aa phuchi hai bhagwan Vishwanath ji ki nagri, varanasi mein,” he wrote. Also, Akshay Kumar took a holy dip in the river Ganga and attended the aarti with his team. 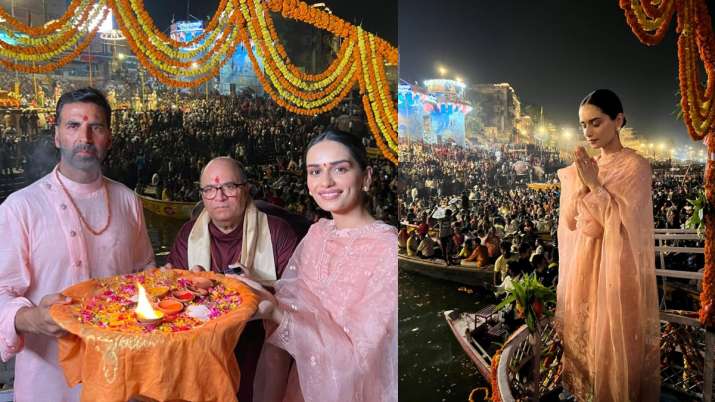 Earlier in the day, Akshay dropped a picture with Manushi from the airport. In the image, he is seen dressed in denim tracksuit. On the other hand, Manushi opted for a lavender ethnic suit. ALSO READ: TKSS: Akshay Kumar praises Prithviraj co-star Manushi Chhillar, says she has a sharp memory

Akshay Kumar is all set to enthral the fans with his historical film Samrat Prithviraj, co-starring Manushi Chillar, Sanjay Dutt and Sonu Sood. Earlier, the film was titled ‘Prithviraj’ but was later changed to ‘Samrat Prithviraj’, according to a letter issued by Yash Raj Films. The move comes after a Public Interest Litigation (PIL) by Shree Rajput Karni Sena, through Advocate Raghavendra Mehrotra. Union Home Minister Amit Shah to watch Akshay Kumar-starrer ‘Prithviraj’ at special screening

Recently, Akshay Kumar unveiled the first song from his upcoming film titled ‘Hari Har’ on the Internet and he claims it to be one of the most patriotic songs that he has heard in his entire acting career. The actor took to his Instagram handle and shared, “A saga of valor and bravery. Experience the power of Samrat Prithviraj Chauhan in #HariHar song. Releasing in Hindi, Tamil and Telugu. Celebrate Samrat #Prithviraj Chauhan with #YRF50 only at a theatre near you on 3rd June.”

The film, which has been produced by Yash Raj Films, has Chhillar playing the role of Prithviraj’s beloved Sanyogita and her launch is definitely one of the most awaited debuts of 2022. The film is set to release in Hindi, Tamil and Telugu.