Some parts of Delhi are likely to see intermittent thunder activity over the next few days which will keep the mercury in check, said Mahesh Palawat, vice president of Skymet Weather 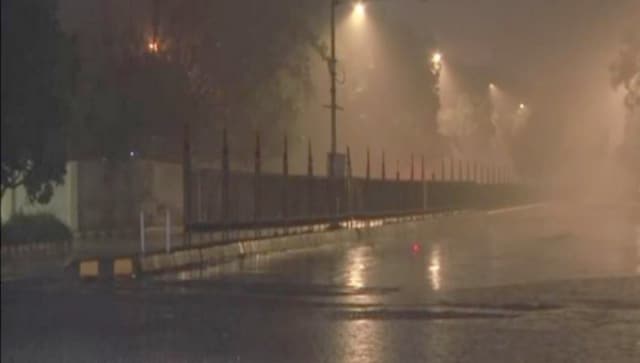 This is the first storm of “severe” intensity in Delhi since 9 June, 2018, when Palam had logged a wind speed of 104 kmph, a Met department official said. A moderate thunderstorm had hit the city last Monday.

The thunderstorm led to a drastic fall in the Temperature

The India Meteorological Department (IMD) attributed it to a Western Disturbance-induced cyclonic circulation over northwest Rajasthan and adjoining Pakistan.

The moisture-carrying easterly winds from the Bay of Bengal are feeding the cyclonic circulation, it said. High temperature

and high humidity create thunderclouds which are capable of producing short, intense spells of rain and thunderstorms, an official said.

A trough extending from northwest Rajasthan to Assam will persist for a few days.

Some parts of Delhi are likely to see intermittent thunder activity over the next few days which will keep the mercury in check, said Mahesh Palawat, vice president (climate change and meteorology), Skymet Weather. A heatwave is unlikely in Delhi for a week, he said.

East and central parts of Delhi bore the maximum brunt of the storm that peppered the roads with broken tree branches.

A Delhi Police sub-inspector’s car which was parked outside the Connaught Place police station got completely damaged after a huge tree fell on it, police said.

People at several locations across the city shared reports about the strong winds snapping power and internet cables, throwing parts of the capital into chaos.

The intense storm damaged old, vulnerable structures and under-construction buildings. The historic Jama Masjid in the walled city area lost the finial of its main dome as it withered the fury of the storm.

At least five flights were diverted and 70 delayed at the Delhi airport, while long, serpentine queues of vehicles clogged the arterial roads in the city.

Two men died in separate incidents as heavy rain and storm lashed the national capital. As many as 294 calls regarding uprooting of trees in various parts of the city were received till 8pm on Monday, they said.

In the first incident reported from Central Delhi’s Jamia Masjid area, a 50-year-old man died after the a portion of balcony of his neighbour’s second floor property fell over him due to heavy rain and storm.

The deceased, identified as Kailash, was a resident of Jama Masjid area, police said.

Deputy Commissioner of Police (Central) Shweta Chauhan said, “A call from Sanjeevan hospital in Daryaganj was received by Jama Masjid police station at about 6 pm regarding a male person being brought dead.”

The incident took place when Kailash was roaming outside his house, she said, adding that his son Himanshu brought him to hospital where doctors declared him dead.

No foul play is suspected in the death and proceedings under Section 174 of CrPC are being conducted, the DCP added.

In the second incident that took place in north Delhi’s Angoori Bagh area, a 65-year-old homeless man, identified as Basir Baba, died after a peepal tree fell on him. He was declared brought dead at Trauma Centre, said Deputy Commissioner of Police (North) Sagar Singh Kalsi.

In the same area, two passersby — Devender and Neeraj — were rescued near Kalkattiya gate as the peepal tree fell over them too, he added.

In another instance, three members of a family, including a one-year-old child, were rescued after a neem tree fell on a Creta car near Kabootar Market, Kalsi said.

A family of three including a child rescued after their car was trapped under a tree following hailstorm in Delhi’s Kabutar market area: Delhi Police pic.twitter.com/91mUb1fwZu

Chetan Mehrotra, 37, along with his wife and the child, got trapped inside the car after the tree fell on their vehicle, he said.

With input from PTI