Queen Elizabeth II funeral: Thousands of police, hundreds of British troops and an army of officials made final preparations for the Queen’s state funeral on Monday – a spectacular display of national mourning that will also be the biggest gathering of world leaders for years.

At Westminster Hall, where the queen is lying in state, the constant stream of mourners paused for 60 seconds as people observed the minute of reflection in deep silence.

In Windsor, where the queen will be laid to rest on Monday evening (UK time) after her funeral at Westminster Abbey, some have set up small camps and chairs outside Windsor Castle, with plans to spend the night there to reserve the best spots to view the queen’s coffin.

Family by family, thousands of people kept joining the line around the clock, braving chilly overnight temperatures and waits of up to 17 hours in a queue that stretched for over 5 miles (8 kilometers.)

Monday has been declared a public holiday in honor of Elizabeth, who died on September 8 at 96 after 70 years on the throne. Her funeral will be broadcast live to over 200 countries and territories worldwide and screened to crowds in parks and public spaces across the country.

Police officers from around the country will be on duty as part of the biggest one-day policing operation in London’s history. 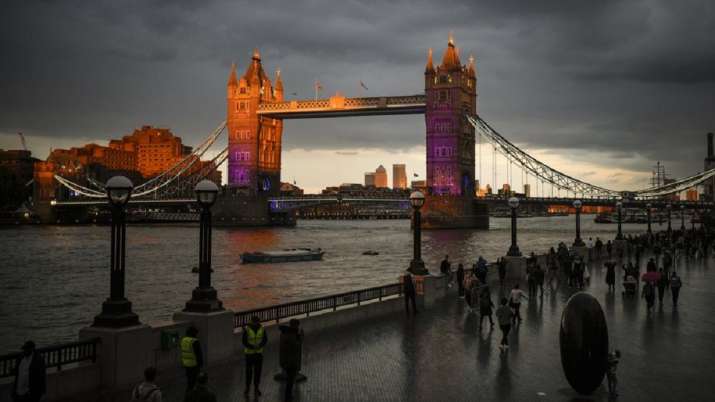 The lying-in-state continues until early Monday morning (UK time) when the queen’s coffin will be moved on a gun carriage pulled by 142 Royal Navy sailors to nearby Westminster Abbey for the funeral, the finale of 10 days of national mourning for Britain’s longest-reigning monarch.

After the service Monday at the abbey, the late queen’s coffin will be transported through the historic heart of London. It will then be taken in a hearse to Windsor, where the queen will be interred alongside her late husband, Prince Philip, who died last year at 99.

Large screens across the parks of the UK and many cinema chains are being prepared to screen the state funeral of Queen Elizabeth II.

The UK’s first state funeral in 57 years follows a strict protocol and will be steeped in military traditions, with rehearsals being undertaken for many days.

The Department for Culture, Media and Sport (DCMS) said there will be public viewing areas set up in London and Windsor, where the Queen will be laid to rest later on Monday – a public holiday across the UK.

Cinemas across the UK are also opening their screens to show the funeral – bringing together local communities to commemorate.

The queue of mourners will close at 6.30 am (UK time) on Monday morning for preparations of the state funeral, being attended by hundreds of world leaders, royals and representatives of community organisations, including Indian President Droupadi Murmu who arrived in the UK on Saturday evening.

The Queen, who died aged 96 at her Balmoral Castle residence in Scotland on September 8, will be buried in a private royal ceremony beside her late husband, Prince Philip, at the King George VI Memorial Chapel on Monday evening.

On Saturday, her eight grandchildren – Princes William and Harry and their cousins Zara Tindall, Peter Philips, Princesses Beatrice and Eugenie and Lady Louise Windsor and Viscount James Severn – observed a vigil by her coffin even as thousands continued to file past to pay their respects.

King Charles III and Prince William also made a surprise appearance to greet members of the public in the queue to thank them for their condolences and for enduring the long hours of waiting on foot to pay their respects.

Charles’ wife, Queen Consort Camilla, has paid tribute to her late mother-in-law in a moving television interview to be aired on Sunday.

How LinkedIn became a place to overshare