Promoting ASEAN Relevance in 2023? – The Diplomat 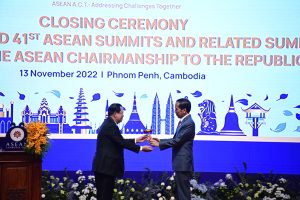 As always, the new year has heralded a new chairmanship for the Association of Southeast Asian Nations (ASEAN). Indonesia’s President Joko “Jokowi” Widodo attended a symbolic handover of the ASEAN presidency in November at the closing ceremony of the 40th and 41st ASEAN summits in Phnom Penh. He takes the Chair from Cambodian Prime Minister Hun Sen, who led ASEAN under the theme “Addressing Challenges Together.” Indonesia’s theme for the ASEAN Chair will be “ASEAN Matters: Epicentrum of Growth.” It will focus on strengthening ASEAN’s institutional capacity and effectiveness, becoming an anchor for global stability, and an international law enforcement actor.

The new ASEAN theme shares parallels with Cambodia’s chairmanship, which focused on ASEAN collective action and the overcoming of the various challenges facing the region. These included the COVID-19 pandemic, major power rivalry between the United States and China, ongoing maritime and territorial disputes, and the effects of climate change. Looking back at Cambodia’s time as ASEAN chair, it is clear that many of these challenges are still to be resolved. ASEAN made very little progress in tackling the political and humanitarian crisis in Myanmar, which was triggered by the military seizure of power in 2021. Hun Sen initially wanted to engage the junta, despite reservations from other ASEAN members. This policy showed little success, resulting in Myanmar’s generals being banned from ASEAN meetings until they showed progress on the implementation of the bloc’s Five-Point Consensus peace plan.

In further attempts at diplomacy, Hun Sen also offered to mediate peace talks between Russia and Ukraine on the sidelines of the ASEAN summits held in November. This included a request that Ukrainian President Volodymyr Zelenskyy deliver a video statement during the summit. Attempts to enhance ASEAN’s reputation as a peace broker were scuppered when Russian President Vladimir Putin refused to travel to Phnom Penh to attend the concurrent East Asia Summit. Zelenskyy’s video statement was also canceled due to a lack of consensus among ASEAN members. There was some consolation, however, with Ukraine boosting its political ties with ASEAN by becoming a signatory of the grouping’s Treaty of Amity and Cooperation.

Attempts to conclude a Code of Conduct between China and ASEAN members in the South China Sea also continued to stagnate in 2022. Cambodia previously blocked mention of the dispute from ASEAN statements, notably in 2012 and 2016, when it maintained that the disputes were bilateral and should be resolved between the claimant states and not by ASEAN as a whole. Cambodia’s historic stance on the dispute and its close relationship with China made the likelihood of it leading to a resolution unlikely. Despite leaders meeting at the ASEAN summits in November, there has been limited progress on finalizing a code.

Indonesia assumes the ASEAN chairmanship riding high on its success as G-20 President in 2022. Despite major obstacles to the presidency, including the war between Russia and Ukraine and the global economic instability caused by COVID-19, Indonesia hosted a successful summit that launched a $1.4 billion Pandemic Fund to support low and middle-income countries to tackle future global health threats.

This has given Jokowi’s leadership a diplomatic boost. Hopes are high that Indonesia can replicate this success as ASEAN chair. Indonesia has a degree of political clout in ASEAN that some previous chairs have lacked. It is one of the five founding members of ASEAN and is often looked upon as the de facto leader of the association. It is also a major regional power that has exhibited strong economic growth since the waning of the COVID-19 pandemic. The G-20 was Indonesia’s bid to extend its regional power to the international level. This will be important if Jokowi wants to address the many challenges facing the ASEAN region.

Jokowi alluded to some of these challenges at the summits in Phnom Penh in November. He stated that ASEAN “must be a region with robust, inclusive, and sustainable economic growth.”  He also argued that it “should not let current geopolitical dynamics turn into a new Cold War in our region,” but should “become a peaceful region and anchor for global stability.” This suggests that ASEAN’s economic recovery from the COVID-19 pandemic and the navigation of tensions in the U.S.-China relationship will be high on his agenda for 2023.

Indonesia will also be tasked with finding a solution to the crisis in Myanmar. Compared to Cambodia, Indonesia has adopted a more critical stance of the military government. Indonesia’s Foreign Minister Retno Marsudi blamed the junta for failing to resolve the conflict ahead of the ASEAN Summit in November. The following month, she stated that “ASEAN must not be dictated by the Myanmar military junta” and that the Five-Point Consensus was ASEAN’s only track of engagement with Myanmar.

The Indonesian government this week announced plans to establish a special envoy’s office to coordinate ASEAN’s handling of the conflict. The move indicates a tougher stance towards the junta compared to that of Hun Sen. Whether Indonesia can garner the necessary regional consensus for this approach remains to be seen. Thailand hosted talks with junta ministers last month, with foreign ministers from Laos, Cambodia, and Vietnam also in attendance. The remaining ASEAN members did not send representatives to the talks, suggesting discord within ASEAN over the degree of acceptable engagement with the junta.

It is also unclear whether Indonesia can maintain ASEAN neutrality in the face of growing great power competition between the U.S. and China. The ASEAN members have been increasingly pulled between these competing powers. U.S. defense chiefs attempted to win over Indonesian officials in a meeting held after the G-20 Summit in November. Secretary of Defense Lloyd Austin discussed interoperability and the deepening of defense ties during the meeting. Indonesia’s foreign minister refused to be drawn into any binding agreement, emphasizing “that Indonesia always takes the position of trying to maintain the best relationships with all nations.” Indonesia’s traditional position of non-alignment in international relations will likely come under increasing pressure as rivals U.S. and China seek regional allies.

If ASEAN wants to remain relevant in 2023 and beyond, member states must work together to find solutions to the problems impacting the region. This includes effectively addressing the Myanmar humanitarian crisis, coordinating post-COVID-19 economic recovery, agreeing on a Code of Conduct for the South China Sea, and tackling climate change. ASEAN’s poor track record at responding to these challenges undermines its claim to centrality in the Indo-Pacific. This provides an opening for external partnerships such as the Quad or the AUKUS trilateral security dialogue, which have bypassed ASEAN altogether in their attempt to enhance regional security. The task for Indonesia as ASEAN chair will be to overcome the divisions within ASEAN to solidify the bloc’s role as a credible regional actor.