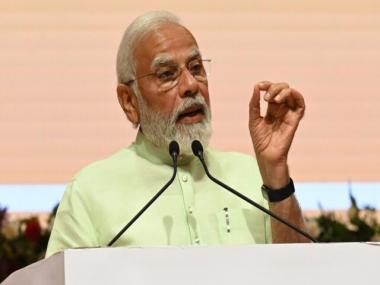 Prime Minister Narendra Modi addressed the 89th edition of Mann Ki Baat on Sunday at 11 am.

During his radio address to the nation, he talked about the start-up culture of India and the importance of a mentor in the same. He also shed light on the upcoming International Yoga Day for which the countdowns have been going on across the world.

This radio address comes at a time when the Prime Minister completed eight years in office on 26 May.

In the 88th episode, the Prime Minister had recalled the contributions of former PMs of the country while mentioning the recently inaugurated “Pradhan Mantri Sangrahalaya” in the national capital.

PM Modi shed light on the ‘Yoga for humanity’ theme for Yoga Day, on 21 June.

“On 21st June, the world will mark Yoga Day…the theme this year is ‘Yoga For Humanity. I urge everyone to be a part of Yoga day, and make Yoga a part of your daily lifestyle,” says PM Modi.

One of the ways to do so would be to mark it at an iconic place of your town, village or city. This way, you can promote Yoga and tourism. #MannKiBaat pic.twitter.com/3gIzmDqBrG

He also talked about the different themes for international Yoga Day across the world.

“This time I have come to know about some very innovative examples being held on ‘Yoga Day’ in the country and abroad. One of these is Guardian Ring – will be a very unique programme,” he said.

“Indian missions in different countries will organize yoga programs at sunrise according to the local time there. The program will start from one country to another. The continuous journey will go on from east to west, then like this, it goes on. will remain,” he added.

“The streaming of these programs will also be added one after the other, that is, it will be a kind of Relay Yoga Streaming Event. You too will definitely watch it.”

The Prime Minister talked about his recent visit to Japan and said that the Japanese people have an incredible interest in Indian culture. He spoke of Hiroshi Koike, who travels to one country in Asia and produces parts of the Mahabharata with local artists and musicians there. Through this project, he has done productions and given stage performances in nine countries including India, Cambodia and Indonesia.

During today’s #MannKiBaat the Prime Minister recalls his recent Japan visit in which he met three interesting individuals who are passionate about Indian culture.

Highlighting that the number of unicorns has struck a century mark on 5 May, PM Modi said, “Our unicorns are diversifying and the world of startups is reflecting the spirit of new India, with entrepreneurs also coming from small cities and towns.”

Forty-four out of total unicorns were formed last year; even in the period of pandemic our startups continued to create wealth and value, said PM Modi.

Comparing the trend of the growth of Unicorns in India with developed countries, including USA and UK, the Prime Minister said that the average annual growth rate of Indian Unicorns is more than those of the USA, UK and many other countries which manifest the entrepreneurial spirit and living force of India’s youth.

He further said that last year India had 44 unicorns and this year, the country built 14 unicorns.

He said that the good thing about Indian Unicorns is that they are diversifying and are operating in many fields like E-commerce, Fin-Tech, Ed-Tech, Bio-Tech.

The Prime Minister said that India’s startup ecosystem has penetrated to the ruler and grassroots levels.

“Today, India’s start-up ecosystem is not limited to just big cities; entrepreneurs are emerging from smaller cities and towns as well. This shows that in India, the one who has an innovative idea, can create wealth,” he added.

“I am confident that in the coming future we will witness startups reaching new heights in India. Right mentoring can take a startup to new heights. India has many such mentors who are committed to help bring more startups in the country,” he said.

“Right mentoring is very important when it comes to startups. Sridhar Vembu, is one such example, who is connecting rural youth to the startup world. Vembu has recently received the Padma Award. He himself is a successful entrepreneur, but now he has also taken up upon himself the task of grooming other entrepreneurs. Shridhar has started his work from a rural area,” PM said.

PM Modi also expressed concern over garbage dumps in the Kedarnath Temple areas and urged the people to ensure that the surroundings are kept clean.

“The holy pilgrimage of Char Dham in Uttarakhand is currently underway. Thousands of devotees are taking part in Char Dham Yatra and especially going to the Kedarnath Temple. But, I have also seen that some devotees were disappointed after they came across filth on route to Kedarnath. Going on a holy pilgrimage and coming across a heap of filth is not right,’ said PM Modi while also mentioning that some pilgrims have also been cleaning the nearby areas where they have been staying during the Yatra.

“Just as pilgrimage is important, ‘teertha sewa’ is also crucial. I would also say that without ‘teertha sewa’, a pilgrimage is also incomplete. There are many people in Devbhoomi Uttarakhand who are engaged in the ‘sadhana’ of cleanliness and service,” he said.

PM Modi lauded the efforts of Manoj Bainjwal, hailing from Rudra Prayag, who for the last 25 years has taken it upon himself to look after the environment.

PM Modi also mentioned Champa Devi from village Devar, who has been teaching waste management to women of the village.

“Champa Devi has planted hundreds of trees and through sheer hard work she has created a forest full of greenery,” added PM Modi.

“Wherever we go, let us maintain the dignity of these pilgrimage sites. Purity, cleanliness and a pious environment… we should never forget these and for that, it is imperative that we abide by the resolution of cleanliness. A few days later, the world will celebrate the 5th of June as ‘Environment Day’. We should run positive environment campaigns around us and this is a never-ending task. This time, you should join everyone together – you should certainly make some effort for cleanliness and tree plantation. Plant a tree yourself and inspire others too,” added PM Modi.

PM Modi called upon the people to support the women-led Self Help Groups (SHGs), which “will also give impetus to the self-reliant India campaign”.

Highlighting the potential of the country’s artisan community, the Prime Minister said that SHGs promote women empowerment and give impetus to the ‘Atmanirbhar Bharat Abhiyan’.

PM Modi said, “A few days ago I found an interesting and attractive thing which is full of colours and creativity of the countrymen and their artistic talent. It is a gift sent to me by an SHG from Thanjavur, Tamil Nadu. This gift bears the fragrance of Indianness and the blessings of Matri-Shakti – a glimpse of her affection for me. This is a special Thanjavur Doll, which also has a GI Tag. I offer special thanks to the Thanjavur Self-Help Group for sending me this gift imbued with the local culture.”

PM Modi said the Thanjavur Doll is scripting a new saga of women empowerment. He said women’s SHG stores and kiosks are also opening up in Thanjavur. Because of this, the lives of many poor families have changed, said PM Modi, adding that with the help of such kiosks and stores, women are now able to sell their products directly to the customers.

He further said, “These stores of Women SHGs have opened up at very prime locations in Thanjavur. Women themselves are taking full responsibility of their upkeep as well. Apart from GI products like Thanjavur Doll and Bronze Lamp, these women-led SHGs, also craft toys, mats and artificial jewellery. Due to such stores, the sales of GI products, as well as handicraft products, have seen a significant rise. Through this campaign, not only have the artisans got a fillip, but the women are also getting empowered by a rise in their income.”

He informed that the initiative has been named ‘Tharagaigal Kaivinai Porutkal Virpanai Angadi’ and 22 Self-Help Groups are associated with this initiative.

‘Mann ki Baat’ is a radio programme, aired on All India Radio on the last Sunday of every month, in which PM Modi interacts with the listeneres.