The four charges were filed against Ressa and her news site Rappler by President Rodrigo Duterte’s administration in 2018. 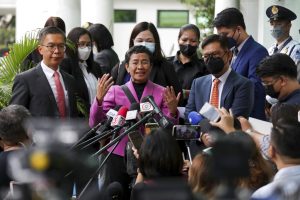 Filipino journalist Maria Ressa, center, one of the winners of the 2021 Nobel Peace Prize and Rappler CEO, speaks to the media after a court decision at the Court of Tax Appeals in Quezon City, Philippines Wednesday, Jan. 18, 2023.

A tax court in the Philippines has acquitted the Filipino journalist Maria Ressa and Rappler, the news organization she founded in 2012, of four charges of tax evasion that were filed by President Rodrigo Duterte’s administration. In an 80-page decision, the three judges of the Court of Tax Appeals ordered the acquittal due to the “failure of the prosecution to prove their guilt beyond reasonable doubt.”

Ressa’s victory brings to an end the case filed by the Bureau of Internal Revenue in March 2018, claiming that Rappler evaded tax payments when it raised capital through its partnership with two foreign investors. But Ressa’s supporters, as well as most objective observers, have dismissed the charges as a political confection designed to silence one of the Duterte administration’s most persistent critics.

“Today, facts win. Truth wins. Justice wins,” Ressa said in a statement following the verdict. The Nobel laureate described the charges as “a brazen abuse of power, political harassment against journalists trying to hold power to account.” “This acquittal is not just for Rappler,” she added, “it is for every Filipino who has ever been unjustly accused.”

The acquittal is a victory for Ressa, quashing four of the seven legal cases that were brought against the 59-year-old by the Duterte administration. These also include cyber-libel charges and an alleged violation of foreign ownership rules. Ressa is currently on bail as she appeals a six-year prison sentence handed down in 2020 for a libel conviction. If found guilty on all four tax evasion charges, she faced up to 34 years in prison.

Widely considered one of the Philippines’ most prominent journalists, Ressa has racked up a long list of accolades in recent years. She has been lauded for her publication’s close scrutiny of President Rodrigo Duterte, particularly his administration’s use of social media disinformation and its bloody “war on drugs,” a campaign of murder that resulted in the extrajudicial killing of thousands of people.

The quality of Ressa’s work, and the ferocity of the reaction that this has provoked from Philippine ruling elites, has made her plight something of an international cause celebre. In 2021, she was awarded the Nobel Peace Prize, jointly with Russian journalist Dmitry Muratov, with the prize committee hailing her as “a fearless defender of the freedom of expression.”

In a statement issued today, Hold the Line, an international coalition formed in support of Ressa and Rappler, said that it “welcomed” the acquittal, but called for the remaining charges against her and Rappler to be dropped.

“This verdict indicates that President Ferdinand Marcos Jr. can hit reset on his predecessors’ vast campaign of media repression,” the coalition’s steering committee said in the statement. “We hope we are seeing the beginning of an end to the previous administration’s strategy to instrumentalize the courts as a means to undermine independent news organizations and damage journalists’ credibility.”

The persecution of Rappler and Ressa reflects the worrying deterioration of the Philippines’ media landscape. Despite having a restive and hard-hitting Manila press corps, the Philippines ranked a lowly 147 out of 180 countries in the 2022 World Press Freedom Index and is one of the most dangerous nations in Asia in which to be a journalist. Notably, this was only slightly worse than the country’s rank in 2015, the year before Duterte took office.