Obama Speaks at COP26, Says Not Enough Progress on Climate


Former U.S. President Barack Obama told the U.N. Climate Change Conference in Glasgow on Monday that most nations failed to meet their commitments made in the 2015 Paris Climate Conference agreement and the world is nowhere near where it needs to be in confronting climate change.

Speaking during the second full week of the talks – known as COP26 – Obama said that while the Paris conference and subsequent agreement showed what is possible and created a framework from which to address the challenges of the climate crisis, most nations failed to be as ambitious as they needed to be.

‘The escalation, the ratcheting up of ambition that we anticipated in Paris six years ago has not been uniformly realized,’ Obama said. He called it ‘particularly discouraging’ that the leaders of China and Russia – two of the largest emitters – declined to even attend the conference, and both nations have demonstrated what he said ‘appears to be a dangerous lack of urgency’ on climate change. 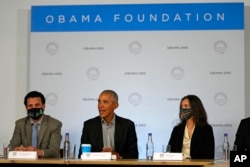 Former U.S. President Barack Obama sits next to Nima Tisdall from Denmark, right, and Rachid Ennassiri from Morocco during a roundtable meeting at the COP26 U.N. Climate Summit in Glasgow, Scotland, Nov. 8, 2021.

China is the world’s biggest carbon emitter. Its president, Xi Jinping, last week called on other nations to ‘step up cooperation’ and act on climate targets. Xi, however, offered no new commitments. The comments came in a statement to the conference.

Obama said advanced economies like the United States and Europe need to be leading on this issue, but so do China, Russia and India. He said, ‘We can’t afford anybody on the sidelines.’

Addressing young people, Obama encouraged them to ‘vote like your life depends on it, because it does.’ Obama said he understood their cynicism about politics, but that governments around the world will not act unless they feel pressure from voters.

The 26th U.N. climate conference – or Conference of the Parties, or COP – is Obama’s first since he helped deliver the 2015 Paris climate accord, when nations committed to cutting fossil fuel and agricultural emissions fast enough to keep the Earth’s warming below catastrophic levels.

Climate summits since then have been less conclusive, especially as the U.S. under President Donald Trump dropped out of the Paris accord. President Joe Biden has since rejoined. Last week, Biden announced ambitious change commitments as he attended the Glasgow conference. The U.S. is the second biggest greenhouse gas emitter after China.

Some information for this report was provided by The Associated Press, Reuters, and Agence France-Presse.

In China, Buying That Toy Gun Could Get You Arrested