Myanmar Junta to Carry out Death Sentences Against Activist, NLD Lawmaker – The Diplomat

The executions of democracy activist Ko Jimmy and former NLD lawmaker Phyo Zayar Thaw will likely be the first of many to come. 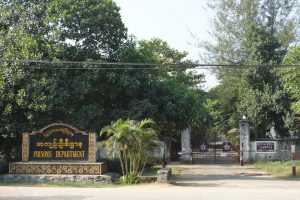 The entrance to Insein Prison in Yangon, Myanmar.

Myanmar’s military junta announced on Saturday that it will execute two opposition political activists as part of its crackdown on the anti-coup resistance – in what rights activists say is the first use of the death penalty for years.

In January, a military tribunal convicted veteran democracy activist Ko Jimmy and former National League of Democracy (NLD) lawmaker Phyo Zayar Thaw of treason and terrorism and sentenced them to death. Junta spokesperson Zaw Min Tun confirmed to the BBC’s Burmese language service over the weekend that the pair’s appeals had been rejected and that the executions would be carried out.

“At this time, that appeal was rejected so the death sentences are going to be implemented,” he said, though he did not give any indication on when the executions will take place.

While Myanmar’s military has certainly not shied away from the use of lethal force to achieve its political ends, it has not used the judicial death penalty in several decades. According to London-based rights group Amnesty International, the last execution in Myanmar took place in 1988, during the crackdown on that year’s protests. While numerous death sentences have been handed down in Myanmar since, these have usually been commuted, Amnesty claims.

But there are good reasons to expect that these executions will not be the last carried out by the military dictatorship that has ruled Myanmar since the February 2021 coup. Since transferring civilian judicial authority to a raft of special or existing military tribunals, the military administration has sentenced dozens of anti-coup activists to death, including an estimated 86 in 2021 alone. As these cases work their way through the system (and with scarce chance of successful appeals), more convictions and executions are almost certain. Indeed, according to Radio Free Asia, the rejection of Ko Jimmy and Phyo Zayar Thaw’s appeals coincided with the handing down of another death sentence to a young man in Shan State.

The specific claims against Ko Jimmy, a member of the 88 Generation Students Group that came to prominence during the 1988 protests, and Phyo Zayar Thaw, who won election to parliament during the NLD’s landslide election victory in 2015, are also capacious enough to apply to just about anyone involved in the resistance.

Since launching a nationwide armed uprising against the military junta that seized power last February, anti-junta People’s Defense Forces (PDFs) have launched increasingly effective attacks against the military and its proxies, including civilians believed to be acting as informants. Given that the military junta has on several occasions made it clear that it views the PDFs, and the National Unity Government (NUG) with which they are loosely aligned, as “terrorist” groups, there is a chilling possibility that anyone belonging to any of these groups could be plausibly sentenced to death.

While past death sentences have been commuted, there are fewer reasons for the military junta to take the path of leniency. One is the fact that it is already alienated from the foreign governments most likely to protest the move. The other is the increasingly desperate situation that it faces, as PDFs and other anti-regime forces continue to make inroads.

The pending executions have been roundly condemned by observers of the human rights situation in Myanmar. Amnesty International described the revival of the death penalty as “one of many appalling ways the Myanmar military is attempting to sow fear among anyone who opposes its rule,” while the United Nations has said Friday it was “deeply troubled” by the decision and urged – rather fruitlessly, it must be said – the junta to drop the charges against “those arrested on charges related to the exercise of their fundamental freedoms and rights.”

"One Of The Most Underrated Cricketers": Virender Sehwag Leads Birthday Wishes For Ajinkya Rahane