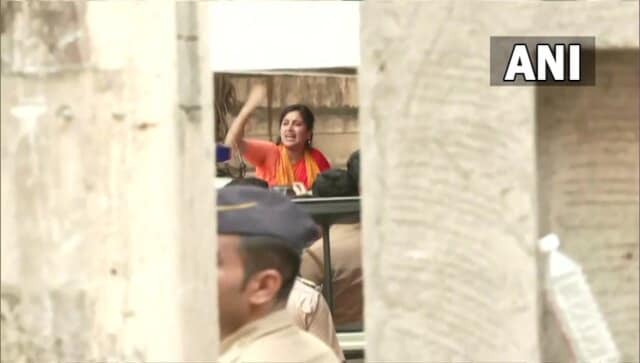 The section deals with offences related to the promotion of enmity between different groups on grounds of religion, race, place of birth, residence, language, etc., and doing acts prejudicial to the maintenance of harmony.

Earlier in the day, the Ranas called off their plan of reciting Hanuman Chalisa outside Maharashtra Chief Minster Uddhav Thackeray’s residence in Mumbai, citing that they do not want to disturb the law and order situation in view of Prime Minister Narendra Modi’s visit to the city for an event.

Maharashtra | Our aim was fulfilled, though Ravi Rana & I couldn’t reach ‘Matoshree’ (CM Uddhav Thackeray’s residence), Hanuman chalisa that was supposed to be chanted by us was chanted by bhakts outside the CM’s residence: Amravati MP Navneet Rana on Hanuman Chalisa controversy pic.twitter.com/tDdkPZcCw1

The announcement came after Shiv Sena workers in the morning broke through barricades and tried to enter the premises of the Khar residence of the Ranas, who on Friday announced their plan to recite Hanuman Chalisa outside Thackeray’s personal house ‘Matoshree’ on Saturday at 9 am. But the situation was brought under control, an official said, adding that the police later asked the politician couple not to step out of their house as the situation may escalate due to the presence of a large number of Shiv Sena workers outside their building.

#WATCH Shiv Sena workers protest outside the residence of Amravati MP Navneet Rana in Mumbai as the MP plans to chant Hanuman Chalisa along with her husband MLA Ravi Rana outside ‘Matoshree’ the residence of #Maharashtra CM Uddhav Thackeray pic.twitter.com/OR7CQQpWlk

Shiv Sena workers, who have strongly objected to the politician couple’s plan, have been camping outside ‘Matoshree’ since the morning of 22 April, 2022. Taking an aggressive stand, the party leaders and workers have said they will not let the couple go back without ‘prasad’ “if they dared to turn up”.

However, the police personnel deployed at the spot brought the situation under control and dissuaded the party workers from indulging in anything that would create a law-and-order problem, he said.

“Around 10.15 am, senior police officers visited the residence of Ranas and told them that they should not step out of their home as a large number of Shiv Sena workers were gathered outside their apartment, which may lead to a law and order problem,” the official said.

On 22 April, 2022, Mumbai police had served a notice to Amaravati MP Navneet Rana and her husband, Badnera MLA Ravi Rana, asking them not to disturb the law-and-order situation in the city.

Ravi Rana had earlier told reporters here that he had demanded the chief minister read Hanuman Chalisa on Hanuman Jayanti “to rid Maharashtra of crises and attain peace for the state,” but Thackeray had “refused” to do so.

The city police have stepped up security outside ‘Matoshree’. Barricades have been placed on the road leading to the Thackeray residence to avoid crowding, the official said.

“In order to maintain law and order situation, the police have increased security and deployed large number of personnel outside ‘Matoshree’,” the official said.

Earlier in the day, senior police officers, including zonal DCP Manjunath Singe, visited the place and took stock of security deployment, he said.

Besides ‘Matoshree’, the police also increased security at ‘Varsha’, the official residence of CM Thackeray in south Mumbai.

“We are waiting, we’ll keep Hanuman Chalisa in front of us. We’re waiting to teach them a lesson,” said former Mumbai Mayor and Shiv Sena leader Kishori Pednekar outside ‘Matoshree’.

Maharashtra | We are waiting, we’ll keep Hanuman Chalisa in front of us. We’re waiting to teach them a lesson: Former Mumbai Mayor & Shiv Sena leader Kishori Pednekar outside ‘Matoshree’ in Mumbai pic.twitter.com/HX4vcUIe9F

Talking to reporters, Shiv Sena MP Anil Desai said, “‘Matoshree’ is a temple for Shiv Sainiks. Hindutva is in Shiv Sena’s blood, nobody should teach us Hindutva. People are aware of the work done during the pandemic by CM Uddhav Thackeray-led Maha Vikas Aghadi (MVA) government.”