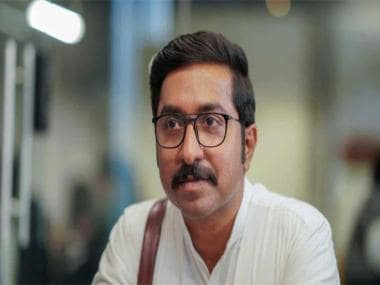 Abhinav Sunder Nayak’s Malayalam film Mukundan Unni Associates is an oddity. An interesting oddity, but nonetheless one that redefines the legal genre in cinema. We all know how corrupt lawyers can get if they allow themselves to. But Mukundan Unni, as played by Vineeth Srinivasan, is another case altogether.

He is sharp and alert. Or so he thinks. We know what he thinks because his thoughts are verbalized all through the film. In fact one of the peculiarities of this legal oddball is that Unni speaks more to us than he does to the characters on screen. And yet it wouldn’t be right to dub him as introverted .Far from i.

Unni goes for the kill with aggressive skill when he chances upon an insurance scam: stand around at a busy hospital for accident victims and convince them to sign up for fake insurance. Everyone gets a cut.

Cut reminds me, the editing (Nidhin Raj Arol, Abhinav Sunder Nayak) is razorsharp. The pace is never breathless. Even when the going gets tough, the rhythm of narration remains unchanged. The breath never quickens even when the plot turns rabidly exacerbated. This equanimity is the sly sinuous film’s greatest asset.

Next comes the screenplay. So tellingly relevant and topical and a mirror of our times, and yet Mukundan Unni’s greed is a breed apart. He is not just a product of our seedy times but also a prime casualty of that very avarice which feeds and nourishes his ambitions. A failure as a mainstream lawyer he becomes a certifiable unabashed scamster willing to go to any lengths to have his way.

Forgive me if I’ve so far given the impression that the film is a solemn treatise on corruption. It is not. It is savagely funny. When a snake invades Unni and his mother’s home Unni doesn’t drive it away: he locks it up for later use. After a while it is hard to tell which of the two is more dangerous.

As the plot progresses Unni regresses to a fullblown homicidal criminal. The murder of a fellow lawyer Venu(the ever-dependable Suraj Venjaramoodu) signals Unni’s descent into the bottomless pit of corruption. Admirers of Venjaramoodu’s acting need not despair: he keeps appearing as a ghost dost to roast Unni in a most Shakespearean manner as a manifestation of Unni’s dying conscience.

As Unni, Vineeth Sreenivasan is devastatingly deadpan. We don’t know what he is thinking . He doesn’t know what levels of depravity he is capable of.As his somewhat shifty and immensely shrewd wife—a sort of tit for tat—Arsha Chandini Baiju is pitch-perfect , as is Sudhi Koppa as Robin ,Unni’s assistant who is less corrupt than his boss

These are actors fully clued into Abhinav Sunder Nayak’s scheme to weave a web of deceit around a protagonist who is so slippery he falls into an unfathomable pit of his own making. The screening of the ambulance siren could well be clarion call for Unni’s conscience. But he is not listening.

Subhash K Jha is a Patna-based journalist. He has been writing about Bollywood for long enough to know the industry inside out.