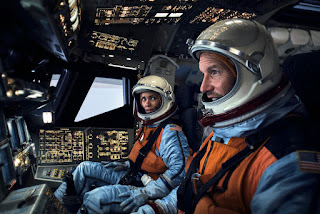 (Xinhua) In recent years, Hollywood has been striving to woo the Chinese audience by inviting Chinese actors to make an appearance, shooting scenes in China, or showcasing elements of Chinese culture.

In Roland Emmerich’s latest sci-fi disaster movie “Moonfall”, a variety of Chinese elements, including the appearance of several conversations in the Chinese language, have impressed Chinese viewers, not to mention its visual effects.

The conversations take place between an American boy and a Chinese exchange student, played by Kelly Yu who featured in the 2017 Chinese comedy “The Ex-File: The Return of the Exes.”

Opening on March 25 in China, “Moonfall” tells of how a team of heroes, including two seasoned astronauts, try to save Earth from the collision of the moon, driven by an unknown force.

Emmerich already has a strong reputation, built on such blockbusters as “2012” and “The Day After Tomorrow,” a fact that has drawn the crowds. But the new movie has also gained attention due to its easily identifiable Chinese elements.

One moviegoer surnamed Zhao was impressed by the re-entry capsule used by the team at the end of their mission. Many fans of Chinese manned space missions believe that the capsule is “made in China.”

Such capsules have appeared in TV broadcast programs showing the successful landing of Chinese astronauts returning to Earth after their missions in space.

“The Chinese are making contributions in the face of a disaster. This not only demonstrates the solidarity of mankind, but also shows the country’s international status and influence,” Zhao said.

Chinese elements can also be seen in Emmerich’s disaster film “2012,” as well as “Transformers: Age of Extinction,” directed by Michael Bay.

As its overall national strength grows, the influence of China’s science and technology output, as well as the Chinese language, has been constantly improving, said Rao Shuguang, president of the China Film Critics Association.

Rao attributed the appearance of Chinese elements in Hollywood blockbusters partly to the size of the Chinese market. In 2021, the total box office takings hit around 47.26 billion yuan (about 7.4 billion U.S. dollars), and the total number of screens reached 82,248, with both categories remaining the world’s largest, according to the China Film Administration.

Ji Shaoting, founder of the Future Affairs Administration, an incubator of sci-fi talents and movies, said that, with its theme of aerospace and moon exploration, “Moonfall” can easily arouse the curiosity of Chinese audiences.

The film netted 100 million yuan at the Chinese mainland box office in 10 days, and stayed in the top spot on the chart for several days.

Rao, however, pointed out that most Hollywood movies present Chinese elements in a symbolic way. Many are not properly introducing the essence of Chinese culture, he said, adding that there is still some room for improvement.

Market observers expressed the hope that Hollywood will gain a deeper understanding of China and do a better job in cross-cultural communication so as to present Chinese elements more effectively.