THIRUVANANTHAPURAM: Though it is said that two doses of the COVID vaccine are required for maximum immunity, it would seem more positive cases are reported among fully-vaccinated people compared to those who have only taken a single dose.

The puzzling trend came to the notice of experts after the health department published the state’s COVID data since September 29. According to health experts, a combination of factors such as hybrid immunity (acquired through a combination of vaccination and infection), age and testing strategy could have led to the difference. There are various studies that indicate how hybrid immunity is superior when compared to the immunity received from double dose of vaccination.

Dr Althaf A, an epidemiologist and associate professor at Government Medical College Hospital, Manjeri, pointed out that hybrid immunity among youngsters is far better than that of fully-vaccinated adults.  “There are chances that a lot of youngsters were infected in the second wave. When they get a single dose following the infection, it will result in better immunity,” he said.

Vaccination among older people started on January 16, while those of the age group 18-45 started receiving jabs only on May 17 after the second wave started. Health experts opined it was too early to say that the immunity offered by vaccines waned over a period of time resulting in breakthrough infections.

“Antibody levels could be lower for people who took vaccines early on. Nevertheless, this will not diminish the effectiveness of the vaccine,” said Dr Purushothaman Kuzhikkathukandiyil, professor of pediatrics at Manjeri MES Medical College.

To be sure, more people with a history of vaccination have tested positive for the virus when compared to the unvaccinated group. However, this is directly related to the increase in the state’s vaccination coverage, as already 95 per cent of the eligible population has received the first dose and 53 per cent is fully vaccinated. Dr Althaf pointed out the health department data could not capture every trend such as reinfections and breakthrough infections. 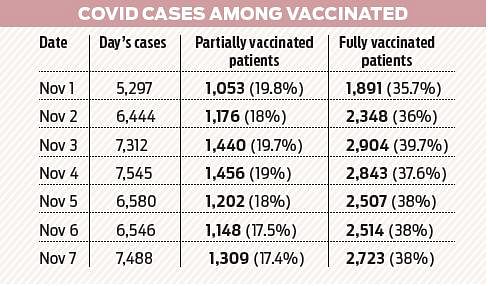