Modi Puts Kashmiri Demands on the Backburner – The Diplomat 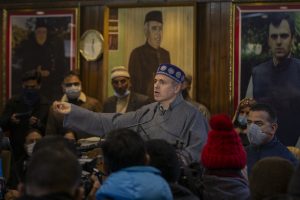 Former chief minister of Jammu and Kashmir Omar Abdullah speaks during a meeting with his party workers a day after the District Development Council elections results in Srinagar, Indian-administered Kashmir, December 23, 2020.

Two years after the erstwhile state of Jammu & Kashmir (J&K) lost its autonomy and statehood, India’s Bharatiya Janata Party (BJP) government is conjuring up new exercises and institutions to snatch away the bare minimum political agency that local Kashmiris hold.

“The Delimitation Commission has been constituted in Jammu and Kashmir and preparations are on for Assembly elections in the future,” Prime Minister Narendra Modi said in his speech on the occasion of India’s 75th Independence Day on August 15 in New Delhi.

Indeed, members of the Delimitation Commission recently visited the Kashmir valley and met various political stakeholders. However, questions abound over the government’s intentions.

Essentially a process of redrawing electoral boundaries to reflect demographic changes that happen over time, delimitation is often controversial when new boundaries are drawn to favor one party or another in elections, called gerrymandering in the United States. The Delimitation Commission is supposed to be an independent body.

The body that will delimit electoral constituencies in J&K is headed by a former Supreme Court judge and while five parliamentarians from J&K are associate members, their recommendations are not binding on the commission.

Elections in the erstwhile state of Jammu and Kashmir have been due since 2018, when the BJP withdrew support from the then People’s Democratic Party-led government.

On June 24, Modi met 14 political leaders from the valley in New Delhi to discuss J&K’s future. This was the first time that the government had engaged Kashmiri leaders after having detained them for months following the August 5, 2019 revocation of Article 370. At the June meeting, Kashmiri leaders called for the restoration of J&K’s autonomy. They are unanimous in their view that J&K’s statehood must be restored.

Since that meeting, the Modi government has acted swiftly on the delimitation process. It has not made any commitment on restoration of statehood before the assembly polls.

National Conference (NC) parliamentarian Justice Hasnain Masoodi, who withdrew from meeting with the commission members, criticized the Modi government’s decision to go ahead with the delimitation exercise when “a petition challenging the government’s scrapping of Article 370 is pending before the Supreme Court. “It goes against the principle of constitutional propriety,” he said.

Mudassir Shahmiri, additional spokesperson of the NC pointed out that while the Modi government claimed that Article 370 was revoked “to completely merge J&K with the Union of India, it is treating J&K “differently by bringing in separate delimitation commissions” for Assam and Kashmir.

A senior PDP leader and former J&K cabinet minister, who spoke to The Diplomat on condition of anonymity, pointed out that the delimitation exercise is aimed at “normalizing the post-August 5 situation through electoral intrusion.” It also “structures the disempowerment of Muslims,” he said.

Kashmiris fear that the BJP’s Hindu agenda would allot lopsided weightage to non-demographic factors during the delimitation exercise, killing Kashmir’s political dominance in terms of seats.

The BJP is trying to bring back the era of Hindu rulers and Muslim subjects, the senior PDP leader said. The predominantly Muslim former princely state was ruled by a Hindu king until its accession to India.

The delimitation exercise could result in the BJP winning more seats in J&K. Thus Muslim-dominated Kashmir would come under the rule of a party that espouses Hindutva.

BJP leaders are enthusiastic about the delimitation exercise.

The party’s spokesperson in J&K, Abhijeet Jasrotia, told The Diplomat that “[Hindu majority] Jammu suffered at the hands of Kashmiri leaders” over the decades. The delimitation exercise, he says, will “accord to Jammu its stolen rights of representation.”

Many local Kashmiri leaders are viewing the delimitation exercise as yet another attempt by the Modi government to downgrade the Kashmir valley and redraw constituencies in Jammu’s Muslim-majority Chenab Valley and Rajouri district in Pir Panchal region.

This redrawing of electoral constituencies, they say, would be done in a way to create more constituencies in Hindu-dominated areas to increase the number of seats that the BJP wins.

While Kashmir’s mainstream political parties want statehood to be restored, the BJP government is determined to press ahead with elections but only after constituencies are redrawn.

Want to be happier in life? Eat more fruits and vegetables | Health News