Some 700 people living in the vicinity of the Deepak Nitrite’s chemical manufacturing facility, where the fire broke out, have been shifted to safer places, officials said 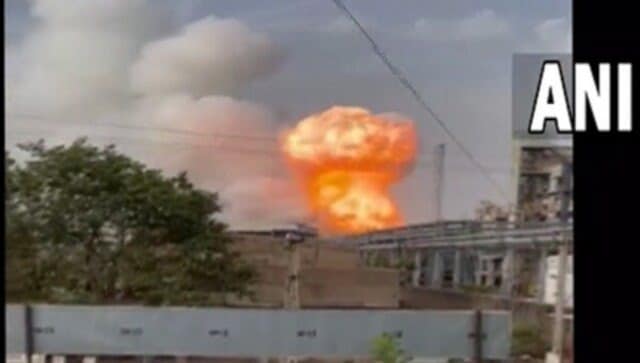 A portion of Deepak Nitrite’s chemical manufacturing facility in Nandesari industrial area on the outskirts of Vadodara city in Gujarat was engulfed by a major fire on Thursday evening, said officials.

Visuals from the spot showed smoke billowing from the chemical manufacturing facility.

Seven workers have been hospitalised after inhaling smoke, while some 700 people living in the vicinity of the factory have been shifted to safer places, officials said.

“Efforts are on to douse the massive fire, in which no injury has been reported. Seven workers who had inhaled the smoke were shifted to a nearby hospital for treatment. As a precaution, nearly 700 people living in the rural areas adjoining the factory have been shifted to safer places,” Vadodara Collector RB Barad said.

A Vadodara fire brigade official said a powerful explosion also occurred when the fire started spreading in the factory during the evening, adding that 10 fire tenders are at the spot to douse the blaze.

The district collector said the cause of the fire was not known as yet.

Meanwhile, Deepak Nitrite Company issued a statement regarding the incident on their website. It said, “We are monitoring the situation closely. The safety and well-being of all our employees, and that of the communities around, is of foremost priority to us. All our manufacturing facilities are equipped with best-in-class systems and equipment, that ensure environmentally sustainable production. Our teams are already on-ground facilitating every possible support. Our communication channels are open 24×7, and we shall continue to provide updates and partner closely with all the relevant external stakeholders.”