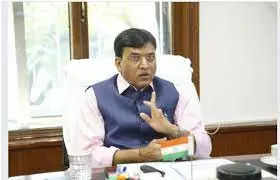 “India’s leadership in the global fight against TB continues with Minister @mansukhmandviya’s appointment as next Chairperson of @StopTB Board which supports global efforts in achieving UN goal to end TB by 2030. Leading by example remains committed to ending TB domestically by 2025,” tweeted the Permanent Mission of India at the United Nations.

Taking to Twitter, the union minister said, “Honoured to take on as the Chairman of @StopTB Partnership Board and lead global efforts against TB. I look forward to working with partners and volunteers to take sustained steps to end TB worldwide by 2030 and realise PM @NarendraModi ji’s vision of ending TB in India by 2025.”

He also lauded the initiatives of former Health Minister Dr Harsh Vardhan who was charing the board.

“I express my gratitude to the outgoing Chair of Stop TB, @DrHarshVardhan, and appreciate the initiatives taken by the partnership under his guidance. I am also looking forward to working with the incoming Vice-Chair, Austin Arinze, when he takes over on January 1, 2022,” added Mandaviya.

The Stop TB Partnership is a United Nations-hosted partnership program that aims to fight against tuberculosis collectively.

Jake Paul Vs Tyron Woodley: When & Where To Watch Boxing Match Live In India?

China cracks down on celebrity fan culture after scandals